Hank McCoy was born in Dundee, Illinois, in the United States, to Norton and Edna McCoy on February 21. His father, Norton McCoy, is employed at a local nuclear power plant before Henry's birth and was once exposed to intense nuclear radiation, which appears to have caused his son's mutation. Hank is born with a vast intellect, unusually long arms and legs, and unusually large hands and feet - a rare although the not unique case of mutant powers manifesting before puberty. His bodily proportions are comparable to those of a gorilla, and later stories reveal his nickname in school was "Magilla Gorilla".

Henry's mutation more fully manifests during adolescence, providing greater strength and agility, and although his powers allow him to briefly excel in athletics during his remaining time at school, he soon attracts the animosity of his fellow students and other non-mutant humans. As he seeks refuge, he is approached by Professor Charles Xavier, who invites him to study at Xavier's School for Gifted Youngsters. Henry recognizes the opportunities such an institution can offer him and accepts the invitation. He finds the school both a fountain of scientific knowledge and a place of sanctuary. There he is introduced to the X-Men, Banshee, Tempest, Mystique, Darwin, and Magnus who accept him into their ranks and give him the codename Beast. Alongside workouts in the Danger Room, under Xavier's tutelage, he studies subjects ranging from differential equations to Proust.

Hank leaves the X-Men shortly after his twentieth birthday, after remarking that he is no longer one of the "strangest teens of all". He becomes a research scientist at the Brand Corporation, a genetics research facility. His assistant, Linda Donaldson, quickly becomes his girlfriend. Hank isolates a "hormonal extract" allowing anyone to become a mutant for a short period of time and uses the mutagenic serum on himself to disguise his appearance while foiling an attempt to steal his research. He waits too long to reverse the process, leaving him permanently transformed. He grows grey fur, which later turns blue, all over his body and acquires pointed ears, elongated canine teeth, claws, the ability to run on walls and ceilings like a spider, enhanced senses, an accelerated healing factor, and a feral side he struggles to control. When Magnus, Mystique, and Tempest left the team as well, they became a new team called the Brotherhood of Evil Mutants in which they plan to fight against the humans with villainous intent. He briefly joins the Brotherhood of Evil Mutants when Mastermind wipes out his memory but quickly recovers. Hank soon resumes wearing his old costume, but now no longer has the need for a mask as he returned to the X-Men as their chief scientist.

Hank is also the first X-Men to join the Avengers since Magnus’ children Wanda and Pietro reform joining the Earth’s Mightiest Heroes as the first two known mutants to join the highest superhero team rank. During his time as an Avenger and Defender, he befriend with Simon, while also joined by his original X-Men teammates Warren and Bobby on latter team. 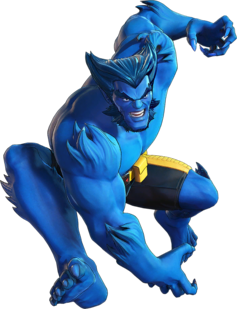