The Panther, King T'Challa, Son of T'Chaka, Coal Tiger, Mr. Okonkwo, and King of the Dead

T'Challa was born on February 16th, 1980, to King T'Chaka and Queen Ramonda in the hidden African nation of Wakanda. He also has a sister named Shuri who is born eight years later. When he was a kid, he went to a meeting with his parents with multiple world leaders. The leaders of some different countries had been unable to negotiate with T'Chaka into giving them some Vibranium. After that happened, they hired a mercenary named Ulysses Kluane aka Klaw. Upon emerging from the floor of T'Chaka's palace, Klaw killed T'Chaka. This enraged T'Challa who wounded and drove him away. Due to the death of T'Chaka, T'Challa's uncle S'Yan, T'Chaka's younger brother ruled Wakanda in T'Chaka's place until the day when T'Challa was at the right age to be sworn in as the new Chieftain of Wakanda.

He was next in line to be the king of Wakanda and Black Panther, but until he was ready to become the leader of the nation, his uncle, successfully passed the trials to become the Black Panther. While on his Wakandan walkabout rite of passage, T'Challa met and fell in love with apparent orphaned teen Ororo Munroe, who would grow up to become the X-Men member Storm. The two broke off their relationship due to his desire to avenge his father's death and to become the type of man who could suitably lead Wakanda, but they would see each other over the years when they could.

T'Challa earned the title and attributes of the Black Panther by defeating the various champions of the Wakandan tribes. One of his first acts was to disband and exile the Hatut Zeraze—the Wakandan secret police—and its leader, his adopted brother Hunter the White Wolf. He sold off small portions of vibranium to scientific institutions around the world, amassing a fortune which he used to arm himself with advanced technology. Later, to keep the peace, he picked Dora Milage ("adored ones") from rival tribes to serve as his personal guard and ceremonial wives-in-training. He then studied abroad for a time before returning to his kingship.

In 2004, the now-adult T'Challa invites the American superhero team the Fantastic Four to Wakanda, then attacks and attempts to neutralize them individually in order to test himself to see if he is ready to battle Klaw, who had replaced his shattered right hand with a sonic weapon. For their part, the Four manage to rally and stymie T'Challa in a team counter-attack, enabling the impressed King to stand down and explain himself to the team's satisfaction. After the ruler makes proper amends to the Four, they befriend and help T'Challa, and he, in turn, aids them against the supervillain the Psycho-Man. Five months later he joined the Avengers, beginning a long association with that superhero team acting as a founding member. T'Challa first battles the Man-Ape while with the group and later battled Klaw once again with their assistance. He would form close bonds with his teammates particularly Captain America, Iron Man, Wasp and Hank Pym over the next five years but the team later disbanded in 2009. He would return to fight alongside his former teammates as a member of The Ultimate Alliance against Dr. Doom and his Masters of Evil.

T'Challa was called upon by Tony Stark to join Nick Fury's task force to help take down Doctor Doom.

After Doom was defeated, he returned to Wakanda. The Panther remained neutral during the superhuman civil war. When the Pro-Reg nanite-controlled villains revolted and a ceasefire was called, T'Challa allowed the heroes to use Wakanda as a temporary base. The heroes help him and the Dora Milaje defend the country from nanite agents, now under the moniker of "The Fold," a mind-controlled Havok, Justice, and A-Bomb, and in the process cured Venom and Green Goblin of the nanites. Black Panther later aided the heroes via comlink during the heroes' travels into the Fold Control Tower base to which during this time, Black Panther can sometimes be heard struggling to deal with other Nanite infected characters.

Slash attack with a high chance of getting a critical hit

Tackle an enemy and stab them multiple times

Black Panther jumps into the air and leaps down on his enemies doing massive physical damage with a 25% chance for an instant kill. Also boosts the damage of team's Xtreme powers by 50%

Black Panther appears near the end of the game in the Wakanda battle. He helps fight off the combined powers of Venom and Green Goblin.

Black Panther is an availavble playable character through the use of DLC.

Black Panther's Dossier can be collected within the Wakandan Palace HQ base.

As ruler of Wakanda, T'Challa has unlimited access to his country's technological and military resources.

"Black Panther" is actually a title held by the leader of Wakanda; with the office comes the right to eat a sacred herb which maximizes an individul's abilities. The current Black Panther is T'Challa, a man trained since birth to protect his country from harm. An ex-Avenger, Black Panther has fought alongside many of America's super heroes.

With their advanced technology and huge vibranium deposits, a hostile Wakanda could be a threat to the entire world. We're damn lucky T'Challa's calling the shots over there. 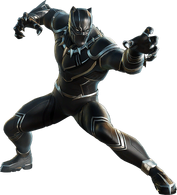 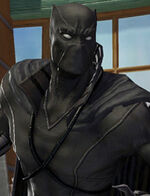 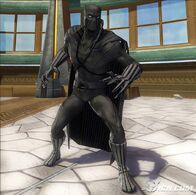