Daywalker, Switchblade, Slayer of Vampires, Leader of The Nightstalkers, and Midnight Son

Eric Brooks was born in a whorehouse in the Soho neighborhood of London, England on July, 10th 1929. Eric's mother, Tara Brooks, was a prostitute at Madame Vanity's Brothel. When Tara experienced severe labor complications, a doctor was summoned who was in actuality Deacon Frost, a vampire who feasted on her during Eric's birth and killed her. However, this inadvertently passed along certain enzymes in his own blood to the infant. This resulted in Eric's quasi-vampiric abilities, including a greatly prolonged lifespan and the ability to sense supernatural creatures, as well as an immunity to complete vampirism. Brooks' fellow prostitutes drove off Frost before he could kill the infant as well.

Eric grew up living at Madame Vanity's, and at age nine, returning home from school one December, he saw an old man being attacked by three vampires. Eric helped the old man, who used a silver cane to kill the vampires and fight off the attackers. The man was Jamal Afari, a jazz trumpeter and vampire hunter who then moved into Madame Vanity's and trained the young Eric in both music and combat.

Blade was soon able to defeat many of the weak, younger vampires that he and Afari found in abundance. Eric became an Olympic-level athlete and a formidable hand-to-hand combatant, with an expertise in edged weapons such as knives and daggers so notable that it earned him the nickname "Blade" among both his fellow hunters and the vampires they opposed, who began to fear the young hunter. One night he encounterd a type of vampire, a man named Micheal Morbius, who Blade fought but Morbius bit him. This enhanced his stregenth and he was able to overcome Morbius but he escaped.

In later years, Blade, along with Hannibal King and Frank Drake, became a frequent ally of the sorcerer Doctor Strange, and the three assisted Strange in battles with Dracula and the Darkholders and assisted in the casting of the Montesi Formula, which for a time destroyed all vampires on Earth. Blade, King, and Drake then formed the private detective agency Borderline Investigations, Inc. to combat supernatural threats. Alongside Doctor Strange, the three detectives battled the Darkholders again. Blade also rescued his close friend Safron Caulder from the Darkholders. The agency discontinued after Drake left and Blade was committed to a psychiatric hospital following a battle with a temporarily resurrected Dracula. Doctor Strange later arranged the release of Blade so that he could join Drake and King in reforming Borderline, Inc. as the Nightstalkers.

He was found trapped on Murder World and was freed by the heroes, aiding them against Arcade and later against Doctor Doom and his Masters of Evil.

After the events of MUA 1, Blade would later team up with Ghost Rider, Moon Knight, Punisher, and Doctor Strange to form the Midnight Sons. As they defend the world from Supernatural threats

>>> You must rescue Blade from Arcade's Murderworld <<<

He is located in the claw machine just before entering the bumper car tent. He will be direct to the left of the entrance to the tent.

Slash at enemies with Blade's katana

Fires four shots causing physical damage and knockback to enemies hit. +50% chance of critical hit if the enemy is stunned when hit by the attack

Blade's ultimate look has him wearing an all-black outfit as seen in the "Blade" films portrayed by Wesley Snipes, which consists of a leather trench coat, bulletproof vest, gloves, cargo pants, combat boots, a utility belt, and sunglasses. Blade also bears various straps intended for the carrying of those stakes that are so essential to killing any vampire.
Health Regen - Increases health regeneration
Striking - Increase striking

A costume consisting of a blue leather jacket, pants, boots, and gloves. In addition, Blade wears a belt in this outfit, and the red shirt he wears beneath his jacket shows partially. Interestingly, Blade does not wear dark sunglasses, which are typically a staple of his character. This is the look Blade had in the 1990's Spider-Man animated series.
Weapon damage - Increases the damage done with weapons
Health Regen - Increases health regeneration

A functional, black, all-leather ensemble consisting of bulletproof vest, pants, combat boots, and marksmanship gloves. Like in other costumes, Blade wears sunglasses, but unlike in other interpretations, the so-called Daywalker is bald. This is the look Blade had in the live-action Blade series.
Melee damage - Increases melee damage
Health per kill - Regain health per kill 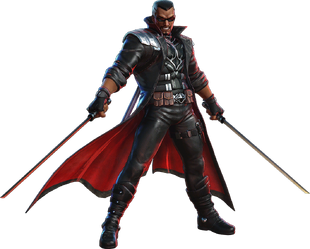 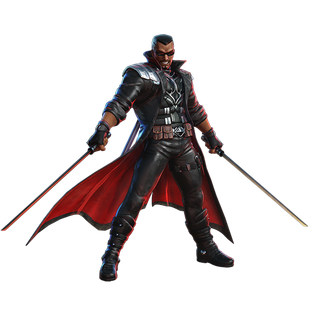 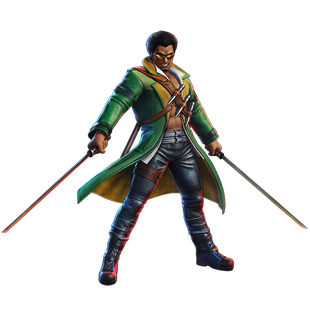 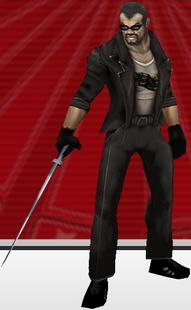 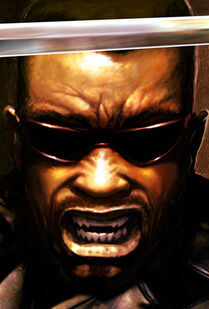 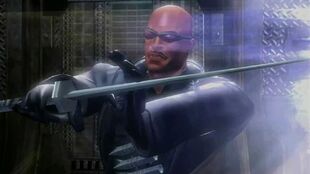 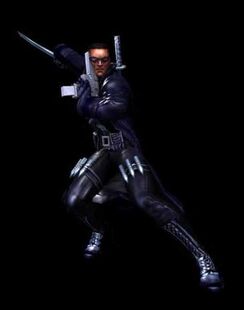 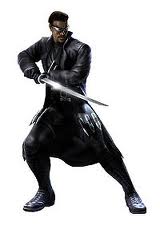