Steve Rogers was born on July 4th, 1918 in Brooklyn, New York to poor Irish immigrants, Sarah and Joseph Rogers. Joseph died of a gunshot wound when Steve was a child, and Sarah died of pneumonia while Steve was a teen. By early 1940, before America's entry into World War II, Rogers is a tall, scrawny fine arts student specializing in illustration and a comic book writer and artist.

The sickly young man later joined a secret program called Operation Rebirth, three months later. There he was given a unique formula dubbed the Super Soldier Serum and bombarded by radioactive vita-rays. He then achieved the pinnacle of human perfection in almost an instant and was dubbed the champion of the Allies: Captain America. However, a Nazi loyalist at the scene of the experiment began trashing the place, and Captain America was forced to evacuate everyone. However, he later learned that Abraham Erskine, the scientist who developed the serum died during the attack, burying the formula with him.

Captain America then became the only existing Super Soldier. He fought alongside his allies including the Howling Commandos. James Howlett, who would later go on to be the hero Wolverine and King Azzurri the Black Panther. As the war progressed, Captain America earned a name for himself as the most valuable asset of the Allies, and the nickname the sentinel of liberty, gaining a sidekick, Bucky, as well as a few arch-nemesis including Baron Heinrich Zemo, Red Skull, Wolfgang von Strucker, Nightshade, Doctor Faustus, and Madame Hydra. In 1945, Red Skull, launched a nuclear missile at a small town, forcing Captain America and Bucky to act. Bucky is seemingly killed trying to stop the bomb. Captain America, who was on the missile, defused the bomb but was flung into the ocean, where the Super Soldier Serum put him in a state of suspended animation.

In the early 21st century, the Avengers found the ice statue of Captain America and thawed him out. He then joined and helped lead the Avengers alongside Iron Man. Throughout the years he and the Avengers have taken on the likes of Loki, HYDRA, Kang the Conqueror, The Masters of Evil, A.I.M, The Mandarin, and Thanos. Cap also offered his services to his old war buddy and former Howling Commando Nick Fury. He was operating at as a S.H.I.E.L.D agent that Cap first encountered Sharon Carter, SHIELD' s Agent 13, who would become his paramour. In the last days of the Avengers time together, he became a high ranking agent of the organization. Years later, he became a core member of the Ultimate Alliance.

When Dr. Doom formed the Masters of Evil to steal the powers of Odin and rule the universe, Captain America joined Fury's Ultimate Alliance, and was one of the first four metahumans to come to the defense of the U.S.S. Alpha Helicarrier, where he found the Winter Soldier planning to shoot the Helicarrier's own guns into the engine along with Radioactive Man, both of whom are stopped by Cap and the team. Cap stayed with the team throughout the mission and finally stopped Dr. Doom who is left to the mercy of the gods.

Two years after Doom's Defeat, Captain America joins Nick Fury on an unsanctioned attack as part of the main strike team on the country of Latveria and against the new prime minister, Lucia Von Bardas, who is presumed killed when they blow up Castle Doom. Lucia came back a year later as a cyborg, however, to destroy New York, however, she was stopped.

2 weeks after that, the Anti-Reg forces are lead into a trap set by S.H.I.E.L.D. During the resulting fight, the Nanite network that kept the Thunderbolts in check gained sentience, calling itself the Fold. The network had the Thunderbolts brought to the plant (Venom (Mac Gargan), Green Goblin, Bullseye, and Lady Deathstrike) set up timed bombs to blow up the plant. Captain America received a call from Fury about what happened at the plant. There wasn't evidence to have Cap believe him. Soon the White Star decided to stage a jailbreak in Prison 42. Eventually, the Registration Act was repealed and the Nanites used by the Pro-Reg forces began to form towers across the world, however, they were stopped, and Captain America and Iron Man became friends again, recreating the Ultimate Alliance.

Throws shield at an enemy. Hold button and use left t stick to steer

Spins around, cutting through enemies and objects in a radius with his energized shield

Uses shield as a battering ram

Taps into a reserve of strength and agility beyond that of peak human development, increasing speed and damage

Reduce the damage taken by the entire team

Throws shield in a giant arc, circling around and striking all enemies in the area with massive physical damage

The Classic interpretation of Captain America's look in mainstream Marvel continuity starting from the Silver Age onward, this costume is highly reminiscent of the Ultimate one, although the reds of the costume are brighter, the star-emblem on the chest is slightly larger, the cuffs of the gloves are looser and less tight-fitting around the arms, and the miniature ornamental wings on Cap's hood are present.
Critical Chance - Increases melee critical hit chance
Max Energy - Increases maximum energy

A costume originally worn by Steve Rogers during a time when a rival named John Walker usurped his Captain America identity, this suit was later worn by Walker himself, who used it to create a new name for himself as the US Agent. This outfit is a highly modified reworking of Captain America's Classic costume. The major differences are that the blue areas of the suit have been recolored to be black, the utility belt has been recolored red, the star and stripes on the front of the costume have been redesigned to be horizontal and integrated, and the iconic shield is missing its central star-emblem.
Skill Boost - Gives entire team chance to execute powers at 3 ranks higher than normal
Melee Damage - Increases melee damage

Captain America's original getup from the Golden Age, when he fought alongside the militaries of the U.S.A. and the other Allied nations against Nazi Germany in Europe and the Japanese Empire over the Pacific. A prototype of the Classic costume, Cap's WW2 look is highly similar to that design, the main differences being that the suit's colors are darker and more muted, the utility belt is made from brown leather, and the star-emblem on the chest is slightly smaller, closer to its size in the Ultimate costume. The shield is also completely different in shape and design, lacking the smooth, circular quality of the shield accompanying all other costumes.
Patriot's Strength - Increases max health
Momentum Rate - Gain momentum from melee combat faster 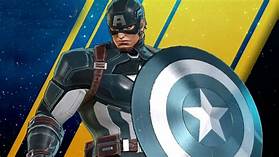 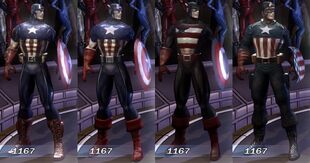 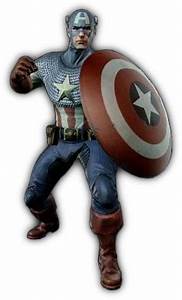 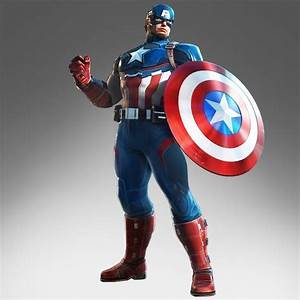 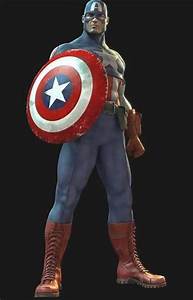 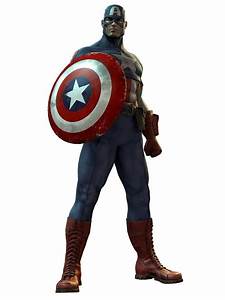 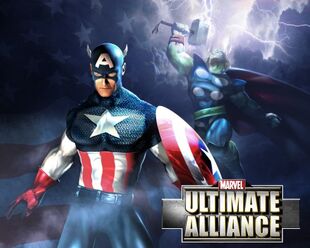 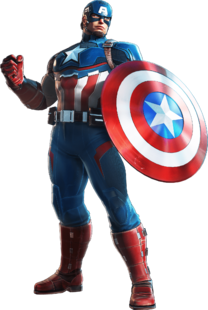