Carol Danvers was born in Boston, Massachusetts on March 13th, she is an officer in the United States Air Force and later became a Security Chief at NASA. She became a member of SWORD, where Danvers met Dr. Walter Lawson, the human alias of alien Kree hero Captain Mar-Vell. In a later story, Danvers is caught in the explosion of a Kree device after trying to get close to Captain Marvel. Although Captain Marvel manages to save her life, Danvers sustains serious injuries. She is experimented on by Mar-Vell and Kree Scientists and used her in multiple tests in their labs. It is revealed that the energy exposure from the explosion of a device called the "Psyche-Magnetron" caused Danvers's genetic structure to meld with Captain Marvel's, effectively turning her into a human-Kree hybrid.

Her successful career at NASA was severely damaged because of these recent events. Due to her continued inability to control superhuman incursions, she was removed and reassigned to a minor NASA facility near Chicago. Even this did not last as Carol was demoted to a mere security guard and returned to Cape Canaveral after the superhuman Nitro had raided the base. Due to her plummeting career, she resigned from NASA.

Now living off an accumulated salary, Carol wrote an angry tell-all expose on NASA, burning many bridges. The best selling book briefly made Carol a celebrity and she began working as an editor for Woman Magazine, a publication owned by the Daily Bugle. However, she developed a dual personality due to the Psyche-Magnitron's alterations. She would black out and become a Kree warrior, instantaneously donning a costume which the Psyche-Magnitron had created for her to ease her body's changes.

She continued to experience these blackouts, but they did not stop her from pursuing her career as a writer and editor. She took the name Ms. Marvel after Mar-Vell. Her fragmented mind eventually recovered with the help and treatments of the extradimensional Hecate and the Kree fanatic Ronan the Accuser. She established herself as one of New York's premiere superheroes working with Spider-Man, the Defenders, and The Avengers. She later became a member of the Ultimate Alliance.

She was called in by Nick Fury to stop the attack on the helicarrier. Ms. Marvel became a member of the Ultimate Alliance. She aided the team against Dr. Doom and the Masters of Evil.

While investigating weapons shipments underneath New York, Ms. Marvel gets captured by Shocker & Latverian soldiers under the command of the now-cyborg Lucia von Bardas. She was freed by the Alliance, and helps them to the weapons cache. During the Superhuman Civil War, Ms. Marvel joined Iron Man's Pro-Regsitration forces.

After the events of Marvel: Ultimate Alliance 2, albeit this game being a reboot universe to differentiate from the first two games, she changes her name to Captain Marvel, whereas Kamala Khan as the new Ms. Marvel.

Fires a blast of energy into the ground causing radial damage. Reduces attack speed of enemies

Shoots energy beam that can split off and hit multiple enemies

Slows time for everyone except Ms. Marvel and her allies

A Massive flash of light does energy damage and stuns all enemies on screen. If an enemy is already stunned they take a critical hit for 50% of their current health

The Ms. Marvel costume was worn by Sharon Ventura during her stint with the identity. It is thematically similar to Carol Danvers's Original costume. It consists of a red spandex shirt with a yellow design pattern vaguely resembling an "M," a domino mask, a blue domino mask, blue elbow-length rubber gloves, blue spandex shorts, and blue thigh-high boots. As this "costume" is actually a different character, Ms. Marvel hair color is not blonde, but brunette.
Photon Damage - Increases the damage of all powers
Resistance - Increases all resistances

Carol Danvers's new look from after she was experimented on by the Brood and transformed into an emotionally detached cosmic mutate named Binary. Binary possesses the unusual physical features of being red-skinned and spiky-haired, and her costume consists of a white halter top/shorts combo, elbow-length gloves, and thigh-high boots.
Max Energy - Increases maximum energy
Photon Damage - Increases the damage of all powers 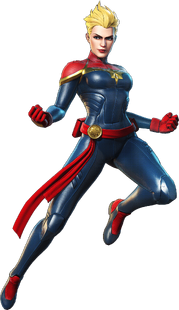 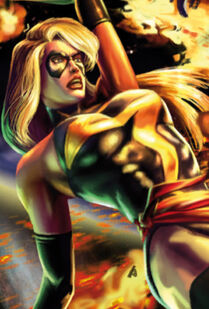 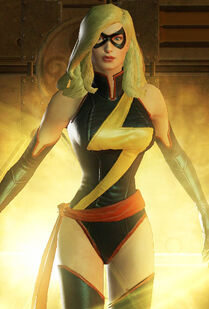 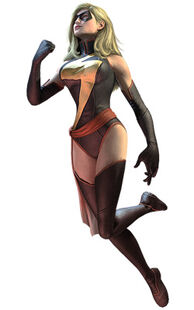 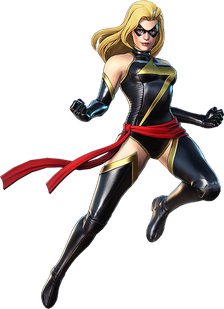 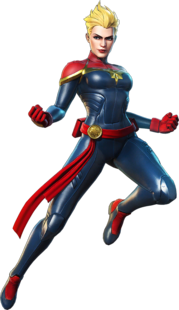