Piotr Rasputin was born on a Soviet collective farm called the Ust-Ordynsky Collective near Lake Baikal in Siberia on May, 1st. He lived there with his mother Alexandra, father Nikolai, and sister Illyana. His older brother, Mikhail, had been a Soviet cosmonaut and had apparently died in a rocket accident. Peter's superhuman powers manifested during his adolescence while saving his sister from a runaway tractor. He was then contacted by Professor Charles Xavier, founder of the X-Men. Peter Rasputin was part of the second generation of X-Men, formed by Charles Xavier to save the original X-Men from the living island Krakoa. He agreed to leave the farm community where he was born to go to the United States with Xavier. Xavier gave him the name Colossus. After the battle was won, Colossus remained in the U.S. with the new X-Men.

Colossus is part of the team that battles Doctor Doom after he gains Odin's powers. Unfortunately, he is defeated along with the rest of the team. He is the first hero to be taken over by Doom when he discovers that he can use Odin's power to corrupt minds. When Nick Fury's team of heroes attacks Castle Doom, Colossus confronts them along with a dark version of Captain America. He is defeated and is presumably returned to normal when the heroes defeat Doom and Odin regains his powers.

During the Superhuman Civil War, he sided with Captain America's Anti-Registration team and his White Star guerrilla army, strongly believing that no mutant could possibly justify Registration. Colossus was one of the many among the White Star who was ambushed at Stark's chemical plant, where he and Dagger defended against an elite team of Pro-Registration heroes, though they were defeated. He was taken under the control of the Nanites of the Fold when they began to conquer the world, and was a member of a team which was titled as the "Insidious Alliance." He was presumably freed from their control when Nick Fury under the Fold's control and the main control spire was destroyed.

Devastating two-hit punch that will stun enemies for a time.

Colossus pounds the ground with his fists, damaging enemies in an increasing radius.

Jumps into air and comes back down hard doing radial damage.

Charges forward, tackling an enemy and beating him mercilessly.

Debuff that will frighten enemies for a time.

Reduces damage taken by the team.

Leaps in the air and comes back down doing massive radial damage.

The costume worn by Colossus in the now-defunct Ultimate Marvel line, in essence just a variation on a single basic design for almost all male X-Men characters in the Ultimate Universe. This ensemble consists of a form-fitting black shirt with X-emblems sewn over the shoulders, black military pants, yellow knee-high boots with legbands, a yellow belt, black rubber gloves, and a chest-affixed, golden utility harness.
Critical Chance - Raises the chance of landing critical hits
Melee Damage - Increases damage done with melee attacks

The appearance most closely associated with Colossus in mainstream continuity, consisting of a metallic red-and-yellow tunic fastened by a belt, and red knee-high boots and wristbands. This was Colossus's debut appearance, and remains to this day his most popular outfit.
Boost XP - Increases XP gained
Boost Stats - Boosts body, focus, and strike stats

A more modern take on Colossus's mainstream look, similar in arrangement to the Ultimate costume but in coloration to the Classic one. This costume is comprised of a form-fitting red-and-yellow shirt with X-emblems sewn over the shoulders, red pants, black boots, a belt with an X-emblem buckle, and black rubber gloves.
Melee Damage - Increases damage done with melee attacks
Power Damage - Increases damage done by powers

A gaudy retro-esque costume made up of a yellow tunic fastened by a belt with an X-emblem buckle, yellow elbow-length leather gauntlets, and yellow boots with blue leggings and yellow legbands.
Power Damage - Increases damage done by powers
Max Health - Increases maximum health (Maxes out at 25%) 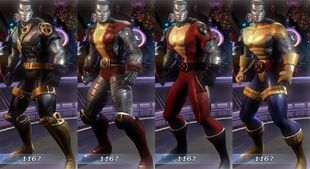 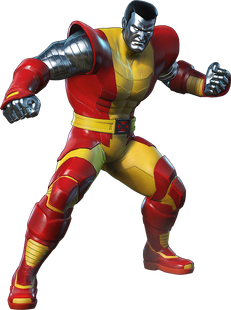 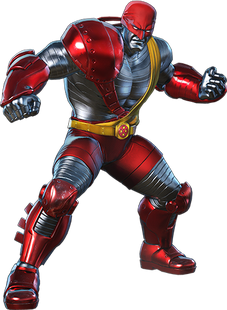