Scott Summers was born in Anchorage, Alaska on September 18th. When Scott was a boy growing up in Anchorage, Alaska, his father, USAF Major Christopher Summers, took the family for a flight in their de Havilland Mosquito. It came under attack by an alien Shi'ar spaceship. As the plane went down in flames, Scott's parents fastened him and his younger brother Alex into a parachute and pushed them off the plane, hoping that they would survive. The boys become wards of the state and are separated. When Scott's powers manifest uncontrollably he runs away from the orphanage and wanders before being taken in as ward by Charles Xavier. Xavier provided Scott with a visor made of ruby quartz to help him control his powers in the field.

As Cyclops, Scott became deputy leader of the X-Men and while he was a skilled tactician, Scott's social skills were lacking. He became good friends with Jean Grey, a young telepath who became his closest friend and second in command. For a long while, Scott refused to admit, even to himself, that he had feelings for Jean, afraid he would be hurt again or that his optic blasts would hurt her - or anyone else he cared about. What Scott did not know was that Jean actually had a crush on him too, but was too shy to make a move. Eventually, they revealed their passion for each other and began to date.

As an adult, he continued to search for his brother but was unsuccessful even with the professor using Cerebro. His determination and tactical mind are what made him a great leader of the X-Men for many years. In 2012, he along with fellow X-Men members with Wolverine, Jean Grey, Storm, Iceman, Deadpool, and Colossus became apart of the Ultimate Alliance.

Scott was still in a relationship with Jean Grey at the time of the first game and was one the first to learn her and Nightcrawler's abduction. He wanted to go and rescue her in Mephisto's realm but Charles felt like he was too eager and emotional to lead the mission so other heroes and other X-Men were sent in to save her. At the time of her apparent death, Scott temporarily left the team to mourn her death alone. He later returned to help battle Dr. Doom as a way of avenging her but, he and the other heroes were defeated and so was he. In the aftermath, he attempts to blast Doom, But it does nothing and Doom turns the blast back on him, knocking him out. Doom then uses his new powers to turn Cyclops into one of his minions along with Psylocke and Colossus. He fights the heroes alongside Psylocke but is knocked out. After being defeated, he returns to his normal self and became the leader of the X-Men once again.

He does not appear in the game but it is rumored that during Lucia Von Bardas' attack on New York, Cyclops helped evacuate the civilians. He also defeated The Scorcher, who was holding some civilians hostage. During the Superhuman Civil War, he stayed with Professor X and helped him hide students at X-Mansion.

Cyclops' basic eyebeam attack. Push the left stick forward to cause more damage, back to cause less to a wider area.

Launch a continuous stream of the optic beam toward an enemy.

Powerful kick combo that sends the enemy flying into the air.

Cyclops fires a series of short blasts that will eventually ricochet of walls once powered up.

Powerful optic blast that explodes on contact sending out splash damage to nearby enemies.

Increases damage to all beam attacks and increased critical chance.

Damage received is reduced for the entire team.

Cyclops spins around 360 degrees incinerating the room in an enormous optic blast. 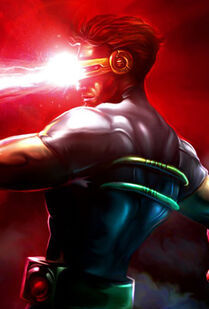 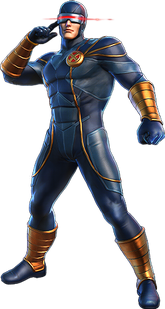 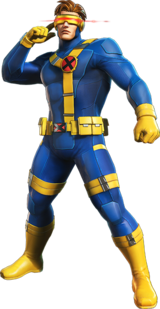