Matt Murdock was born on September, 4th in Hell's Kitchen, New York to boxer "Battling Jack" Murdock, who raised a young Matthew by himself. Jack instills in Matt the importance of education and nonviolence with the aim of seeing his son become a better man than himself. In the course of saving a blind man from the path of an oncoming truck, Matt is blinded by a radioactive substance that falls from the vehicle. The radioactive exposure heightens his remaining senses beyond normal human limits, and giving him a kind of “radar” sense, enabling him to detect the shape and location of objects around him.

In order to support his son, Jack Murdock returns to boxing under the Fixer, a known gangster, and the only man willing to contract the aging boxer. When he refuses to throw a fight because his son is in the audience, he is killed by one of the Fixer's men. Having promised his father not to use violence to deal with his problems, Matt gets around that promise by adopting a new identity and receives training from an old blind man by the name of Stick who taught him to use his body as a physical force. Matt later went to law school to became a lawyer and own his own firm with his best friend Franklin "Foggy" Nelson and his then-girlfriend Karen Page but never forgot about the promise he made to his father. Adorned in a yellow and black costume made from his father's boxing robes and using his superhuman abilities, Matt confronts the killers as the superhero Daredevil, unintentionally causing the Fixer to have a fatal heart attack.

Matt later gained a new red suit and a multi-purpose billy club. For years he fought against organized crime in his city and made many enemies along the way such the Kingpin, Bullseye, Gladiator, Stilt-Man, The Owl, and the criminal organizations The Hand, and the Maggia. With his enemies, he also gained a large number of allies like the Assassin Elektra who was also trained by Stick, Spider-Man, Blade, Moon Knight, Luke Cage, Iron Fist and The Punisher. He and Elektra later became close and the two fell in love with each other but their love life was cut short by Bullseye who wanted to prove he was better than her and grew a strong hatred for Matt. Bullseye was successful in killing her but is later resurrected by her former master. After defeating Bullseye, He became romantically involved with the Black Widow for a brief but intimate time before ending their relationship now knowing that Elektra was alive. Three years later, both He and Elektra became members of the Ultimate Alliance and helped save the world from Dr. Doom and his Masters of Evil.

When the U.N.N. Alpha Helicarrier was attacked by Doctor Doom and his Masters of Evil, Daredevil responded, alongside his ex-girlfriend Elektra. The two helped their fellow superhumans stop Bullseye, and he joined the Ultimate Alliance. He aided the Alliance to protect the Omega Base, liberate Atlantis, save the X-Men from Murderworld and Mephisto's realm, break the siege of Asgard, steal a crystal from the Shi'ar Empire, defeat Galactus and stop an Odin-Powered Doctor Doom from taking over the world.

After Doom's fall, Nick Fury took Daredevil with him on an unsanctioned attack on Latveria, assigning him to Bravo Team, alongside his former lover the Black Widow. He and his team lost radio communications with Fury, forcing him to send Wolverine and Spider-Man to ensure that the job got done. Daredevil and his team proceeded to invade the Tinkerer's lab and destroy it, escaping just as Castle Doom exploded behind them. Daredevil would fight in the Superhuman Civil War that would follow and eventually rejoin the Ultimate Alliance to defeat the Nanite controlled Fold.

>>> To unlock Character, the Player must find all five Daredevil action figures <<<

Attacks with his baton. Stuns enemies when charged

Uses baton to fling an enemy into the air

Forcefully extend baton toward an enemy

Spin around with his baton causing knockback

Slow down time except for Daredevil and his allies

Whips both batons around doing physical damage to nearby enemies

In the tutorial, when Iron Man and Captain America go off and you're left with Spider-Man and Wolverine, you unlock Daredevil and a bunch of others. 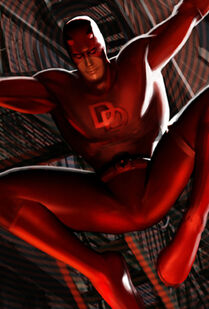 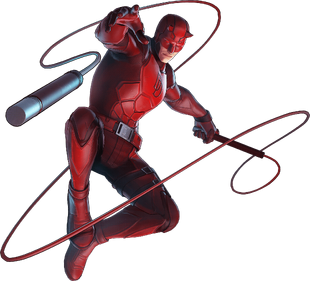