Deadpool is a mercenary and this "merc with a mouth" is an expert in weapons and martial arts - he uses guns, grenades, a device that lets him teleport, and his distinctive twin katanas, as well as hand-to-hand combat. Despite his questionable sanity and off-beat sense of humor, Deadpool is one of the world's deadliest assassins, and one of Marvel's most unforgettable characters. Deadpool also has a mental illness that makes him hear two separate voice in his head.

He can also break the fourth wall, so he knows that he's in comics or in this case a videogame. It is possible that he has a thing for Cherry Blossoms.

Wade Wilson was born in Vancouver, British Columbia on October, 23rd. Wade had conflicting memories of his childhood. He once recalled that his father abandoned his mother while she was pregnant with him and she took out her anger on him until, as an adult, he beat her instead. He later recalled that his mother died when he was five and that his father, an army officer, became abusive, causing Wade to grow up to be a thug and criminal. When his father got his act together and tried to rein in his son, one of Wade's friends shot and killed him.

However, he told a writer that his father was a teller of bad jokes who abandoned him and his mother while he was a boy. His mother turned to humor, alcohol and home shopping networks as a coping mechanism. He believed that he ran away from home so that his mother wouldn't need to spend what little money she had left on him. However, it was eventually revealed that his parents were still together, living in Canada and had kept Wade's room as he had left it but Wade himself did not recognize the house, his parents or his room when he returned there as an adult.

After leaving home, he appears to have joined the U.S. Army Special Forces but despite his superior skills, he was drummed out for not following orders that conflicted with his moral code. In America, Wade met and fell in love with mutant teenage prostitute Vanessa Carlysle, with whom he shared dreams of a better life. Wilson was subsequently hired by Middle Eastern interests to assassinate a blind British Government operative named Althea, also known as Blind Al. Upon arrival to the Zaire base where she was stationed, he killed everyone except for Al who had fled. Learning that he had developed 34 inoperable cancerous tumors, Wilson broke up with his girlfriend Vanessa rather than force her to remain with a terminally ill man. He even gave up his chemo treatments, not wishing to prolong things. Back in Canada, he was offered hope in the form of Department K, a special weapons development branch of the Canadian government.

Wilson became a test subject in Department K’s branch of the joint U.S./Canadian superhuman enhancement project, the Weapon X Program; his cancer was temporarily arrested via the implantation of a healing factor derived from another Department K agent, the mutant adventurer Wolverine. Wilson was active in a covert field unit alongside the near-invulnerable Sluggo and the cyborgs Kane and Slayback. Vanessa herself was later affiliated with the team after having manifested mutant shapeshifting abilities, calling herself Copycat. As a result, he was rejected from the Weapon X Program and sent to the Hospice, allegedly a government facility where failed superhuman operatives were treated.

However, unknown to the Canadian government, the Hospice’s patients served as experimental subjects for Doctor Killebrew and his sadistic assistant Ajax (known then as the Attendant), with the patients placing bets in a "Deadpool" as to how long each subject would live. Killebrew subjected Wilson to various torturous experiments for his own deranged satisfaction. Wilson shot him in the chest with two automatic rifles, leaving him for dead. Taking the name Deadpool, he escaped from the Hospice with his fellow patients.

At sometime before the game, Deadpool was trapped in Murderworld by Arcade, where he beat up some clowns, and then talked to Dark Spider-Man about online dating, before beating him up too.

When the Masters of Evil attacked the S.H.I.E.L.D. Helicarrier, Deadpool was amongst the many heroes to come to aid in the defense of the vessel. During this event, Deadpool tried to charge S.H.I.E.L.D. agents money to get them out of their rooms. Deadpool stayed with the team until the defeat of Dr. Doom.

Later when the White House was attacked by Mercenaries under the command of Titanium Man, Deadpool arrived, to supposedly "see the Cherry Blossom Festival", he then attacked the Ultimate Alliance for "Laughing with their eyes!" (although it is likely he is talking to the player). After his defeat, Deadpool helped the team rescue the captive senators and fight Titanium Man before agreeing to rejoin the team.

If he chooses to register, Deadpool apparently gets $20.00. If he chose Anti-Registration, he replies to Commander Maria Hill by saying "Par for the course, crazy lady! Besides I can always go the other way on my next playthrough". When the Fold hivemind nanotech invaders invade, Deadpool helps the Ultimate Alliance beat them. And they eventually do.

Pull out two pistols and shoot, chance to knock down enemies hit. (Press and hold the button).

Throws several grenades that explode when within 3 ft of enemy or when the time expires.

Taunts nearby enemies lowering their defenses and causing them to attack.

Jump in the air and do a 360° spin taking down every enemy in sight.

Deadpool's look from the now-defunct Ultimate Marvel line, which borrows many cues from Deadpool's Classic costume but incorporates more black into the design and darkens the red areas. This leather costume consists of a red-and-black shirt and mask, black pants, red gloves, a utility belt, and a leg strap used to carry small knives. Uniquely, Deadpool's katana in this appearance is pitch-black, whereas it is made of reflective steel with every other costume.
Max Energy - Increases the maximum energy
Health Regen - Increases health regeneration (+2% maximum)

A less colorful getup accentuating the assassin/mercenary element of Deadpool's character and downplaying his comedic side. This costume is made up of a black skintight shirt, red-and-black military pants and boots, black rubber gloves, a white utility belt, a leg strap used to carry a pistol holster, and a red-and-black mask with an identical design but reversed color scheme to his Classic costume's mask.
Health Regen - Increases health regeneration (+1.2% maximum)
Critical Strike - Increases critical strike chance

A variation of Deadpool's Classic look virtually identical in most respects but with a slightly darkened shade of red and a redesigned mask, which is fully red save for black outlines around the lenses and extends outwards in the back, giving it more of a ninja-like feel.
Weapon Damage - Increases damage done by weapons
Resist All - Increases all resistances

All around bonus. It's the best one ever.

Allows for more frequent use of powers. Requires Pro-Reg.

After years of repeated genetic experimentation and a sordid mercenary career, Deadpool has accumulated an imperfect healing factor and the ability to teleport. Despite his line of work, Deadpool is well-known for his offbeat sense of humor, earning the nickname "The Merc with a Mouth". Deadpool's sanity has been called into question a number of times; he's frequently expressed the belief that he is in a comic book, or occasionally, a video game.

If this guy wasn't a raving lunatic I'd say he was one of the most dangerous men on the planet. but given that he can barely string two thoughts together, he ranks as just another super-powered nuisance.

In an attempt to capitalize on the SRA, Deadpool has taken to hunting unregistered superhumans for bounty money.

Finding the Anti-Reg forces to be vastly more amusing than their Pro-Reg counterparts, Deadpool has joined Captain America's resistance movement.

DETAILS
Though conventional etiquette would prevent "Wadey" from wearing a mask at dinner, for some reason, people are more comfortable when he leaves it on.

(Inspired by Mark Bagley's design as seen in Ultimate Spider-Man #93.) 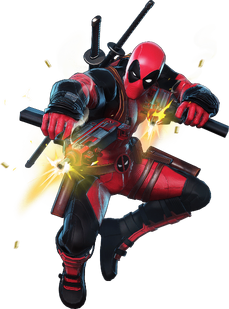 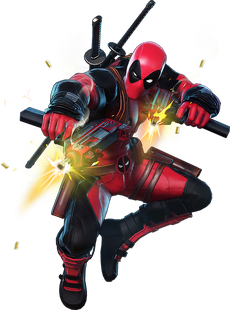 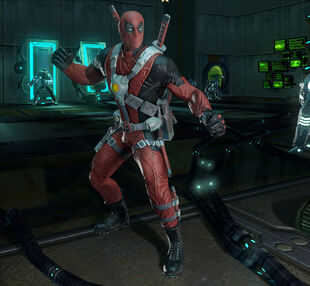 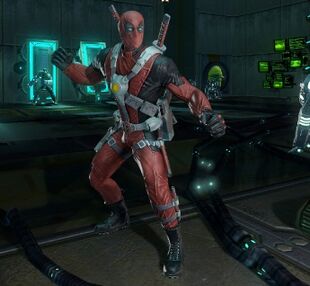 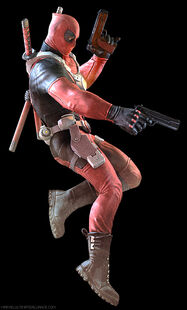