Mastery of magic, Utilizes mystical artifacts, such as the Cloak of Levitation and the Eye of Agamotto, Genius-level intellect, Skilled martial artist, Gifted Physician, and Surgeon

Doctor Stephen Vincent Strange is the Sorcerer Supreme. His home the Sanctum Sanctorum is the base for players in Act II.

Stephen Vincent Strange was born to Eugene and Beverly Strange on November, 8th 1930 while the couple was vacationing in Philadelphia. His parents were originally from England and had dual citizenship. He grew to be an egotistical doctor who only cares about wealth from his career. The bones in his hands are shattered in a car crash, leading to extensive nerve damage. His hands tremble uncontrollably rendering him unable to perform surgery. Too vain to accept a teaching job, Strange desperately searches for a way to restore the motor function in his hands.

After exhausting his funds, Strange becomes a drifter. Doctor Octavius was once his associate, and was present overhearing the news of Strange’s downfall. Depressed and still searching, Strange happens to overhear two sailors discussing a hermit called the Ancient One (who is actually the Earth's Sorcerer Supreme) in the Himalayas, who can cure any ailment. Strange nearly broke, seeks out the aged mystic. The Ancient One refuses to help Strange due to his arrogance but senses a good side that he attempts to bring to the surface. He fails, but Strange's heroism appears when he discovers the Ancient One's disciple, Baron Mordo, attempting to kill the old man.

After a confrontation with Mordo leads to him being shackled with restraining spells preventing him from either attacking Mordo or warning the Ancient One, Strange desperately and selflessly accepts the Ancient One's offer to become his apprentice to have some hope of helping the old man. The Ancient One, pleased at Strange's sincere change of heart, accepts the westerner and promptly frees him from the restraining spells while explaining he was aware of Mordo's treachery all along. Mordo left the Ancient One's palace to seek greater power. The two rivals would clash often in the future. It was during this time that Strange passed a test against Death itself.

As a reward, Strange was given ageless life and an ankh-shaped mark on his forehead that would only appear when his life was in dire jeopardy. The Ancient One himself had attained near-immortality by passing this test over 600 years earlier. After this, The Ancient One made him the head of the New York Sanctum Santorum in New York's Greenwich Village where He was attended by Wong, another sorcerer who was under the guise of a servant. Strange would serve as an occasional consultant to local and federal authorities when they faced a threat or situation they face alone. Strange initially remained aloof from New York's superhero community, fighting his battles against Nightmare and Baron Mordo in secrecy but he would give his assistance to them if they needed it. Over the years, his reputation grew, and Strange even became an honorary member of the Avengers and lead a superhero team known as The Defenders.

Strange was aware of the return of his old nemesis Baron Mordo and him finding new allies in Masters of Evil. Nick Fury approached him about setting up a temporary headquarters at the Sanctum Santorum, he agreed only because of Mordo's involvement and Doom's deal with the demon Mephisto. When the X-Men members Jean Grey and Nightcrawler were captured, he assisted the Ultimate Alliance in rescuing them at Mephisto's Realm but during their mission, they come across Ghost RIder whose power was being drained by an inverted pentagram. Strange decides to take his place in the pentagram as he was the only one that could withstand power-draining capabilities of it. Jean Grey who the team thought died it the infinity vortex had been reborn by Mephisto as his servant but broke his control over her and sacrificed herself to stop Mephisto and Strange was freed. With her death, He stayed with the team until Doom was defeated.

Strange does not appear in the game. After the SRA passes, Doctor Strange decides to not get involved and goes to a different dimension. While meditating, Doctor Strange speaks with Uatu the Watcher, who asks Strange why he doesn't use his immense power to end the conflict. Doctor Strange informs Uatu that the Sorcerer Supreme has no business in mankind's internal struggles, but promises to pray for an outcome that will benefit mankind and spill the least amount of blood.

>>>You must have aided him while in the Mandarin's Palace<<<

Conjures pixies that follow Dr. Strange and swarm any enemy that comes nearby

Mind controls enemies switching them to your team

Ability to teleport within a given range. If an ally is directly in front of you, they will teleport with you. Damages enemies at the destination following the end of the teleport

Raises health regeneration rates for the party and removes status ailments from allies within range. Costs a percent of Dr. Strange's max health

Damages enemies onscreen with a chance to change all stunned, frozen or slowed enemies into Xtreme Pips 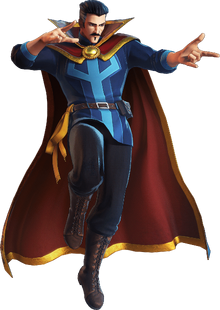 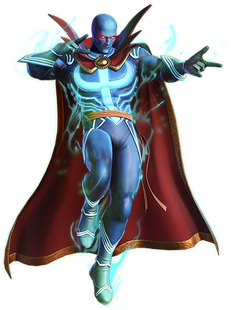 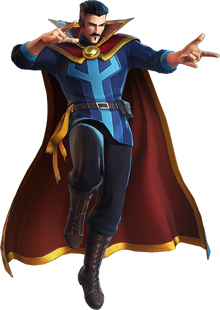 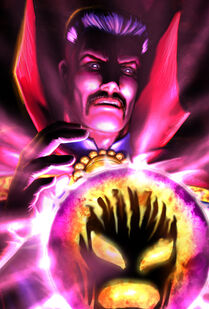 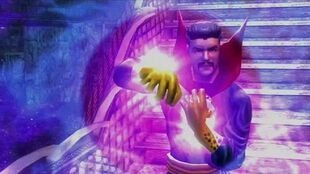