Electro is the name of two fictional supervillains appearing in American comic books published by Marvel Comics. Maxwell "Max" Dillon, the first Electro, is an enemy of Spider-Man who gained the ability to control electricity after being struck by lightning while working on a power line. Electro has since become one of Spider-Man's most enduring foes, becoming part of the collective rogue team known as the Sinister Six. The second Electro is Francine Frye.

Before the events of the 2nd game, Electro was taken to Latveria and given a new suit from the Tinkerer. He would later be defeated by Fury's Strike Team.

Max Dillon was born in Endicott, New York, the son of Jonathan and Anita Dillon on December, 13th 1967. After Maxwell graduated high school, he announced his plans to go to the university to pursue a degree in electrical engineering. When Max was 24 years old, his mother had a heart attack and died soon thereafter. Maxwell found a steady job with the electric company, but his income was limited. He was soon approached by Donald Menken, the vice president of Oscorp Industries for a job because he helped him fix his car. He finally got a job he was proud of acting as an electrical engineer and lineman for Oscorp.

One day, he was repairing a power line, a freak lightning accident caused a mutagenic change that transformed him into a living electrical capacitor. His powers were initially weak, so he spent some time stealing electrical equipment from Stark Industries to charge himself. The following days, Dillon was confronted by a small-time thug from whom he had been borrowing money to pay for the machinery he had needed. When the thug drew a gun on him because he had not paid back the money yet, he responded by shooting a blast of lightning through the thug's chest—the first time Dillon ever killed anybody. Soon taking the name "Electro", he turned to a life of a professional criminal, his first victim being J. Jonah Jameson. Electro broke into the Daily Bugle Building and stole from Jameson's safe right in front of him. Jameson accused Spider-Man of being an alternate identity of Electro, prompting Spider-Man to prove the publisher wrong. During their first-ever confrontation, Spider-Man was nearly killed after touching the electrically charged villain. Spider-Man eventually used a fire hose to short-circuit Electro while wearing rubber gloves to protect himself. He continued to fight Spider-Man for years and becoming a member of the Sinister Six.

Electro was given an upgraded suit from Lucia von Bardas, Electro used his powers to control electricity to supercharge Latveria to support the Tinkerer's research lab. When Fury led an unsanctioned attack on the country, Black Widow informed them of the benefit Electro served for the country, and they tracked him to a church where they fought. During the battle, Electro tried to recharge with various power generators, but they were destroyed and Electro was defeated. Fury and his team continued their assault on Latveria and eventually destroyed Lucia von Bardas' castle and the Tinkerer's lab.

One year later, the Latverian Army began an underground attack on New York City, and the Ultimate Alliance was deployed to stop them. It was revealed that Lucia von Bardas, now a cyborg, was leading the attack. The Alliance attacked her, and in an act of desperation, used the special suits made by the Tinkerer as bombs. For unknown reasons Electro was not among the supervillains, and later Electro was injected with nanites and was forced into the Thunderbolts for the Pro-Reg forces in the superhuman Civil War. He would be turned into a member of the Nanite Fold, become part of its second attack on Wakanda, and was eventually released with the other Nanite-based captives when the Nanite Nick Fury was defeated and the signal was shut down. 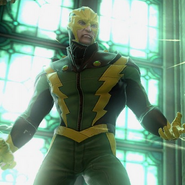