The Assassin, Black Sky, The Greek Girl, Ellie, Chick in the Spandex, and Erynys

Elektra Natchios is a ninja who has had close ties with Daredevil and previously worked as an assassin.

Elektra Natchios was born on a Greek island near the Aegean Sea on November 3rd, to Hugo Kostas Natchios and his wife Christina Natchios. She had an older brother named Orestez Natchios. When she a little girl, Christina is killed by assassins hired by Orestez, while in, she is killed by an insurrectionist during the Greek Civil War. When a nine-year-old Elektra was assaulted by kidnappers, the men were all killed by Orestez, who had grown into an accomplished martial artist after leaving home. Orestez advised his father that Elektra needed to learn self-defense. Hugo hired a sensei named Stick to teach her martial arts.

Years later, the adult Elektra has vague memories of being raped by her father as a five-year-old. Years of counseling and medication had convinced her this was a false memory, but the doubt remained. Elektra grew up close to her father but was plagued by dark visions and voices with no known source. She occasionally reacted to them with self-harm. Her father eventually sent her away to psychotherapy to become more stable. It was uncertain whether Elektra actually became more stable or merely appeared to be.

After her father was gunned down by assassins, she went to the Mountain of the Chaste to train from them but she was later dismissed by Stick for bearing too much emotion over the death of her father. Due to him dismissing her, she worked as a bounty hunter and assassin for hire. Having undertaken a contract in New York City, she crossed paths with the blind adventurer Daredevil, whom she learned to be Matt Murdock. She was sent to kill Ben Urich and came into conflict with Matt who she became close to Matt since both were trained by Stick.

Their relationship changed when Kingpin, the most powerful figure in East Coast organized crime, hired Elektra as his chief assassin replacing Lester Poindexter aka Bullseye. This started a long-standing rivalry between the two that lasted for years and he became desperate to prove himself better than her. Throughout the next six years, during her time in New York, She came across the clandestine terrorist organization known the Hand, who sent the assassins to kill her father and ran into her former rival Bullseye who brutally kills her in front of Matt. After her "death" at the hands of Bullseye, she was resurrected by Stick and becomes a member of the Ultimate Alliance as one the core members of the group.

When the U.N.N Alpha SHIELD Helicarrier was under attack by the Masters of Evil, she was one of the few heroes called on by Nick Fury for assistance. While on the carrier, she came across Bullseye once again and defeated him. Due to her actions, she became a core member of the Ultimate Alliance along with Captain America, Spider-Man, Thor, Wolverine, Storm, and Iron Man. She helped them save the world from Dr. Doom who had taken the power of Odin and stopped his Masters of Evil. After the events of MUA1, she would later go on to hunt down what remains of the Hand and to take her revenge Bullseye once and for all.

Strikes an enemy in a critical location stunning them.

A powerful sai stab that inflicts physical damage and has a chance of doing a deadly strike.

Throws a sai at a target causing major knockback. Has a chance to instant kill the target if fully charged.

Deals physical damage and stuns all enemies. If the enemy is already stunned then they will take a critical hit for a percent of their current health.

A white variation on Elektra's costume comprised of a cropped bustier, a headband, armbands, arm guards, tight leather pants, boots, and a belt.
Energy Per Kill - Regains energy with each kill
Sai Damage - Increases damage of all sai attacks

A version of Elektra's costume seemingly halfway between her Classic and Ultimate appearances. This outfit is a darker red than the Classic look and consists of a strapless bustier, two loose-fitting belts, a headband, thigh-high boots, and shoulder-length rubber gloves.
Dodge - Increases chance to dodge melee and projectile attacks
Health Per Kill - Regain health for each kill

A black variation of Elektra's Assassin costume specialized for stealth missions. The main design difference other than the color is that the Stealth costume lacks gloves but contains armbands.
Sai Damage - Increases damage of all sai attacks
Momentum - Increases momentum gain 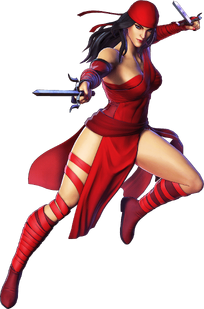 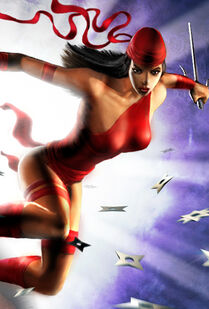 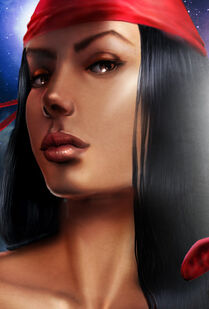