Excellent bird trainer, Skilled martial artist, and gymnast, Flight via wing harness, Empathic link with pet falcon, Limited control over birds, and Ability to see through the eyes of nearby birds

None
Falcon is a playable character in Marvel: Ultimate Alliance 3: The Black Order.

Sam Wilson was born in Harlem, New York City, to Paul Wilson, a prominent minister, and Darlene Wilson on September 23rd, 1978. Wilson has a happy childhood and finds he has a natural affinity for birds. He takes up training pigeons and has the largest pigeon coop in Harlem. His father had been killed while trying to stop a fight between two rival gangs when Sam was nine years old. Some years later, his mother, Darlene Wilson was murdered by a mugger while she tried to protect her children. Sam did his best to try and do the right thing, but his grief and anger eventually led him down a criminal path. He took on the name of "Snap" Wilson while working for the mob. He later was a member of the armed forces but retired to pursue a scientific interest. He served as "special science consultant to Nick Fury. He later developed and wore a pair of metal wings. He appeared to be an accomplished combatant, especially when using the sharp edge of the metal wings he wore as a weapon.

After an assignment, on the way to Rio de Janeiro, Sam's plane crashed on a remote Caribbean island named Exile where the Red Skull and his henchmen were hiding out. The Red Skull sought to use Wilson as a pawn to attack Captain America (who was currently on the island) with. He used the Cosmic Cube to revert 'Snap' into Sam, and give him the ability to telepathically communicate with birds, especially a bird that Wilson had bought named Redwing. After their initial skirmish, Cap was able to shake Wilson of the Skull's programming. Together, they defeated the Skull, and the Falcon became Cap's partner for a long time. 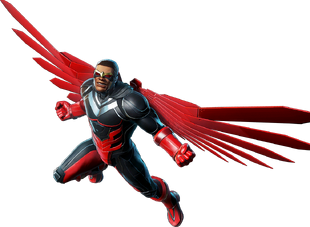 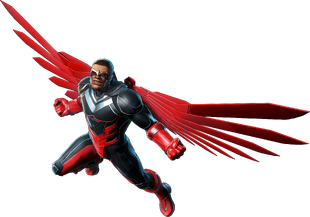