After many years as a gambler and professional thief, Remy LeBeau - also known as Gambit - fell in with the X-Men, joining them to use their superpowers to better the world. Gambit's ability to infuse objects with kinetic energy, such as his playing cards, distinguish him as a hero and as a powerful mutant. He is a member of the X-Men and had a longstanding love affair with his X-Men teammate Rogue.

Remy Etienne LeBeau was born in New Orleans, Louisiana on August, 26th. He was kidnapped from the hospital where he was born, then raised by the LeBeau Clan Thieves' Guild, and given to the Antiquary as a tribute.

They referred to the child as "Le Diable Blanc" ("the White Devil") and believed he was prophesied to unite the warring Thieves' and Assassins' Guilds. Soon after, Remy was placed in the care of Fagan's Mob, a gang of street thieves who raised the child and taught him the ways of thievery. After living as an orphan on the streets, a 10-year-old Remy attempted to pick the pocket of Jean-Luc LeBeau, then patriarch of the Thieves' Guild. Jean-Luc took the boy off the streets and adopted him into his own family.

He later became a member of the X-Men and was romantically interested in one of his teammates, Rogue, and started flirting with her. Despite her off-putting manner and the obstacle of her uncontrollable mutant ability that prevented anyone from touching her, he began romancing and seducing Rogue.

Gambit appears unconscious in a cut scene where he and a few heroes have tried to face against Dr. Doom in Doom's Castle and lost. Other heroes that appeared unconscious with him are Beast, Magneto, Professor Xavier, Colossus, Emma Frost, Cyclops, and Hulk.

While he is not playable, Moon Knight, an exclusive character in some versions, appears to have borrowed some moves off of Gambit's in the X-Men: Legends series, such as the Staff Slam, Staff Assault, and his animations (mirrored) when selected as a character.

At one point, he owed a favor to Nick Fury, which the Colonel called in when he had the mutant attack Latveria in an unsanctioned war. Gambit was put on Bravo Team, and lost contact with Fury, forcing him to send Wolverine and Spider-Man to re-establish radio communications. Bravo Team continued the attack on Castle Doom and battled the Tinkerer in his secret lab. In the end, the lab was destroyed and Gambit, as well as the other superheroes, escaped the destruction of the castle. One year after the attack, Gambit helped the Ultimate Alliance during the Superhuman Civil War and the Nanite Fold's invasion

How to unlock: Get to the 3rd map of the Latveria Mission.

Flying?: No. Has double-jump.

Circular swing knock back anyone within range. (impact damage)

Dozens of exploding cards rain down on foes. (energy damage) 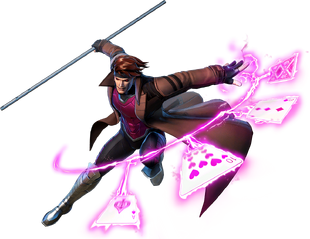 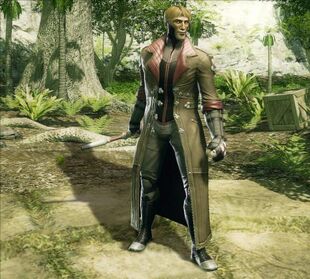 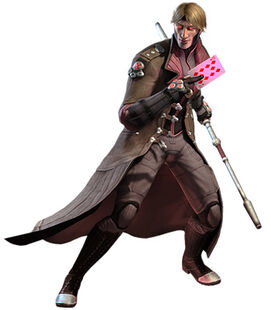 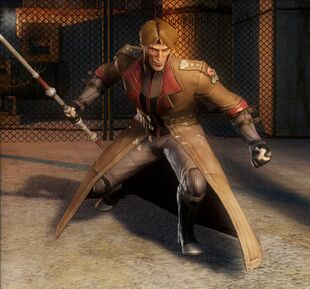 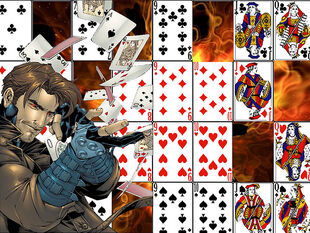