Ghost Rider is the Spirit of Vengeance, a chain wielding, motorcycle riding, vigilante from hell.

Johnny Blaze was born in Waukegan, Illinois to Barton Blaze and Naomi Kale on August, 5th. He spent his early years in the Quentin Carnival where his parents starred in a stunt show with Craig "Crash" Simpson. Johnny's mother walked out on Barton and Johnny and took the family's remaining two children, Barbara and Danny, with her. Losing his mother caused Johnny to repress many of his memories of her and his siblings. When his father died in a stunt, Johnny was adopted by Crash and Mona Simpson.

The Simpsons helped Johnny by fabricating his past with the hope that it would be less painful than the truth. Now believing that his real mother was Clara Blaze, who had died, Johnny became an enthusiastic member of the Simpson clan, growing closer to their daughter, Roxanne. The two soon became inseparable and, as they grew older, their fondness for one another moved beyond familiarity.

Blaze would eventually join the Simpsons in their own traveling stunt show, the Crash Simpson Stunt Cycle Extravaganza. Crash had become a real father figure in Blaze's eyes and on learning of Crash's life-threatening cancer, Blaze turned to the occult. His studies led him to a spell which supposedly could summon Satan himself. Johnny was unaware that he had, in fact, summoned Mephisto. Desperate to save Crash, Blaze sold his soul to Mephisto in return for Crash's cancer to be cured.

True to his word, Mephisto had ensured that Crash had not died of cancer, but instead had lost his life during the failed jump, which Mephisto quickly pointed out when he came to claim his prize. Blaze, still at the mercy of Mephisto, believed he would lose his soul until he was saved by Roxanne. Roxanne proclaimed her love for Blaze, and drove Mephisto away with the purity of her emotion. Blaze was unaware that Mephisto had bonded him with the demon Zarathos as an act of revenge for not being able to obtain Johnny's soul for himself. Johnny was transformed into a Ghost Rider, a leather-clad skeleton, his head cloaked in a sheath of flame, the night after Crash's death. While Johnny still had his soul, he was forced to punish the wicked and evil upon Mephisto's demands whenever needed.

Ghost Rider was informed about Dr. Doom and his Masters of Evil but he did not assist the Ultimate Alliance in their first couple of missions. A portal opened to what Johnny believed to be Dr. Strange's Sanctum Sanctorum but it was actually a trick caused by Mephisto to trap him in his realm. When the heroes gathered in Mephisto's realm to find the kidnapped X-Men members Nightcrawler and Jean Grey, they found Ghost Rider trapped in an Inverted Pentagram that was draining his life force. He was soon freed by Dr. Strange (or any character the player chooses) who decided to take his place in the pentagram. He then aided them in defeating Mephisto and freed Strange, but Jean sacrificed herself to save her team and defeat Mephisto. Her sacrifice inspired Ghost Rider to join the team and face off against Doom and the Masters of Evil once and for all.

>>> Must rescue him from Mephisto's Inferno <<<

Rakes chains together and breaks them into tiny pieces doing damage and causing massive knockback. There's a 100% chance of critical hit if you shoot an enemy that is airborne

Uses chains to fling an enemy into the air. Charge longer to increase the distance the enemy will soar 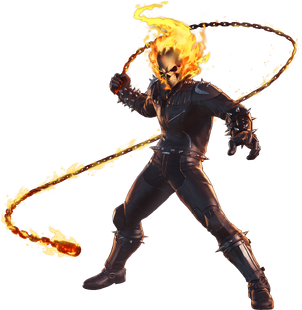 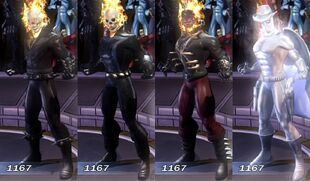 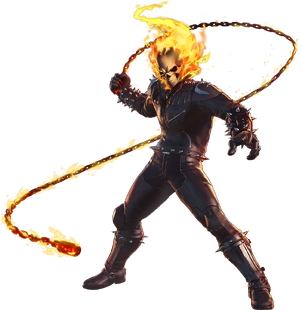 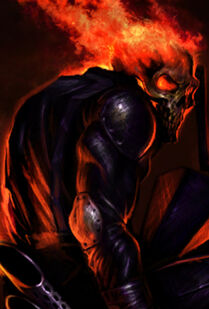