Marvel: Ultimate Alliance Wiki
Register
Don't have an account?
Sign In
Advertisement
in: Agents of SHIELD, Thunderbolts, Villains,
and 12 more

Norman Osborn was born in New Haven, Connecticut as the son of wealthy industrialist Amberson Osborn on July 14th. Amberson, a brilliant student in the fields of science, became an alcoholic after losing control of his manufacturing company and his fortune and became physically abusive toward his family. Norman quickly came to despise his father, resolving to be a better breadwinner while developing early homicidal tendencies as a means of relieving the stress of his father's abuse.

In college, where he studied chemistry, business administration, and electrical engineering, Norman meets his friends Donald Menken and Otto Octavius would later become the future Vice President of Oscorp and the supervillain Doctor Octopus. His also met his college sweetheart, eventually getting married and have a son named Harold "Harry" Osborn.

Driven mad by the same serum that gave him superhuman powers, Norman Osborn plagued New York for years until he was seemingly killed while battling with Spider-Man. He recently reappeared, murdering a string of innocents before being taken into custody. Green Goblin's genius-level intellect, range of technological devices, and general craziness make him a formidable threat to anyone he perceives as an obstacle. To torture Spider-Man, the Green Goblin kidnapped and nearly killed Gwen Stacy by throwing her off a bridge, after which Spider-Man attempted to save her with a web-line, but killed her by applying the 1100 pounds of force required to bring her to a dead stop.

Filled with rage, Spider-Man savagely attacked the Green Goblin, nearly killing him. He returned to his senses at the last minute, but the Green Goblin took the opportunity to attempt one final trick by remote controlling his goblin glider to impale the wall-crawler. Spider-Man was able to dodge the glider which instead impaled the Green Goblin, seemingly killing him. Although he appeared dead, he was mortally wounded and taken to a secret medical facility by his old friend Mendell Stromm, the man responsible for making the serum that made him the Goblin. He later returned to his life of crime and came into conflict with Spider-Man once again.

When the Civil War broke out, Green Goblin was captured by S.H.I.E.L.D. and was injected with nanites, forced to do the Pro-Registration force's bidding. When Iron Man tricked the Anti-Reg forces into coming to an isolated chemical plant, Goblin and the four other Nanite-controlled supervillains turned against the Pro-Reg forces. He and Venom blew up the plant, but Nick Fury saved the Ultimate Alliance from the blast. Later, during the Nanite siege of Wakanda, Green Goblin teamed up with both Venom & the Hobgoblin to attack the Black Panther's palace. After the fight, the Ultimate Alliance freed the three from the nanites and recruited them to the team. After the Fold was defeated, Osborn and the other two were taken into S.H.I.E.L.D. custody.

Marvel: Ultimate Alliance 2: How to Unlock/Powers

A volley of explosives. (impact damage)

Green Goblin is a boss character in a reboot game.

After gaining the Time Stone, Green Goblin raids the Raft into releasing the notorious super-villains on Earth, particularly Spider-Man's rogues. He assembles a new Sinister Six consisting Doctor Octopus (second in-command whom also fighting over the team's leadership), Mysterio, Sandman, Electro, and Venom (Eddie Brock), but the latter defect to the heroes side on Spider-Man's behalf.

After all Sinister Six members were defeated, and Eddie's betrayal because of Spider-Man's behalf, Goblin fought the heroes on the top of the Raft (mirroring a defunct MMO Marvel Heroes game tutorial stage) with a Time Stone. Despite this, Goblin was still defeated. As he uses the Time Stone at his defeat, he keep repeating his defeat multiple, causing a side-effect that allows Green Goblin to see a future of Thanos' reign supreme over every heroes and villains alike. Completely traumatized out of fear of the Mad Titan, Goblin is unable to join the Alliance and must stay imprisoned at Raft for a very much longer recovery. 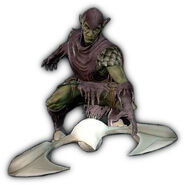