Clint Barton, the original Hawkeye is a superhero who employs technologically advanced bow and arrows to fight criminals and supervillains. He is a founding member of the Avengers (most notably Captain America’s team nicknamed Cap’s Kooky Quartet) and a former special agent of S.H.I.E.L.D. Hawkeye was originally part of PSP exclusives where he is overpowered and weak until he became part of the Heroes Pack DLC for the Xbox 360 and later the Marvel: Ultimate Alliance Gold Edition, where he got an improvement. He was originally meant to be exclusive to Wii version as well but somehow dropped for an unknown reason.

Clint Barton was born in Waverly, Iowa on September, 18th. At a young age, he lost both of his parents in a car accident. After six years in an orphanage, Clint and his brother Barney ran away to join the Carson Carnival of Traveling Wonders. Clint soon caught the eye of the Swordsman, who took the young boy on as his assistant. Along with the help of Trick Shot, the Swordsman trained Clint to become a master archer.

Clint later found the Swordsman embezzling money from the carnival. Before he could turn his mentor over to the authorities, Clint was beaten and left for dead, allowing the Swordsman to escape town. Clint's relationship with his brother Barney and Trick Shot soon deteriorated as well. He later found out that his parents were actually killed by Maggia Crimeboss, Count Nefaria who was on the run from S.H.I.E.L.D in New York City. Clint locates Nefaria and kills him avenging his family. After Nefaria's death, Clint was approached by Nick Fury and Maria Hill to become an agent of S.H.I.E.L.D.

He quickly became a high ranking agent for the organization and grew close to other Agents like, Natasha Romanoff aka The Black Widow and Bobbi Morse aka Mockingbird. They would go on many missions together and Clint eventually started a romantic relationship with Natasha. They later broke up but remained close friends with each other. He later started a relationship with Bobbi but, after a bouched mission, they ended their relationship. After they broke up, she left S.H.I.E.L.D to become combat instructor for SWORD. He along with Romanoff, became founding members of The Avengers along with Captain America, Iron Man, Thor, Hulk, Ant-Man, Wasp, War Machine, and Black Panther, including Magneto’s mutant children Scarlet Witch and Quicksilver. Mockingbird later joined the team and they rekindled their romance for one another with Hawkeye was also part of Captain America’s team dubbed Cap’s Kooky Quartet. Years later, the team would disband and Clint leaves S.H.I.E.L.D to operate his own missions with Bobbi. Some time later, Hawkeye is called back to duty to fight Dr. Doom and his Masters of Evil from taking over the universe.

Fires multiple arrows at one time if the power is charged

Fires a special arrow that hits the ground and explodes causing cold damage, freezing anyone caught in the blast radius and slowing them down for a brief period of time

This arrow will pierce any objects or enemies it hits. Any enemies hit in addition to taking damage from the arrow, will be encased in a damaging energy field

Using this will increase the damage to all attacks made

Fearing for his family, Hawkeye decided to go underground after the SRA started rounding up heroes. 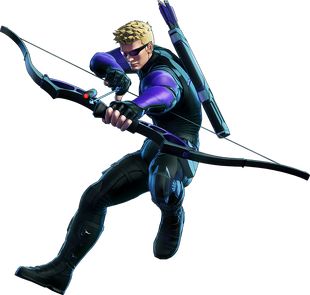 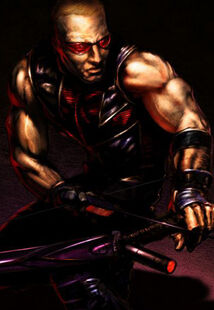 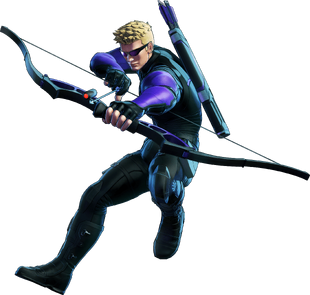