Johnny Storm was born in Glenville, New York, a Long Island suburban town, on November, 1st. Growing up, Johnny Storm lost his mother due to a car accident from which his father, surgeon Franklin Storm, escaped unharmed. Franklin Storm spiraled into alcoholism and financial ruin and was imprisoned after killing a loan shark in self-defense. Johnny Storm was then raised by his older sister, Sue Storm.

At 16, Storm joined his sister and her fiancé, Reed Richards, in a space flight in which cosmic radiation transformed those three and spacecraft pilot Ben Grimm into superpowered beings who would become the celebrated superhero team the Fantastic Four. Storm, with the ability to become a flaming human with the power of flight and the ability to project fire, dubs himself the Human Torch, in tribute to the World War II-era hero of that name. He was the teams youngest and most powerful member but he never lost control of his powers but was mostly seen as a showoff. His brass attitude would constantly come into conflict with his teammate particularly with Ben Grimm but would later apologize for his behavior. Despite his full-time as a hero he still finishes high school, attended college and met Wyatt Wingfoot would become an asset to the team and pilot.

He always saw himself as a ladies man and he really was and became romantically involved with the Inhuman Princess Crystal, Jessica Drew aka Spider-Woman and Frankie Raye aka Nova. He would later formed friendships with other heroes like Spider-Man and Iceman. He and the other Fantastic Four members would later go on to become members of the Ultimate Alliance.

Launch a continuous stream of fire toward enemies.

Create a quick blast under enemies popping them up.

Create an outward blast of flame, damaging enemies in a radius.

Create a charged fireball that starts a fire on the ground. Stuns enemies when fully charged.

Gives each member a chance of igniting enemies with melee attacks and also decreases damage taken.

Brings down meteors from the sky pummeling all nearby enemies with Fire Damage.

The appearance of the Human Torch from the now-defunct Ultimate Marvel line, in essence, a variation on a standardized Fantastic Four costume. This costume consists of a jumpsuit bearing a 4-emblem in the area of the chest, colored blue, blue-green, and blue-gray in different areas. The costume is also accompanied by a pair of blue elbow-length rubber gloves, though the padded soles of the outfit are attached to the jumpsuit, eliminating the need for a separate pair of boots.
Flaming Fist - Adds fire damage to melee attacks
Critical Strike - Increases critical strike chance

Johnny Storm's foremost superhero look during the period of his early appearances in the Silver Age, in essence, a variation on a standardized Fantastic Four costume. This costume is made up of a blue-green jumpsuit bearing a black rubber collar and a 4-emblem in the area of the chest, a waist-affixed, black leather sash, black elbow-length rubber gloves, and black boots. Although this was the first FF costume design and has been occasionally eschewed in favor of more updated ones several times over the years, the Original costume remains prevalent as the official uniform for the Fantastic Four today, proving just how pivotal it is to the core of the mythos.
Point Blank - Adds damage to any ranged attack that hits enemies within 6 feet
Boost Stats - Boosts body, focus, and strike stats

A more casual, civilian arrangement of attire, humbly compiled from a white A-shirt, khaki jeans, and a necklace. In this look, the Human Torch is partially "flamed on" at all times, as fire emanates continuously from his head and hands.
Energy Regen - Increase energy regeneration
Fire Damage - Increase fire damage

A still-retrograde but a comparatively modern interpretation of the Fantastic Four costume, worn by Johnny Storm, the Human Torch. This suit is basically a redesign of the Classic uniform, as every aspect of actual design arrangement has been kept the same, but with the blacks swapped for whites and the blue-greens swapped for navy blues.
Burning Sensation - Chance to set enemies on fire with melee attacks
Max Health - Increases maximum health 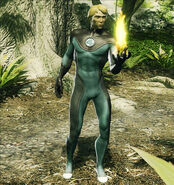