Invisible Woman (also known as Sue Storm) is a member of the Fantastic Four with her husband Reed Richards, AKA Mr. Fantastic, her brother Johnny Storm, AKA Human Torch, and friend Ben Grimm, AKA Thing.

Susan Storm-Richards was born in Glenville, Long Island on August 4th. Her parents were high paid physicians Franklin and Mary Storm. She also has a brother named Johnny who was born four years later. The parents left their kids alone one night to travel to a dinner honoring Dr. Storm. On the way, a tire blew out but only Mary was injured. Franklin escaped injury and insisted on operating on his wife. He was unable to save her and she died. After his wife's death, Dr. Franklin Storm became a gambler and a drunk, losing his medical practice, which led him to the accidental killing of a loan shark. Franklin did not defend himself in court, because he still felt guilty over Mary's death. With their father in prison, Susan had to become a mother figure for her younger brother.

While living with her aunt, Susan, at the young age of 17, met her future husband, Reed Richards, a house guest who was attending college. When she graduated from high school as the award-winning captain of her Girls' Varsity Swim Team, she moved to California to attend college, where she pursued an acting career and encountered Richards again. They began to become romantically involved with each other. Reed Richards was working in the field of aerospace engineering, was designing a spacecraft for interstellar travel. Everything was going well until the government stopped the funding of his project.

Richards, wanting to see his project through, decided to make an unscheduled test flight. Originally, it was only going to be Reed and his best friend, Ben Grimm, involved, but Susan was instrumental in persuading Reed in letting her brother and herself join them on the dangerous space mission. In space, the quartet was exposed to massive amounts of cosmic radiation. As a result, they had to abort the mission and return to Earth. After the crash landing, they realized that they gained superhuman powers; hers was the ability to become invisible at will. Realizing the potential use of their abilities, the four of them became the Fantastic Four, for the benefit of mankind. Susan adopted the code name Invisible Girl.

As the Fantastic Four, the team set up their first headquarters in the Baxter Building in Manhattan. The Fantastic Four encounter many villains in the early part of their career, like Dr. Doom, Galactus, The Skrulls, Super Skrull, Mole Man, Mr. Hyde, Kang the Conqueror, The Kree, Ronan the Accuser and The Frightful Four, but none of them contend for Susan's affections more than Namor the Sub-Mariner. Sue feels an amount of attraction to Namor, but her heart belongs with Reed,

Creates a large shield that will deflect projectile attacks.

Creates a large arc of energy that damages all enemies on screen and stuns them for 40 seconds. If the enemy is already stunned then the arc critically hits them for 50% of their life.

The appearance of the Invisible Woman from the now-defunct Ultimate Marvel line, in essence a variation on a standardized Fantastic Four costume. This costume consists of a jumpsuit bearing a 4-emblem in the area of the chest, colored blue, blue-green, and blue-gray in different areas. The padded soles of the outfit are attached to the jumpsuit, eliminating the need for a separate pair of boots, while the sleeves, which bear blue markings in the area of the lower arm, end in fingerless gloves.
Max Energy - Increases the maximum energy
Critical Strike - Increases critical strike chance

Sue Storm's foremost superhero look during the period of her early appearances in the Silver Age, in essence a variation on a standardized Fantastic Four costume. This costume is made up of a blue-green jumpsuit bearing a black rubber collar and a 4-emblem in the area of the chest, a waist-affixed, black leather sash, black elbow-length rubber gloves, and black boots. Although this was the first FF costume design and has been occasionally eschewed in favor of more updated ones several times over the years, the Original costume remains prevalent as the official uniform for the Fantastic Four today, proving just how pivotal it is to the core of the mythos.
Concussive Mastery -Increase damage of all concussive force attacks
Unstoppable Force - Reflects damage back on melee attackers

A modern interpretation of the FF costume, mostly derived in terms of design and coloration from the Classic incarnation. This uniform consists of a blue jumpsuit bearing a large, white-encircled 4-emblem in the area of the left part of the breast, white elbow-length rubber gloves, and white boots.
Concussive Mastery - Increase damage of all concussive force attacks
Protective Force - Increases all resistances

A still-retrograde but comparatively modern interpretation of the Fantastic Four costume, worn by Sue Storm, the Invisible Woman. This suit is basically a redesign of the Original uniform, as every aspect of actual design arrangement has been kept the same, but with the blacks swapped for whites and the blue-greens swapped for navy blues.
Elusiveness - Increases chance to dodge attacks
Boost Stats - Boosts body, focus and strike

Susan started out on the Pro-side but then after feeling distant from Reed due to a meaningless war, she joins Caps team of Secret Avengers joining her brother Johnny Storm. 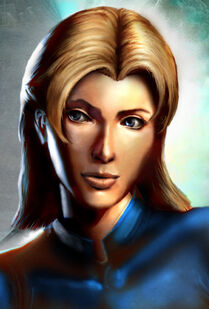 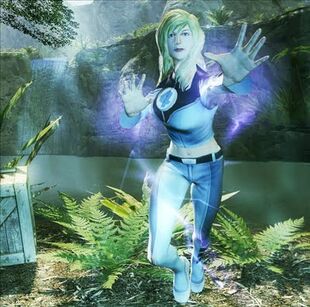 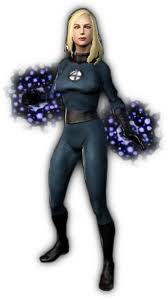