Tony Stark was born on May 2nd, in Long Island, New York is the son of a wealthy industrialist and head of Stark Industries, Howard Stark, and Maria Stark. A boy genius, he enters MIT at the age of 15 to study engineering and later receives master's degrees in engineering and physics. After his parents are killed in a car accident, he inherits his father's company.

Years later, Stark is critically injured by a booby trap and captured by the terrorist group known as the Jade Dragons aka the Ten Rings, led by Wong-Chu. Wong-Chu orders Stark to build weapons, but Stark's injuries are dire and shrapnel is moving towards his heart. His fellow prisoner, Ho Yinsen, a Nobel Prize-winning physicist whose work Stark had greatly admired during college, constructs a magnetic chest plate to keep the shrapnel from reaching Stark's heart. In secret, Stark and Yinsen use the workshop to design and construct a suit of powered armor, which Stark uses to escape. During the escape attempt, Yinsen sacrifices his life to save Stark's by distracting the enemy as Stark recharges. Stark takes revenge on his kidnappers and returns to the U.S, with the help of his childhood friend and Air Force Captain, James "Rhodey" Rhodes.

Back home, Stark discovers that the shrapnel fragment lodged in his chest cannot be removed without killing him, and he is forced to wear a miniature electromagnet beneath his clothes to act as a regulator for his heart. He must recharge the magnet every day or else risk the shrapnel killing him. The cover story that Stark tells the news media and the general public is that Iron Man is his robotic personal bodyguard, and corporate mascot. As he continued to operate as Iron Man he built more suits for every scenario and eventually gave Rhodey a suit and became the hero known as "War Machine". The duo became a force to be reckoned with, and along the way, he made some powerful enemies including The Mandarin, Fin Fang Foom, Iron Monger, Crimson Dynamo, Whiplash, Madame Masque, Blizzard, MODOK, Ghost, and Spymaster.

He later also develops a serious dependency on alcohol due to the number of enemies he gained over the last few years, but later overcame this blight and became the leader of the super-hero team known as the Avengers not long after. Although he leads the team, Tony believes that his time with the demon in the bottle would impair his judgment so he decided to hand over the role of leader to Steve Rogers aka Captain America. He fought new enemies, gained new allies, built new suits, overcame his personal problems, and became a true hero once again. He and Rhodes stayed on the team for a number of years, but the team went their separate ways. Tony continued to operate as Iron Man and made new suits with the help of his new engineering team. He later became one of the core members of the Ultimate Alliance alongside Captain America, Thor, Spider-Man, Elektra, Storm, and Wolverine.

A few years after the Avengers disbanded, Stark Industries and S.H.I.E.L.D. had a falling out with Stark, for personal reasons, stopping the development of weapons for the organization. Unable to cope with this, S.H.I.E.L.D. filed lawsuits against Stark for contract breaching, while secretly tampering with his tax contributions, making him lose more money than expected in the process. Eventually, Stark won the case.

One year later, Dr. Doom attacks to the S.H.I.E.L.D. Helicarrier UNN Alpha, Nick Fury felt the need of finding a new headquarters for the large team of heroes that was assembled for the occasion, since the Helicarrier sustained too much damage to serve as a base. In spite of their differences, Tony offered Stark Tower, since it had plenty of facilities to supply the team's needs. He was also responsible for bringing in his former teammates, Hank Pym and Vision for technical support, as well as Wyatt Wingfoot to serve as the team's pilot. All through the journey against Doom, Iron Man fought many of his old foes, like Crimson Dynamo, M.O.D.O.K., and Mandarin.

When Iron Man was off-world with the other heroes, Doom finally acquired the powers of Odin and started laying waste to the world's heroes and began corrupting them and making them into his personal soldiers. When he returned to earth, Doom took control of Stark Tower and upon arriving back at the Tower, Tony and the team finds that Doom has converted it into "Doomstark" tower. They fend off an army of Iron Man-based robots so that they can reactivate the tower for their use. After Doom's defeat, he regained control of the tower and continued his operations as Iron Man

Two years after Doom's defeat, Iron Man joined Nick Fury's Secret War on Latveria. A year after that Latveria retaliated and attacked New York. The attack was stopped and as Iron Man and Captain America were busy clearing up the in the aftermath, Nick Fury appeared and explained that the attack was his fault and that he was going into hiding. In a fit of rage, Iron Man blasted Fury who turned out to be a life model decoy. After the Stamford incident, Stark became the leader of the Superhuman Registration movement and battled Captain America's Anti-Registration movement. He had Reed Richards aka Mr. Fantastic as his second in command and Melissa Gold aka Songbird as his lead enforcer. Tony also wanted to enlist other heroes into registering like Yellowjacket, Black Widow, and War Machine. He also helped to create new nanites with Richards that controlled supervillains.

Iron Man fakes a hostage situation at a chemical plant owned by Stark Industries. There, he attempts to negotiate with Captain America, promising amnesty. Captain America refuses thanks to a trick and a battle ensues between the two factions. As the two fought, The nanite-controlled Bullseye, Green Goblin, Lady Deathstrike, and Venom go haywire and attack the agents they were programmed to help, stealing explosives to destroy the facility.

The plant was destroyed and several heroes and S.H.I.E.L.D personnel were injured. After this Iron Man alway the anti-reg heroes temporary amnesty in order to stop the nanite-controlled villains. The heroes were successful in defeating the Fold and a Nanite Controlled Nick Fury from taking of the world and the citizens begin trusting the heroes again but Tony and Steve had their own issues to resolve. Eventually, the Registration Act was repealed and they became friends once again and helped rebuild the Ultimate Alliance.

A single projectile with an explosion radius

Rapidly fire off a stream of lasers, which repeatedly bounce off walls at higher levels

In the second game, Tony Stark is the leader of the pro-registration forces trying to force all superheroes into registering with the U.S. Government and S.H.I.E.L.D..

How to Unlock: Dependent on pro-registration.

Allows for more frequent use of powers. 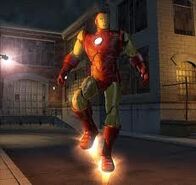 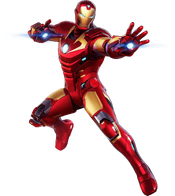