Empathy; Telepathy; Telekinesis; Phoenix Force which allows her to do Cosmic Pyrokinesis, Teleportation, Resurrection and Immortality

Jean Grey is a playable character in Marvel: Ultimate Alliance 2 and is a member of the X-Men. In Mephisto's realm, if the player chooses to save Nightcrawler instead of Jean, she will return as the Dark Phoenix. Which starts the events of the Dark Phoenix Saga. For some reason, Jean Grey somehow return to the good side, X-Men remain active due to Nightcrawler being active, indicating retcon Jean and Nightcrawler's fates by player's choice in the first game. However it is likely that Nightcrawler is the 'canon' as in the post game it is stated that Jean returned as Dark Phoenix, but somehow regained her senses afterward.

As of Marvel: Ultimate Alliance 3, she simply listed as Phoenix, as well as being a boss character under the alias Dark Phoenix. Jean is the titular main character of the third game's second DLC's storyline.

Jean Grey was born on October, 10th. She is the second daughter of John and Elaine Grey. She had an older sister, Sara Grey-Bailey. John Grey was a professor at Bard College in upstate New York. Growing up, Jean's childhood and her relations with her family have shown a stable, loving family life. Jean's mutant powers of telepathy and telekinesis first manifest when her best friend is hit by a car and killed. Jean mentally links with her friend and nearly dies as well. The event leaves her comatose, and she is brought back to consciousness when her parents seek the help of powerful mutant telepath,

Charles Xavier blocks her telepathy until she is old enough to be able to control it, leaving her with access only to her telekinetic powers. Xavier later recruits her as a teenager to be part of his X-Men team as "Marvel Girl", the team's sole female member. After several missions with the X-Men, Xavier removes Jean's mental blocks and she is able to use and control her telepathic powers. She begins a relationship with teammate Cyclops, which persists as her main romantic relationship, though she also develops a mutual secret attraction to later addition to the team, Wolverine.

During an emergency mission in space, the X-Men find their shuttle damaged. Jean pilots the shuttle back to Earth but is exposed to fatal levels of radiation. Dying, but determined to save Cyclops and her friends, Jean calls out for help and is answered by the cosmic entity, the Phoenix Force. The Phoenix Force, the sum of all life in the universe, is moved by Jean's dedication and love and takes the form of a duplicate body to house Jean's psyche. In that instant, the Phoenix Force is overwhelmed and believes itself to be Jean Grey and places Jean's dying body in a healing cocoon. This cocoon is later described as a Phoenix Egg. The ship crashes in Jamaica Bay, with the other X-Men unharmed.

The Phoenix Force, as Jean Grey, emerges in a new green and gold costume and adopts the new codename "Phoenix", with immense cosmic powers. Meanwhile, the cocoon containing the real Jean Grey sinks to the bottom of the bay, unnoticed. Phoenix continues her life as Jean Grey with the other X-Men, joining them on missions and saving the universe. During "The Dark Phoenix Saga", Phoenix becomes overwhelmed and corrupted by her first taste of evil and transforms into a force of total destruction, called "Dark Phoenix", inadvertently killing the inhabitants of a planetary system, after consuming its star, and jeopardizing the entire universe. However, Jean's personality manages to take control and Phoenix commits suicide to ensure the universe's safety.

Jean Grey appeared as an NPC (non-playable-character) and a mini-boss in Murderworld under the control of Arcade. She then was taken hostage by some of Mephisto's minions along with Nightcrawler. They are put in separate cages but you can only choose one to survive. The one you didn't choose will end up as a boss, then he/she will regain their memory, but then end up sacrificing themselves to buy time for the team to escape.

However, in a patch version of PC (might also be for other console versions), in countesy of Dark_Mark of www.marvelmods.com, both Jean and Nightcrawler can be saved by a telekinetic user (mainly Magneto for now). As the team is having a hard time against Mephisto, she arrives with Nightcrawler, telling the team a boundary of Mephisto's will comes from his realm and only a hero whose power is beyond godlike or devilish levels, which is Jean's Phoenix Force, can stop him. Jean takes care of the final blow on Mephisto, thus managing to safely escape the realm with Nightcrawler and the team. Despite having been saved along with Nightcrawler, Jean is absent during a raid against Dr. Doom with the power of Odin, presumably training to access the true potential of the Phoenix Force somewhere. Jean is presumably unaware that her friends, including her lover, Cyclops (future-self, when the present Cyclops, along with Colossus, Magneto, Hulk and Nightcrawler, including Dr. Doom are playable and reside with the other heroes who were about to depart from Attilan back to Earth) are defeated and most of them corrupted, until the surviving heroes arrive, save Odin and defeat Doom's future-self with a sacrifice of his present self. She's finally completed her training many days later during a world restoration that had been caused by Doom's future-self.

There are many mods and costumes for Jean in www.marvelmods.com

Marvel:Ultimate Alliance 2: How to Unlock

Remember the scene at the end of X-Men 3: Last Stand where Jean Grey (as Phoenix) incinerates an entire army? That is what you'll think of Jean when you first unlock her – able to blast through whole armies single-handedly. The euphoria doesn't last; as the game progresses, Jean's weaknesses begin to shine through. For one, she doesn't have a single-target attack that works well against the strong minions and mini-bosses. All her best attacks are area-of-effect blasts. Also, she can't take much punishment and will eat Health Tokens.

Despite those problems, you may have a hard time giving her up. Her Pyrokine Blast has great range and affects enemies in a wide arc in front of her (~100-120°), and knocks them back. That same power can blow up huge numbers of health containers, providing a fairly constant stream of red orbs to your party. Add that PkB is a quick-firing blast and you have a real winner. Build up Pyrokine Blast (all her other Powers are really rather weak) and Abilities that boost Focus and Powers/fire damage.

Add in her ability to self-resurrect (which doesn't count as a "revival" for those awards) and her high Teamwork score – making her an excellent partner for any kind of Fusion – and Jean is a nearly indispensable hero on your team.

For more control, hold (button) and aim with the left stick.

Stuns foes with a mental blast

A Greatly increased area of effect.

Chance to auto-revive with a buff.

Jean rejoined the game's roster as part of the second wave of paid DLC. Now simply goes by her well-known codename Phoenix.

As a playable character, Jean sports massive amounts of energy and power, being one of the best damage dealers in the game. However, there is a drastic downside to playing as her as well, as she also has some of the worst defensive stats in the entire game. However, she is resistant to fire attacks, and has an extreme attack the revives all her allies. In addition to this, she can auto revive on occasion. Unlike in other installments where she uses telepathy, telekinesis combined Phoenix Force’s cosmic pyrokinesis, she appears to be mainly using her cosmic pyrokinesis for all of her attacks. 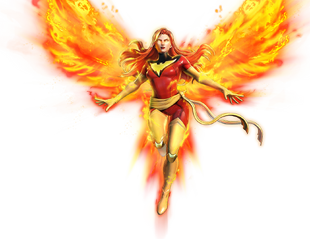 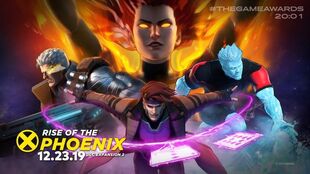 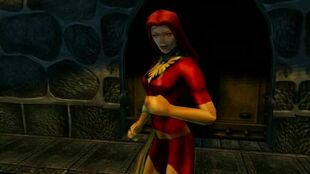 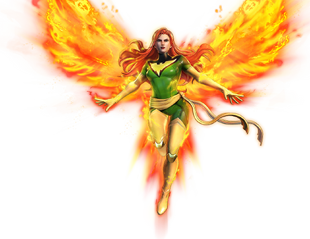 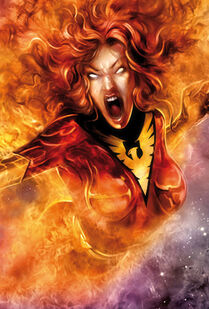 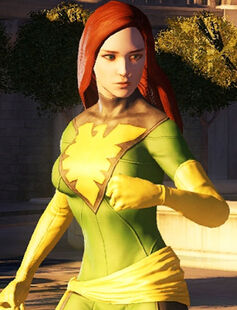 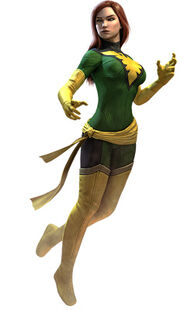 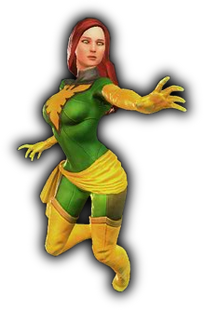 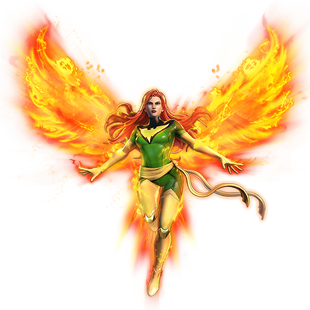