She also appears in Marvel: Ultimate Alliance 2 as one of the villains infused with the control-nanites created by Mister Fantastic that eventually develop into the Fold.

Yuriko Oyama was born in Osaka, Japan. Her father was Lord Dark Wind (Kenji Oyama), a Japanese crime lord and criminal scientist who created the process by which adamantium can be bonded to be the one. Kenji was a former Japanese kamikaze pilot during World War II. His face was horribly scarred in a failed suicide attack on an American battleship. Feeling ashamed by his failure decades earlier, he scarred the faces of Yuriko and her two brothers in a ritual design. Her two brothers would later die while in their father's service. Distraught, Yuriko belatedly embraced her father's ideals and sought to track down whoever dishonored him and restore Japan's honor. She adopted a costumed identity, as a samurai warrior. She attempted to find Bullseye with an adamantium tracking device, intending to get revenge on him for betraying her father and retrieve the adamantium in his bones for study. Instead, the device led to Wolverine, whose skeleton had also been bonded with adamantium. Deathstrike sought to kill him to right the wrong of the theft of her father's theories and to restore her family's honor; however, she and her followers were defeated by Wolverine and Vindicator of Alpha Flight. She then went to the Mojoverse and sought Spiral's "body shop" where she received extensive cybernetic enhancements including adamantium bones and talons. As a cyborg, she became a professional criminal, and joined forces with former Hellfire Club mercenaries-turned-cyborgs Cole, Macon, and Reese. The four cyborgs stalked Wolverine and Katie Power in New York 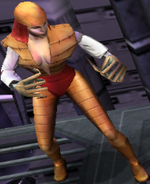