Marvel: Ultimate Alliance Wiki
Register
Don't have an account?
Sign In
Advertisement
in: Villains, Bosses, Masters of Evil,
and 8 more

Curtis Connors was born in Coral Gables, Florida on November, 6th 1963. He was a gifted surgeon who enlisted in the U.S. Army. He performed emergency battlefield surgery on wounded GIs. However, his right arm was terribly injured in a wartime blast, resulting in its amputation. After his return to civilian life as a research technologist, Connors became obsessed with uncovering the secrets of reptilian limb regeneration. Working from his home in the Florida Everglades with the help of war buddy Ted Sallis, he finally developed an experimental serum taken from reptilian DNA.

The serum successfully regrew the missing limb of a rabbit, so then Connors chose to test the serum on himself. He ingested the formula and his missing arm did indeed grow back. However, the formula had a side effect. Connors was subsequently transformed into a reptilian humanoid monster. Spider-Man discovered this situation during a trip to Florida to investigate newspaper reports of the Lizard after his employer the Daily Bugle challenged him.

After discovering the Lizard's true identity and origin, Spider-Man used Connors' notes to create an antidote to restore him to his human form and mentality. Another attempt to develop this serum for safe use again resulted in Connors transforming into the Lizard, but on this occasion he was saved thanks to his former colleague Professor Charles Xavier and his first team of X-Men, Beast and Angel tracking the Lizard down in the swamps so that Iceman could send him into hibernation long enough to develop a cure. 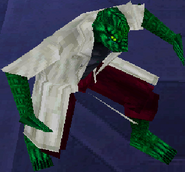