Carl Lucas was born and raised in Harlem, New York on August, 26th 1976. He spent most of his youth in a gang called the Rivals with his friend Willis Stryker, who also turns out to be his stepbrother fights the rival gang the Diablos and commits petty crimes, often on the behalf of deformed mobster Sonny "Hammer" Caputo. In and out of juvenile homes throughout his teens, Lucas dreams of becoming a major New York racketeer until he finally realizes how his actions are hurting his family. He seeks to better himself as an adult by finding legitimate employment.

Meanwhile, Stryker rises through the ranks of crime, but the two men remain friends. When Stryker's activities anger the Maggia crime syndicate, he is badly beaten in a mob hit, saved only by Lucas's intervention. When Stryker's girlfriend, Reva Connors, breaks up with him in fear of his violent work, she seeks solace with Lucas. Stryker is convinced that Lucas is responsible for the breakup, so he plants heroin in Lucas's apartment and tips off the police. Lucas is arrested and sent to prison where contact with his family is sparse due to the resentment of his brother James Jr., who intercepts Lucas's letters to their father James and eventually leads each to believe the other is dead.

Lucas is consumed by rage over Stryker's betrayal and his father's supposed death, engaging in frequent brawls and escape attempts. Eventually transferred to Seagate Prison off the coast of Georgia, he becomes the favorite target of racist corrections officer Albert "Billy Bob" Rackham, whose sadistic brutality ultimately leads to a demotion that he blames on Lucas. Research scientist Dr. Noah Burstein recruits Lucas as a volunteer for a cellular regeneration experiment based on a variant of the Super-Soldier process he had previously used to empower Warhawk. Burstein immerses Lucas in an electrical field conducted by an organic chemical compound; then he leaves Lucas unattended, Rackham alters the experiment's controls, hoping to maim or kill Lucas. Lucas' treatment is accelerated past its intended limits, inducing body-wide enhancements that give him superhuman strength and durability. He uses his new power to escape Seagate and makes his way back to New York, where a chance encounter with criminals inspires him to use his new powers for profit.

Adopting the alias Luke Cage and donning a distinctive costume, he launches a career as a Hero for Hire, helping anyone who can meet his price. He soon establishes an office above Times Square's Gem Theater, where he befriends film student D. W. Griffith. Burstein, aware of his friend's innocence, also relocates to New York and opens a medical clinic, assisted by Dr. Claire Temple, whom Cage begins dating. Although Cage is content to battle strictly conventional criminals, he soon learns that New York is hardly the place to do so. Stryker himself has become a Maggia agent known as Diamondback and dies battling Cage. Through the years not only has he encountered Diamondback but also fought other superpowered criminals and villains like Cottonmouth, Bushmaster, Shades, Black Mariah, Comanche, Nightshade and Tombstone. He made allies that would become members of his heroes for hire like Iron Fist, who he later becomes his best friend and closest ally, Former Harlem Detective, Misty Knight, and martial artist/swordswoman Colleen Wing. He later becomes a member of the Ultimate Alliance but some of the Heroes for Hire were not seen assisting him alongside the some of his new allies.

When Doctor Doom and his Masters of Evil attempted to steal Odin's powers to rule the world, Luke Cage joined the Ultimate Alliance and helped to bring down Doctor Doom's armies and stop his plans.

Two years later, Luke Cage joined his fellow heroes on an unsanctioned attack on Latveria led by Nick Fury. Luke donned a new costume that was black and yellow in color. He was a member of Bravo Squad. Sometime later, Tony Stark would try to hire Luke Cage as a Security Officer at Stark Industries.

In the wake of the Civil War, Luke Cage joined Captain America's resistance movement and served as Cap's second-in-command, He is one of the six characters whos faction allegiance cannot be changed and helped organize multiple attacks on Pro-Registration targets such as the Prison Convoy and Negative Zone prison. When the Fold started to take control of the world, Cage stayed with the Ultimate Alliance to battle the new foe, eventually defeating it.

Grab nearby victims swinging them around and throwing them on release

Causes all nearby enemies to attack Luke for the duration of the boost. Reduces damage taken and reflects all projectiles back at the attackers

Raises max health and striking stats for a time

Leap into the air and slam into the ground causing massive physical damage. Also, increases SHIELD credit drops for enemies defeated during an attack sequence

An outfit consisting of a leather jacket with a red T-shirt underneath, blue denim jeans, silver wristbands and ankle-bands, black sunglasses, a silver belt, and a necklace.
Max Health - Increases maximum health
Power Damage - Increases the damage from powers 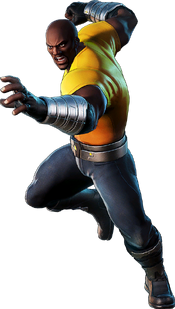 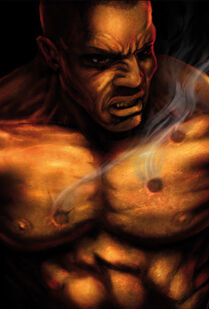 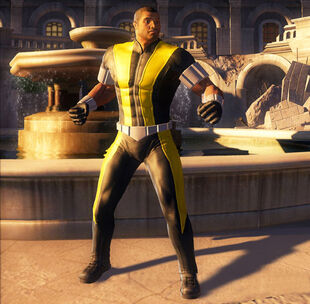 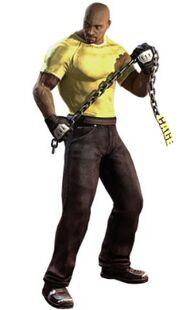 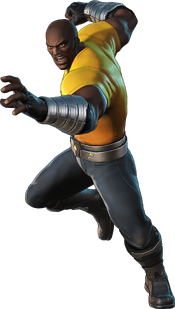