Max Eisenhardt was born to middle-class German-Jewish family on July 12th. Max's father, Jakob Eisenhardt, was a decorated World War I veteran. Surviving discrimination and hardship during the Nazi rise to power, the passing of the Nuremberg Laws in 1941, and Kristallnacht, Max and his family fled to Poland where they were captured during the German invasion of Poland and sent to the Warsaw Ghetto. Max and his family escaped the ghetto, only to be betrayed and captured again. His mother, father, and sister were executed and buried in a mass grave, but Max survived, possibly due to the manifestation of his mutant powers. Escaping from the mass grave, he has ultimately captured yet again and sent to Auschwitz, where he eventually became a Sonderkommando. While at Auschwitz, Eisenhardt reunited with a Romani girl named Magda, whom he had fallen in love with when he was younger, and with whom he would escape the concentration camp during the October 7th, 1944 revolt.

Years later, he worked in a factory as an ironworker and went by a new name Erik Lensherr and had a child with Magda in Hafia, Isreal named Anya, who he nearly killed during an attack at his house. Sometime later, he met and became friends with Charles Xavier and the two founded the first generation of X-Men. He along with Charles, Hank Mccoy aka Beast, Raven Darkholme aka Mystique, Armando Munoz aka Darwin, Sean Cassidy aka Banshee and Angel Salvatore aka Tempest went on many missions together for the next ten years but as the time went on he became frustrated with Charles' pacifistic nature towards the humans and wanted to take a more violent approach.

After a battle with the High Evolutionary, He, Mystique, Tempest a former mercenary named Sabretooth and young mutant named Astra, form a team of their own. Years later, Magneto reemerged in costume and helmet, designed to shield him from telepathy, determined to conquer the human race, to prevent their oppression of mutants, as the self-proclaimed savior of mutant kind. Magneto had also created an orbital space station, Asteroid M, to use as a base and began to assemble his original Brotherhood of Evil Mutants.

Magneto charges up and unleashes an explosion damaging all nearby enemies

Magneto causes a magnetic storm and summons pieces of metal that rain down on enemies. Increases the damage from other Xtremes as well

Although he remains NPC in n-space versions, Magneto is both playable and boss DLC characters in the primary Vicarious Visions version. He is the boss in the DLC simulator Overload.

If combining between both Vicarious Visions and n-space versions into one, Magneto is revealed to be one of the superhuman victims of The Fold alongside his son Quicksilver. Once they are saved by the heroes, Magneto will join the heroes to fight The Fold for Earth's freedom, while Quicksilver returns to Wakanda to guard the country as quick as possible until the Fold is destroyed. 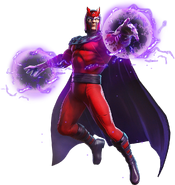 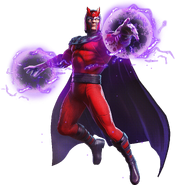 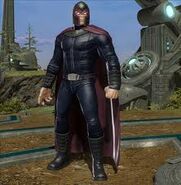 When the Infinity Stones accidentally scattered by Star-Lord across the Earth and fell into the hands of some villains, with one happens to be Dormammu's Dark Dimension, the Power Stone temporarily fell into the hands of the Brotherhood's associate, Hellfire Club, until the X-Men Nightcrawler and Psylocke manage to steal it back to give it to their allies at Ultimate Alliance, who happens to be defending X-Mansion guarded by Cyclops and Colossus from the assault Ultron's hacked Sentinels, just to lure the heroes into hand over the stones they collected to him. Magneto and his Brotherhood members Mystique and Juggernaut are dispatched by Hellfire Club to steal the Power Stone back to them while destroying Ultron's last Sentinels, until the arrival of Thanos' Black Order finally halt the Brotherhood to have a temporary truce with the heroes due to Thanos' threat may endangered mutants as well. Magneto joins the alliance's journey to stop Thanos