Reed Richards was born in Central City, California on December 16th, Reed is the son of Evelyn and Nathaniel Richards. Nathaniel was a scientific genius, and Reed inherited a similar level of intellect and interests. A child prodigy with special aptitude in mathematics, physics, and mechanics, Reed Richards was taking college-level courses when he was 14. He attended such prestigious universities as the Massachusetts Institute of Technology, California Institute of Technology, Harvard University, Columbia University, and the fictional Empire State University.

By the age of 20, he had several degrees in the sciences under his belt. It was at Empire State University that he met Benjamin J. Grimm. Reed had already begun designing a starship capable of traveling in hyperspace. Sharing his plans with his new roommate, Grimm jokingly volunteered to pilot the craft. Also while at State U, he met a brilliant fellow student, Victor Von Doom. In Richards, Doom met the first person who could match him intellectually; regarding Richards as his ultimate rival, Doom became increasingly jealous of Richards. Determined to prove he was better, Doom conducted reckless experiments which eventually scarred his face and would lead him to become Doctor Doom.

During the summer months, Reed rented a room in a boarding house owned by the aunt of a young woman named Susan Storm, who was an undergraduate student at the time. Reed fell in love with Sue instantly and began courting her. Ultimately, Reed was too distracted from his work on his dissertation due to his romance with Sue and decided that the best thing for both of them was to move out of Marygay's home.

Moving on to Harvard, Reed earned Ph.D.s in Physics and Electrical Engineering while working as a military scientist, all this by the age of 22. He also worked in communications for the Army. Three years later, in his mid-20s, Reed used his inheritance, along with government funding, to finance his research. Determined to go to Mars and beyond, Richards based the fateful project in Central City. Susan Storm moved into the area, and within a short time, found herself engaged to Reed.

Reed's old college roommate, Ben Grimm, now a successful test pilot and astronaut, was indeed slated to pilot the craft. It was on Reed's initiative that the fateful mission which had Susan Storm, Johnny Storm and Ben Grimm accompanying him into space took place. When their ship passed through the Van Allen belt they found their cockpit bombarded with nearly lethal doses of cosmic radiation. Reed had neglected to account for the abnormal radiation levels in the belt's atmosphere. The cosmic rays wreaked havoc on the starship's insufficient shielding and they were forced to return to Earth immediately. When they crash-landed they found that their bodies were changed dramatically. Reed's body was elastic and he could reshape any portion of his body at will. At his suggestion, they decided to use their new abilities to serve mankind as the Fantastic Four. Reed was chosen to lead the group, under the name Mr. Fantastic.

Slams fists into a nearby victim. If a victim is stunned does 50% extra damage

Swing arms in a huge arc. If fully-charged knocks down targets

Roll into a ball and bounce around. Damage is based on contact speed. Executing any other power exits pinball mode

Size up Mr. Fantastic's fists and do extra melee damage for a time along with his chance for critical hits

Temporarily increase the elasticity of Mr. Fantastic's skin giving him the ability to deflect nearly all projectile and beam attacks

Call in an air strike on nearby enemies. Increases damage done by other attacks in sequence and greatly increases XP earned as well

The appearance of Mr. Fantastic from the now-defunct Ultimate Marvel line, in essence, a variation on a standardized Fantastic Four costume. This costume consists of a jumpsuit bearing a 4-emblem in the area of the chest, colored blue, blue-green, and blue-gray in different areas. The costume is also accompanied by a pair of blue elbow-length rubber gloves, though the padded soles of the outfit are attached to the jumpsuit, eliminating the need for a separate pair of boots.
Power Damage - Increases the damage from powers

Reed Richards's foremost superhero look during the period of his early appearances in the Silver Age, in essence, a variation on a standardized Fantastic Four costume. This costume is made up of a blue-green jumpsuit bearing a black rubber collar and a 4-emblem in the area of the chest, a waist-affixed, black leather sash, black elbow-length rubber gloves, and black boots. Although this was the first FF costume design and has been occasionally eschewed in favor of more updated ones several times over the years, the Original costume remains prevalent as the official uniform for the Fantastic Four today, proving just how pivotal it is to the core of the mythos.
Melee Damage - Increase melee damage
Max Health - Increases maximum health

A modern interpretation of the FF costume mostly derived in terms of design and coloration from the Classic incarnation. This uniform consists of a blue jumpsuit bearing a white-encircled 4-emblem in the area of the chest, white elbow-length rubber gloves, and white boots.
Combo Bonus XP - gives bonus XP for combos
Power Damage - Increases the damage from powers

A still-retrograde but a comparatively modern interpretation of the Fantastic Four costume, worn by Reed Richards, A.K.A. Mister Fantastic. This suit is basically a redesign of the Classic uniform, as every aspect of actual design arrangement has been kept the same, but with the blacks swapped for whites and the blue-greens swapped for navy blues.
Reflect Damage - Reflects some melee damage back on the attacker
Focus - Increases focus

Mr. Fantastic works for the pro-registration forces in Marvel: Ultimate Alliance 2. He is one of six characters whose faction is immutable. 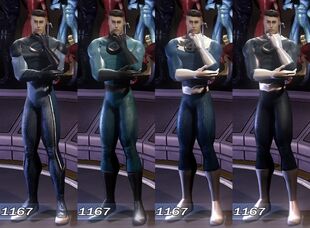 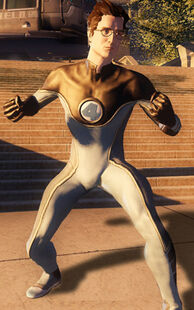 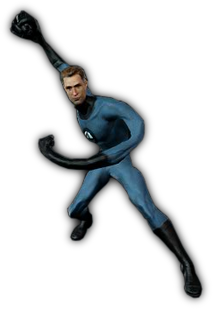 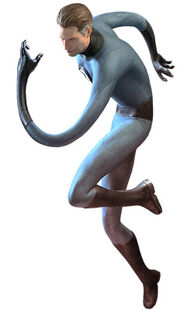 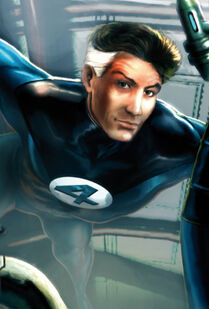