Kamala Khan was born in Jersey City, New Jersey on August, 14th. Her parents and her older brother, Aamir Khan moved to the United States from Karachi, Pakistan. In kindergarten, Kamala met Nakia Bahadir, who went on to become Kamala's best friend. Like Kamala, Nakia was a practicing Muslim and the daughter of immigrants. Later, when Kamala was entering the second grade, the Khan family met one of her new classmates, Bruno Carrelli. The teacher, Ms. Bartholomew, told the Khans that Bruno's mother had recently lost custody of Bruno and his younger brother Vick. The Carrelli brothers had been sent to live with their grandparents, immigrants from Italy, and their family had been struggling to make ends meet. They had not been able to pay for Bruno's activities, and young Bruno had become something of a pariah.  Kamala found solace with her two best friends, Bruno and Nakia, something she sorely needed. Though proud and respectful of her heritage and faith, Kamala always felt different and was often mocked by her other peers for her nerdy interests and strict parents. In addition to her friendship with Nakia and Bruno, Kamala found escape in her love of video games, social media, fan fiction, and above all, superheroes. She devotedly followed the career of Carol Danvers, the former Ms. Marvel who had recently started going by the nom de guerre Captain Marvel. One night, hoping to prove herself to be more than the odd duck, Kamala went against her parents' wishes -- and Bruno's -- to go to a party at the Jersey Waterfront; however, her classmates, particularly Zoe Zimmer and Zoe's boyfriend Josh Richardson, kept teasing and ostracizing her. Miserable, Kamala was on her way home when Jersey City was suddenly blanketed in the Terrigen Mists, and Kamala along with it. Unconscious in her Terrigen cocoon, Kamala saw an unusual vision of three of her favorite super heroes -- Captain America, Iron Man, and, of course, Captain Marvel. The heroes scolded the girl for her disobedience and asked her what she wanted in life. Kamala mused that she wanted to be more like Captain Marvel, who she described as "beautiful and awesome and butt-kicking and less complicated." When the vision ended and Kamala emerged from her Terrigenesis, she was shocked to find that she had literally been transformed into a younger Carol Danvers in her Ms. Marvel costume. 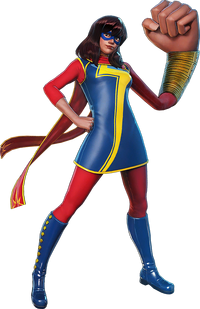 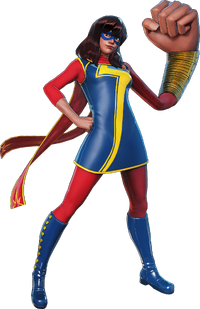