Nick Fury Jr. is a current leader of S.H.I.E.L.D. and a central NPC who debuted in Marvel: Ultimate Alliance 3, replacing his father, Nick Fury Sr.. Unlike his father, Jr. remains NPC.

While serving in the Middle East, Johnson received word that his mother had been murdered back in the US. He returned home and investigated the crime scene, finding shell casings used by Russians. While leaving his mother's home he was attacked by the Russian hitmen who killed his mom. Marcus took them down and began to question one before being shot with a bow and arrow. He turned around to see Taskmaster standing before him. Taskmaster was about to kill him before Captain America arrived in time to save him at the last moment. S.H.I.E.L.D. agents arrived to try and bring Marcus to safety. Marcus went off with Quake to a S.H.I.E.L.D. facility where he was visited by Cap in the infirmary. He continued to question why everyone was after him and why his mother was killed yet was not given any answers. Soon Marcus began to feel as if he was being held his against his will and broke out.

Marcus contacted an old Ranger friend for help and informed him of his current situation. They planned to find Taskmaster and attempt to get some information. While searching for Taskmaster, Marcus was attacked by Deadpool who was also after Marcus. As they fought, Taskmaster arrived and ran Deadpool through with his sword. Marcus took on Taskmaster and this time gained the upper hand. At that time the Serpent Squad arrived, also looking for Marcus. Johnson took them on, lasting only about fifteen seconds before being electrocuted by Rattler. Deadpool returned, and due to the confusion Marcus was able to escape with Taskmaster as his prisoner. He interrogated Taskmaster, but before he was able to answer, a masked man stunned Taskmaster. He also drained Marcus' energy for a moment and escaped. Marcus caught up with him and unmasked him, the man also revealed himself to be Marcus's father… Nick Fury.

While arguing and eventually coming to blows about the realization, Fury and Johnson were ambushed by more mercenaries, and easily captured. In the custody of Orion, Johnson had his eye cut out (the left eye – same as Fury), and tests were run by Orion’s men… confirming that Johnson had the Infinity Formula in his DNA. Fury managed to slip his restraints and give Johnson enough time to escape (even if accidentally), but Fury was brought in to give Orion a blood transfusion to restore him to a youthful state. The transfusion drained Fury of the remaining Infinity Formula in his system. Fury was then tortured and had his mind probed by Orion’s telepath, wherein they found all of Fury’s S.H.I.E.L.D. secrets and fail-safes.

Marcus saved Fury, and with the help of his friend, Phil "Cheese" Coulson, was able to get Orion alone and kill him. He was taken to get his wounds cared for, and was also given the Super Soldier uniform that Steve Rogers once wore. As a new agent of S.H.I.E.L.D., Johnson was also informed that his birth name was, in fact, Nicholas Fury, Jr..

He resembles as the MCU of Samuel L. Jackson's Nick Fury, because John Eric Bentley sounds like Samuel. 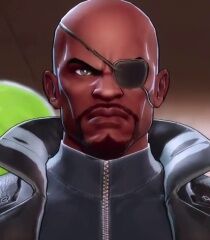