Nick Fury Sr. is a long-time leader of S.H.I.E.L.D. and a central NPC in the two first Marvel: Ultimate Alliance games that becomes a playable hero if the player completes the game on the normal level of difficulty. He is later replaced by his son, Nick Fury Jr. in later games.

Nicholas Joseph Fury Senior was born in Hell's Kitchen, New York on August, 5th 1921. The eldest of three children, Nicholas Joseph Fury grew up in Depression-era New York City with his brother Jacob and sister Dawn. Fury's mother died while he was very young and his father Jack Fury, an American pilot who joined the British war effort during World War I, remarried and the children were raised by his stepmother in lieu of Jack Fury's own early death. It wouldn't be until Nick Fury became a soldier himself overseas that he would learn of his father's military service. Living in the tough streets of Hell's Kitchen, Fury soon became fast friends with Red Hargrove, whom he helped keep out of trouble. Fury himself was no stranger to trouble, but more than often confined it to the boxing ring where he would bout, or in the Police Athletic League where he became one of the finest marksmen.

Nick Fury and Hargrove caught the eye of Lt. "Happy Sam" Sawyer who enlisted them for a special mission in Holland. On this mission, Fury made the acquaintance of his future life-long friend, the circus strongman Timothy "Dum Dum" Dugan. Seeing the Nazi menace firsthand, Hargrove was moved to say he would enlist, and Fury said he would follow him. However, Fury didn't enlist until 1941, but eventually, he reunited with Hargrove, both getting stationed at Pearl Harbor. Following the Japanese attack on Pearl Harbor, Fury was spurred on by the death of Hargrove during the attack to join the U.S. Rangers, and was eventually recruited and reunited with Captain Sawyer who assigned him command of the First Attack Squad; aka the "Howling Commandos," a specially-trained band of soldiers who undertook some of the most dangerous missions of the war.

Together with Dum Dum Dugan as his second in command, Fury led Gabe Jones, Robert "Reb" Ralston, Dino Manelli, Izzy Cohen and Jonathan Juniper, as well as their later additions Percival Pinkerton and Eric Koenig against the likes of Red Skull, Baron Heinrich Zemo, and other Axis villains, fighting alongside such war heroes as Captain America and Bucky. Two serious injuries sustained during this time would have a serious impact on his later life: a grenade blast that began the slow deterioration of his sight in his left eye, and a landmine accident that led to Fury being inoculated with the Infinity Formula by Professor Berthold Sternberg in France. The Infinity Formula substantially slowed his aging process, and Fury was thrust with a double-edged sword: although his life was saved, the consequences of the Infinity Formula would haunt him throughout his life as he would see many friends age and die, as well as become the target of various villains seeking his secret.

In the early 1960s-1970s, he operated as a high ranking CIA agent and after many successful missions in several foreign countries, he was contacted by the Board of Directors of the newly organized international espionage organization S.H.I.E.L.D. (Supreme Headquarters International Espionage Law-enforcement Division) and offered directorship by Howard Stark. Fury and S.H.I.E.L.D. thwarted numerous major threats to the world's freedom launched by such groups as HYDRA and the Zodiac - headed at one time by Scorpio, Fury's brother Jacob. Fury also assisted Earth's superheroes in cases, and S.H.I.E.L.D. spearheaded Earth's defenses during many of its worse crises,

Fury was on the Helicarrier UNN Alpha when it was attacked. He sent out an alert, bringing Spider-Man, Wolverine, Captain America, and Thor to the Helicarrier. He later formed a task force to take down the Masters of Evil, the Ultimate Alliance.

Fury was the leader of the group, sending them on missions and guiding them along the way. He was transported into space along with a group of the heroes by Uatu, and later returned to Earth to fight off many Doombots on his own, eventually sending the team to confront the evil Doctor once and for all. After Doom's defeat, he disbanded the team.

Fury discovered a terrorist plan by Latverian prime minister Lucia von Bardas to attack America. Because the government would not allow S.H.I.E.L.D. to attack Latveria, Fury assembled Captain America, Iron Man, Wolverine, and Spider-Man into a secret team to stop Bardas. They were successful, but a year later, Von Bardas attacked New York anyway. After destroying some of the city, she was stopped by a team of super-heroes. The government found out about the unsanctioned attack on Latvaria and Fury went into self-exile.

Sometime later, Fury rescues a small team of heroes who were severely injured during an attack on the Geffen-Myer Chemical Plant. Taking them back to a secret S.H.I.E.L.D. bunker, Fury heals the heroes and enlists their help in investigating the Pro-Reg Nanite network, which he believes to have been hijacked. Fury guides the team through the infiltration of the Ryker's Island Penitentiary, and after they gain the nanite network logs he and the Tinkerer inform the team of the Fold, a sentient entity born from the growing Nanite network. Fury teleports to Ryker's and enters the Negative Zone Prison 42 along with the team of heroes.

When the Nanite-controlled villains are released, Fury heads off to re-open the portal back to Earth while the heroes go to find a pure Nanite sample, which they hope to use to find a way to defeat The Fold. The majority of the Alliance make it to the portal and return to Ryker's, but Fury is waylayed and caught in the self-destruction of Prison 42 along with a number of heroes and villains.

The Alliance later discover that the Superhumans caught in the explosion were absorbed into The Fold, which has escaped the Negative Zone and has launched an invasion on Earth. Many teams and places are taken over, including the X-Men, Stark Tower, and many others. The Alliance goes to Wakanda to hold back the Fold and liberate Wakanda. While here, they learn that Fury was also taken over by The Fold. Fury offers to stop the attack on the Alliance if they willingly join The Fold, but they refuse and Fury sends an army of Fold warriors to attack the Wakandan Palace; including Green Goblin, Hobgoblin, and Venom.

Realizing that most of their bases are compromised by Fury's knowledge, the Alliance move to Wakanda and form a plan to shut down the Fold using a stasis signal. They go to Iceland and head to the Fold's Repeater Tower to broadcast the signal. After battling through a slew of enemies and controlled heroes they make it to the top of the tower and broadcast the signal.

However, before the Fold can be rounded up and disbanded, Nick Fury, heavily upgraded with stronger nanites, stops the signal and attacks the team of heroes using a variety of powers from Fold members. After an epic battle which destroys much of the top tower platform, Fury is defeated and the Fold is disbanded. After being returned to health by Mr. Fantastic, Fury thanks Captain America and Iron Man for everything they've done against the Fold.

Grab and slam a nearby victim in the ground

Pull out a submachine gun and fire as long as button is held. Allows movement and strafing

Toss a grenade; explodes in a radius

Use a high-powered rifle to shoot a single enemy. Fires on release. 25% chance of instant knockout; if victim is stunned chance increases to 50%.

Reveals all enemies on the automap; also decreases damage taken for the entire party

Go into stealth mode; all attacks have a greater chance of criticals

Calls down an air strike on all visible enemies. Also increases damage inflicted by other attacks in sequence

A standard S.H.I.E.L.D. Agent uniform consisting of a blue zippered jumpsuit with S.H.I.E.L.D. logos sewn over the shoulders, white leather gauntlets, and white boots. Nick Fury also wears an eyepatch over his left eye socket, as well as a white utility belt and various harnesses and legstraps intended for the carrying of ammunition and small firearms.
Leadership - Increase damage and XP for all combo attacks
Boost Stats - Boosts body, focus, and strike stats

A dark-colored, stealth mission-specialized variation on Nick Fury's Classic costume, which is identical in design but has a new color arrangement, with most of the whites substituted for browns and the blues substituted for black. The exceptions to this color swap are the color of Fury's gauntlets, which are black with brown cuffs instead of fully brown, and his utility belt, which is mostly brown leather with a black buckle instead of fully brown.
Marksman - Increased damage with gun attacks
Max Energy - Increase Max energy

Nick Fury's look from the now-defunct Ultimate Marvel line, although this version of the character heavily influenced the more recent cinematic interpretation, especially his portrayal by actor Samuel L. Jackson, whom Fury is modeled after. This greatly simplified outfit consists of a skintight gray shirt with a S.H.I.E.L.D. logo in the area of the right side of the chest, gray pants, and black rubber marksmanship gloves. This incarnation of the Director of S.H.I.E.L.D. also wears brown leather holsters, legstraps, and a utility belt, designed for the carrying of firearms and ammunition. This Nick Fury is also an African-American.
Melee Mastery - Increase Melee damage
Reflection - Reflect Melee damage

None? Nick Fury is a central NPC throughout the game. The playable hero seems to have no special conversation or acknowledgement so far. 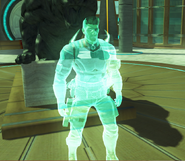 Nick Fury hologram in Wakanda Palace as he explais to the arriving Heroes about the attack on Stark Tower.
Community content is available under CC-BY-SA unless otherwise noted.
Advertisement