The Incredible Nightcrawler, The Devil, Freak, Jokester, Son of Mystique and Child of God

Kurt Wagner was born in Munich, Germany on April, 24th. In the form of a German noblewoman, the shape-shifting mutant Mystique married Baron Christian Wagner. Meanwhile, Mystique had an affair with the mysterious Azazel from La Isla des Demonas and became pregnant with their child. Azazel told Mystique to raise their child as if it were the Counts'. A heartbroken Raven agreed and, while Christian did become suspicious as to the baby's paternity, his sudden "accidental" death ensured no one else heard his suspicions. The baby was born visibly mutated with blue fur all over, pointed ears, iridescent eyes, and a prehensile tail. Due to the shock and the strain of the boy’s difficult delivery, Mystique lost concentration and accidentally revealed her true form. Word spread of her and the baby's condition and mother and son were chased by a torch-wielding angry mob. Mystique passed out and left young Kurt Wagner floating down a river during her escape.

Azazel later admitted that he secretly saved his son from the fall, giving him to his lover and crony, Margali Szardos, to raise him. Margali took the baby to the small Bavarian circus where she worked as a fortune teller, as a cover for her activities as a sorceress. Wagner was never legally adopted by anyone, but he was raised by all the members of the circus, who had no prejudices against mutants. Margali acted as Kurt's unofficial foster mother. Kurt grew up happily in the circus, and his two closest friends were Margali's son Stefan and daughter Jimaine. Long before his teleportation power emerged, Wagner had tremendous natural agility, and by his adolescence, he had become the circus' star acrobat and aerial artist. Circus audiences assumed that he was a normal-looking human wearing a devil-like costume. The villagers of Winzeldorf, who assumed from Kurt's appearance that he was the one who killed the children, attacked. They were about to kill him when they were all psychically paralyzed by Professor Charles Xavier, who came to recruit Wagner into the X-Men. With the codename Nightcrawler, Wagner becomes a member of the X-Men and goes on many missions with them for years before becoming a member of the Ultimate Alliance.

Nightcrawler was first seen attempting to escape Castle Doom in Latveria, using wall-mounted swords to fight off Doombots. However, he failed to escape when a booby-trapped door rendered him unconscious. When the heroes of Earth, all united to combat the Masters of Evil led by Doom, learn of his capture, they use the Orb of Teleportation in the Sanctum Sanctorum to travel to Latveria but are unaware that the orb was rigged by Baron Mordo to send them to Arcade's Murderworld. There, they come into conflict with Jean Grey, who had been consumed by the Phoenix and used as a puppet for the Masters of Evil until her consciousness is brought back. When Arcade is defeated and interrogated, he reveals that Doctor Doom captured Nightcrawler and used the Mutant Amplifier on him so he could teleport to Mephisto's realm and make a deal with said demon.

The heroes travel to Mephisto's realm and fight the many hordes of hell until the demon Blackheart, who had just kidnapped Jean Grey puts the heroes to the ultimate test - which hero will they save, and which will be killed? Jean would give up her life to stop Mephisto and save the team. He felt responsible for what happened to her and was heartbroken after the whole ordeal. In an alternative future, Kurt is the one who dies and a distraught Mystique sneaks into the X-Mansion and takes revenge for her son's death on Charles Xavier. Xavier slips into a coma because of his injuries and dies. Xavier's death causes the X-Men to permanently disband.

As a playable character, Nightcrawler will have a dialogue about thinking that Doom and Mephisto cloned him for their evil plans, unaware the original NPC Nightcrawler is his future-self.

An unofficial patch version of created Dark_Mark of www.marvelmods.com, allows players to be able to save Jean and Nightcrawler with a telekinetic user (mainly Magneto for now). As the team is having a hard time against Mephisto, he arrives with Jean to warn the team that a boundary of Mephisto's will comes from his realm, and Jean’s Phoenix is the key to defeat him, due to the force’s beyond godlike or devilish powers. Jean takes care of the final blow on Mephisto, thus managing to safely escape the realm with Nightcrawler and the team. Due to having a playable counterpart after he and Jean are saved, it is mostly safe that Nightcrawler join the team against Doom, and one of the survivors from Doomification on Earth. 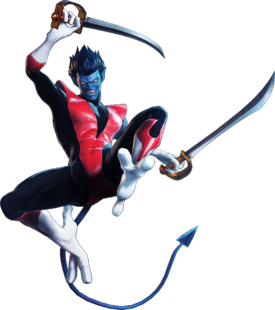 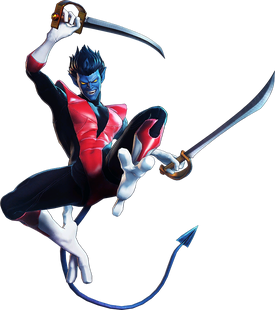 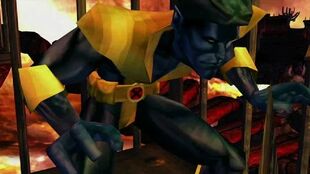