Back to page
View source

The All-father, King of Asgard, Leader of the Aesir, Son of Bor, Gagnraðr, Grímnir, Atum-Re, The Wanderer, Old Man, Orrin, and Infinity

Odin Borson is the ruler of Asgard, father of Thor, and adoptive father of Loki.

Odin is the son of Bor (father, one of the first Asgardians) and Bestla (mother, a frost giantess), and the full brother of Vili and Ve. With the aid of his brothers, a young Odin defeats the fire demon Surtur; later, Odin reveals that his brothers were killed by Surtur, but gave their power to Odin. Later Surtur was imprisoned inside the Earth.[3] Odin thereafter became ruler of Asgard, where he received the epithet of All-Father, and eventually fell in love with the elder goddess, Gaea, by whom he is the father of Thor. After Thor's birth, Odin returns to Asgard, where his wife, Frigga, acts as Thor's mother. Odin is also the adoptive father of Loki, a child of Giant ancestry whose father King Laufey is killed by Odin in battle: adopted in a deal with Bor's spirit, unaware of Bor's intention that the child would bring about Odin's downfall. Despite Odin's intentions, Thor and Loki become bitter enemies. Odin also was the father of Balder from Frigga.

Thor's preoccupation with Midgard (Earth) is a constant annoyance to Odin who, as punishment, has deprived Thor of his powers on at least three occasions. Each time, Thor's willingness to atone for his transgressions, his continued noble intentions, and his bravery, eventually convince Odin to restore his original powers and identity.As ruler and protector of the Asgardian people, Odin has been involved in a number of crises that have threatened Asgard and, on occasion, Earth. Notable examples included stopping Loki, the Storm Giant Skagg, and Surtur (with the aid of Thor and Balder);defeating the Absorbing Man after he absorbs almost all of Asgard; banishing the monster Mangog; sacrificing his right eye to Mimir for the wisdom to stop Ragnarök (Twilight of the Gods); attempting to stop the Celestials in the armor of the Destroyer; engaging inter-dimensional tyrant Dormammu in a "cosmic chess" match as champions of Master Order and Lord Chaos respectively, and preventing Surtur from lighting the Sword of Doom, Twilight.

Odin has also died three times in defense of Asgard. On the first occasion, Odin is killed by Mangog, and later revived by Hela. On the second occasion, the Celestials melt the Destroyer, and thus stifle all Asgardians except Thor, who collects a portion of energy from each pantheon and uses it to revive Odin, who in turn resurrects the Asgardians.The final occasion involves a massive battle against Surtur on Earth, with Odin apparently dying once and for all, when the Odin Force—the source of Odin's power—migrates to his son, Thor.As Thor eventually destroys the Loom of Fates and stops Asgard from perpetuating Ragnarok—which ends the entire Norse pantheon and Asgard itself—Thor believes Odin may be dead permanently. The Odin Force appears to him in humanoid form and says that this was Odin's plan all along.

In Marvel: Ultimate Alliance, Dr. Doom united several villains in a plot to defeat Odin and take his power. Although many superheroes banded together and defeated most of Doom's allies, they were unable to stop Doom from absorbing the power of the mightiest god in Asgard. They were, however, able to scour the universe for resources needed to reabsorb the power and return it to Odin, who then proceeded to capture Doom and Loki, imprison them on Asgard, and punish them for their transgressions. 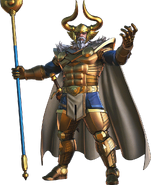