This article is a stub. You can help Marvel: Ultimate Alliance Wiki by expanding it.

Tom Kane
Professor Charles Xavier (or Professor X) is a powerful mutant telepath and leader/teacher of the X-Men.

Charles Xavier was born in New York City to the wealthy Dr. Brian Xavier, a well-respected nuclear scientist, and Sharon Xavier on July 13th, 1940. The family lives in a very grand mansion estate in Westchester County because of the riches his father's nuclear research has brought them. While gestating in his mother's womb, Charles' twin was recognized by Charles as an evil presence and he preemptively tried to kill it with his nascent psychic abilities, causing the fetus' miscarriage.  After Dr. Xavier's death in an accident, Sharon married his colleague Dr. Kurt Marko who brought his son by a previous marriage, Cain Marko to live in their ancestral mansion. Dr. Marko favored the gentle, smart Charles over his own son, which led to Cain constantly bullying Charles and Dr. Marko secretly beating Cain. Sharon married Dr. Marko because she believed that it would be best for Charles. A scholarship to Oxford University rescued him from his abusive home, after which he "never looked back", suggesting he began his academic career as a very young man at Oxford. His stepbrother was resentful of him and. At graduate school, he meets a Scottish girl named Moira Kinross, a fellow genetics student with whom he falls in love but couldn't be with due to Cain making attempts on his life.

He later grows up to attend Oxford University, where he earns a Professorship in Genetics and other science fields, and goes on to live in first Oxford and then London for a number of years. Crucially, as he enters late adolescence, Xavier inherits the mansion-house he was raised in, enabling him not only to continue to live in it but also to turn it into Xavier's School for Gifted Youngsters, which he brings together with the first of the X-Men. The first X-Men consisted of Beast, Mystique, Darwin, Banshee, Tempest, and Magnus. At this time, Professor X and Beast somehow also gained access of a RS-150 Blackbird from S.H.I.E.L.D., as the X-Men's new transportation and the team had dubbed it the X-Jet. As the years went on, he became close friends with Magnus, but their opinions on wither are not mutants should be the dominant species on earth and their arguments finally resulted in Erik eventually leaving the team. Erik change his codename from Magnus to Magneto and became the leader of his own team known as The Brotherhood of Evil Mutants alongside Mystique and Tempest.

As time went on Charles came across Lilandra Neramani, princess of the alien Shi'ar race and the woman he shared an intense psychic bond with across the vast distance that separated their two planets, came to Earth to implore Prof. Xavier for his help against her mad, tyrannical brother, D'Ken Neramani, and he, instantly, aided her by deploying his X-Men. They, then, journeyed to the M'Kraan Crystal's homeworld to battle the Shi’ar Imperial Guard. She wanted him to stay with her and rule by her side but could'nt stay because the team needed him. She understood and let him return to earth but they kept in contact with one another. One day, in a strange town near the Himalayas, Xavier encounters an alien calling himself Lucifer, the advance scout for an invasion by his race, and foils his plans. In retaliation, Lucifer drops a huge stone block on Xavier, crippling his legs. Learning this Magneto kills Lucifer as an act of revenge for his friend. Over the years he came across new mutants like James Howlett, Scott Summers, Ororo Munroe, Jean Grey, Bobby Drake, Piotr Rasputin, Anna Marie, and Kitty Pryde and they became his newest X-Men and contiued his rivarly with Magneto.

Professor Xavier appears in the Sanctum Sanctorum in Act II. He helps the heroes by using Cerebro to locate Nightcrawler and Jean Grey. He is amongst the heroes who are defeated by Doctor Doom and seen on the ground next to Magneto with his wheelchair demolished. Also in the game, if the player chooses to save Jean Grey from being dropped into the Infinity Vortex, Mystique will avenge Nightcrawler by infiltrating the X-Mansion at night to vent her frustration upon Professor X where he will die in a coma months later and his death will cause the X-Men to disband forever (Cyclops, Wolverine, and surprisingly Nightcrawler, are among the X-Men seen surrounding his grave). Professor X has special dialogue with Iceman, Wolverine, Storm, and Magneto.

Professor X does not appear in Marvel Ultimate Alliance 2 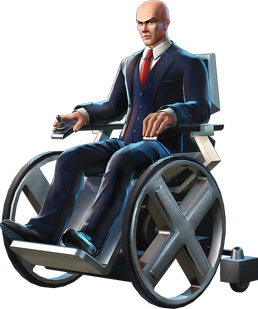