Elizabeth Braddock was born in England on December 8, 1986 and was raised in the small town of Maldon, Essex. Betsy was Sir James Braddock's second child and she, her twin brother Brian, and elder brother Jamie had a very privileged life. By the time she entered college, Betsy had become a charter pilot. After she and Jamie were taken hostage by the Red Skull's agents and freed by Captain America and Captain Britain, Betsy learned the latter was her brother Brian. At this time, Betsy began to develop precognitive powers. She dyed her hair purple and took up modeling. At the age of twenty-one, her psychic powers fully manifested, which grew to include telepathy. Agent Matthew recruited Betsy into S.T.R.I.K.E.'s Psi Division, and she became fellow psi Tom Lennox's lover. As she had inherited membership to the Hellfire Club from her father, Betsy was sent to infiltrate it but was warned off by Tessa for her own protection. She also met future boyfriend Warren Worthington for the first time during one of the Hellfire Club parties.

Unfortunately, Betsy was kidnapped from the Alps by Mojo and Spiral, being surgically given artificial eyes. Mojo mentally controlled Betsy, renaming her Psylocke, and had her star in a popular new show, the Wildways, using her to lure children around the world into joining his junior team show, the Bratpack. When Mojo captured some of Professor Xavier's New Mutants, the rest of the group went to the TV show reality to save their teammates. Betsy was found and rescued by Cypher and Warlock, and chose to stay at the Xavier's School for Gifted Youngsters, as her powers were mutant in origin.[6] Her bionic eyes were revealed to be cameras when Mojo transformed the X-Men into the X-Babies to film their adventures. Betsy and the New Mutants battled the de-aged X-Men to break them free of their brainwashing and defeat the spineless one.
The massacre of the Morlocks occurred shortly thereafter; Betsy was charged with helping the wounded and staying in telepathic contact with the members of the X-Men who were in combat with the Marauders. After the first strike, Betsy faced the savage Sabretooth in a brawl throughout the X-Mansion. Impressed by Betsy's courage, the battle-ravaged X-Men offered her a position on the team, which she accepted, adopting the code name Psylocke.

In the game, she was still a member of the X-Men but was not a part of the Ultimate Alliance. She along with her teammates and other heroes attempted to fight an Odin powered Doctor Doom. Despite her best efforts, Psylocke was easily defeated by the god-powered villain, and she was corrupted with Doctor Doom's powers. Transformed into the new "Dark Psylocke", Betty Braddock became fanatically loyal to her new master and aided her fellow dark X-Men in attacking the Ultimate Alliance when Uatu the Watcher sent them back to Earth. Once again, Braddock was defeated in combat, but this time she was freed of Doctor Doom's control. Psylocke appeared in as a dark version of herself. She was a boss in Castle Doom along with Dark Cyclops. After his defeat, she returned to her normal self along with Cyclops and Colossus.

Two years later, Psylocke joined with Nick Fury's secret Strike Force into Latveria, where she helped infiltrate Lucia von Barda's castle as a member of Bravo Team. After a cyborg von Bardas attacked New York and the actions of the Strike Team were revealed, Braddock continued to work alongside the Ultimate Alliance until the Superhuman Registration Act was passed and split the team down the middle. Psylocke would later help the rejoined Alliance battle the Nanite Fold.

Pyslocke is a very adept person; she is a mix between most of the other female characters. Pyslocke's a very unusual character, for one she can make her own weapons and attack with ferocious might in melee. Psylocke's Cerebral Bolt is much like Jean Grey's Mental Burst, which shoots a small but deadly bolt. Psylocke's Drill Bit is a mirror of Songbird's Thunderous Lariat. Another attack is her Butterfly Swarm which is similar to Ms. Marvel's Photon Burst, but it seeks out enemies like Jean's Mental Burst. The biggest shock is that she can be invisible, Psylocke actually hides from the brain that's processing her! She is also a telekinetic, meaning she has one last-resort attack if she has no energy for powers.

Rolls forward to skewer foes with a psychic blade.

Hits foes with a series of painful sword slashes.

Psylocke creates her trademark telepathic knife and uses it for melee attacks. Evolves into the psychic katana at higher levels. Using this power allows her to use her strong knockback attack, unlike other telepaths.

Surrounds herself in shadow, hiding her from enemies minds. Raises chance of critical attacks while in use (toggle).

Creates a group of psychic butterflies that home in on enemies. Creates more butterflies at higher levels.

Raises damage for all power attacks.

Immunity to all mind controlling effects and mental damage.

Uses reflexes to jump an additional time in the air.

Psylocke returns as a playable character in the third installment of the series. In this, she is a member of the X-Men and X-Force. 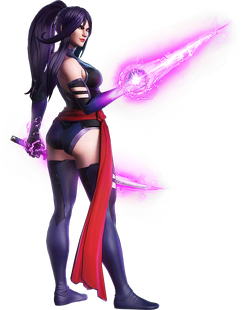 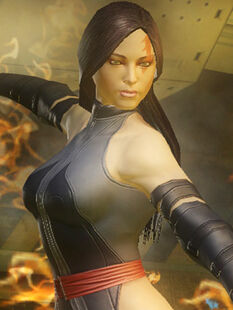 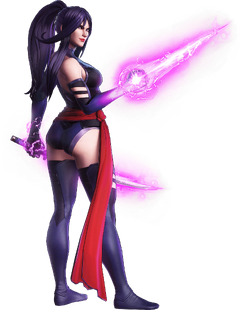