View source
watch 01:36
We're Getting Mutants in the MCU - The Loop
Do you like this video?
Play Sound

Brian Bloom
The Punisher is a playable in Marvel Ultimate Alliance 3: The Black Order.

Frank Castle was born in Queens, New York to Sicilian immigrants on February 12, 1974. Before he enlisted in the Marine Corps, he married his longtime girlfriend, Maria, who was already pregnant with their first child, before enlisting in the United States Marine Corps and eventually rise to the rank of Captain. After finishing his second tour of duty, he came back to the United States and had a second child with his wife. He then signed up for a third tour, for which he illegally re-entered the U.S. Marine Corps under the name of Frank Castle in order to return to battle. Castle ran Special Black op training missions for Marine Recon Commandos in the upper New York State area. While on leave, Frank took his wife and two small children to Central Park in New York City. Coincidentally, the family happened upon the scene of a mob killing on the Sheep's Meadow green in the park. Fearing witnesses, the mobsters murdered Castle's family in cold blood and escaped. Castle managed to survive the attack but was deeply traumatized by the incident. He was going to testify in court to identify the shooters, but Castle was denied this since the New York City Police department was deeply connected with the Mafia. He decided not to return to Marine duty due to this fact. When mobsters slayed his family, Frank Castle vowed to spend the rest of his life avenging them. Now equipped with state-of-the-art weapons, he wages a one-man war against crime as the Punisher. Castle uses his combat experience, guerrilla and urban warfare techniques, as well as detective-like skills to achieve his mission. This includes using the Mafia's own tactics against them to track down and kill those responsible for the death of his family.

A few years into his career, Castle was found by a police officer and arrested for his crimes, stating that he would not fight the police and they were on the same side. While in prison on Ryker's Island, Frank continued his war on crime by killing his fellow inmates whenever they attacked him, as happened regularly, as he was understandably not very popular with the criminals there. However, Castle was busted out of prison by a cop who wanted to use him to stop a narcotics shipment that he was instructed to leave alone. When he killed the drug dealers he learned that they were using children in their operations. He declined to go back to jail and instead went to track down the drug dealers.

Castle was confronted by Daredevil, who was trying to take them down legally. While trying to take out one of the dealers someone killed his target first. Later during an interrogation of the thugs, Daredevil showed up enraged by Castle's lethal methods. Because Daredevil is "an innocent", Castle decided not to kill him and shot him with a tranquilizer dart and continued with the interrogation. After the interrgation he and Daredevil decided to go after the dealers and it was one of the few nights that he did not kill anyone. In later years, he clashed with Spider-Man, believing him to be a common crook, but due to some interference from Daredevil he let him go and they became uneasy allies. He faced major threats throughout his career like Jigsaw, a mobster whose face was difigured by Castle years ago, Kingpin, Ma Gnucci, Barracuda, Bullseye, The Russian, Tombstone, CIA agent William Rawlins, Maria Carbone, and The Rev. He also became a member of the Marvel Knights. 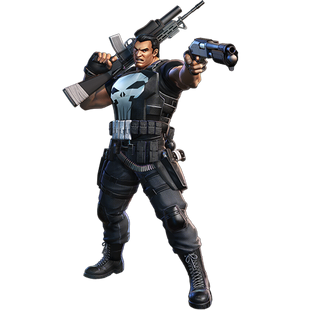 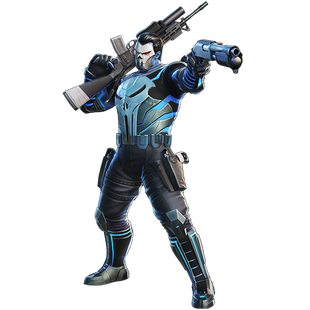 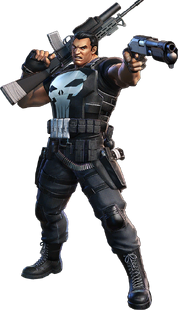