Robert Tinkler
Quicksilver is a boss in Marvel: Ultimate Alliance 2, exclusively on the PS2 and Wii versions of the game.

The character first appears with his twin sister, the Scarlet Witch (Wanda Maximoff), as a part of the Brotherhood of Evil Mutants. The siblings were originally presented as mutants, with Pietro possessing superhuman speed and Wanda able to control probability. The pair are recruited by Magneto after he saves Wanda from a mob when she accidentally causes a house to burst into flames. Quicksilver stays with her to protect her. After several confrontations with the X-Men, they depart when Magneto and his lackey the Toad are abducted by the cosmic entity, the Stranger. They then travel back to Europe. Pietro and his sister reform and are recruited by Captain America to the superhero team The Avengers after they discover they are advertising for new members and want to get support for themselves. 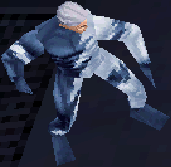