Wanda Maximoff and her twin brother Pietro Maximoff (Quicksilver) were raised on Wundagore Mountain in Eastern Europe, believing themselves born as mutants to a Romani couple named the Maximoffs. Given the name Wanda, she lived for a short time in childish innocence until local troubles involving her parents separated her and her brother from them and forced her to hide her growing powers.

Eventually, Wanda and Pietro fell under the wing of Magneto, and, as the Scarlet Witch and Quicksilver, they joined his Brotherhood of Evil Mutants. Following violent clashes between the group and the heroic X-Men, the siblings struck out on their own, unhappy with their alliance with Magneto and unsure of their future. When the founding members of the Avengers disbanded, leaving Captain America to continue the team, Wanda and Pietro accepted an invitation of membership, hoping the Avengers might help them reverse their reputations as villains.

Over the years, Wanda and her brother became respected heroes in the eyes of many. For a while, she and her brother believed they were the children of Magneto himself, however this turned out to be false. It was also discovered that they are not mutants, and that their powers are actually the result of an experiment by The High Evolutionary when they were infants. 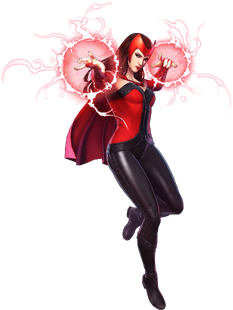