Marvel: Ultimate Alliance Wiki
Register
Don't have an account?
Sign In
Advertisement
in: Villains, Bosses, Masters of Evil,
and 11 more

Mac Gargan was born in Manhattan, New York on December, 19th 1964. He was a private investigator initially hired by J. Jonah Jameson to find out how Peter Parker is able to obtain incredible pictures of Spider-Man.[5] Gargan's efforts set off Peter's spider-sense and the teen easily evades the detective. Jameson then decides to hire Gargan as the subject of a barely-tested process that would endow him with the useful characteristics of a particular animal with the help of Dr. Farley Stillwell. Dr. Stillwell also outfits him with a club-like mechanical tail. In this case, a scorpion is a base for the purposes of creating a powerful agent capable of defeating Spider-Man as the scorpion is a natural predator of the spider.

The Scorpion proves to be more than a match for Spider-Man, defeating him twice, but the mutagenic treatment seriously affects Gargan's mind, driving him insane as the predatory instincts of the scorpion take over. He promptly turns on his benefactor but Spider-Man intervenes, and finally defeats the Scorpion in their third battle.[6] The Scorpion becomes a professional criminal and returns to indulge in a vendetta against Spider-Man and Jameson, only to be defeated again.

Scorpion telling the Ultimate Alliance about his team. Scorpion was part of the team of Villains sent to attack the SHIELD Helicarrier and was the first to tell the team of Heroes about the Masters of Evil. He was easily defeated soon after. Gargan somehow escaped the Helicarrier and was sent to guard the imprisoned Tyr with the Lizard. Even though he had donned a new, stronger suit he was again defeated. Sometime after the Masters of Evil had been defeated, Mac bonded with the Venom symbiote. He was captured by SHIELD and Iron Man's Pro-Reg movement and was injected with experimental Nanites to keep him under control. But he wasn't seen after that at any point in the game. 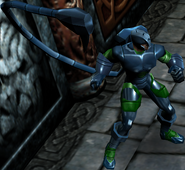 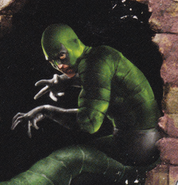