Superhuman Strength, Speed, Agility, Ability to cling to most surfaces, Use of inter dimensional travel, Healing factor, and Precognitive Spider-Sense

Spider-Gwen (real name Gwen Stacy, or aka Spider-Woman in series) is an alternate reality superheroine counterpart of original Gwen Stacy who appears in Marvel Ultimate Alliance 3.

On Earth-65, instead of Peter Parker, it was Gwen Stacy who was bitten by the radioactive spider. To be 'special' like Gwen, Peter (of her universe) injected himself with lizard DNA and turned into a rampaging lizard monster. After a fight, Gwen killed the beast thinking it was a mindless monster, but upon death he transformed back to Peter. To try and make up for her murder of her best friend, Gwen went on to become a superheroine, even though she may have to get through of her father, Captain George Stacy, whom Gwen saved him in her universe.

In the original Earth-616, Gwen and her father died tragically, starting from the latter, who is one of Spider-Men supporter of his world died heroically during Doctor Octopus' attack, followed by Gwen killed by Green Goblin (who happens to be related to one of her ex-boyfriends, Harry Osborn's father Norman).

Gwen's personality is similar to that of the original Gwen Stacy of Earth-616 albeit a bit more tomboyish.

Gwen wears a white and black costume, with a white hood, that has a blue and red web-like pattern on the inside.

Swing Time: Gwen shoots a string of web into the air, then uses the momentum for a swing attack in the area. You can tap the attack button to lengthen the attack.

Legit Beatdown: Gwen creates a giant ball of web and swings it around her head in a circle, hitting enemies in an area.

Catchy Attack Name: Gwen releases multiple we blasts in front of her. You can tap the attack button to produce more webbing.

Disappearing Act: Gwen warps into the air above enemies and then slams to the ground unleashing a devastating shockwave. Players can hold the attack button to aim.

Like most of the Spider-Man characters, Gwen's stats are mostly rounded, with a few being above average. In her case, Gwen's Strength and Energy are the highest among the group, making her the best as an offensive character. Her moves such are notable as each has some great perks. Unlike Miles', Peter's, and Eddie's 'web shot' attacks, Gwen fires a spreadshot of webs, allowing for lower damage per shot, but is able to hit multiple enemies. Legit Beatdown and Swing Time are notable clearing moves, and are capable of decent damage. Disappearing Act is great at getting her out of range of enemy attacks.

He only real downside to Gwen, is that, while her moves work well on crowds, she struggles against bosses, as her attacks are best suited for attacking multiple enemies. 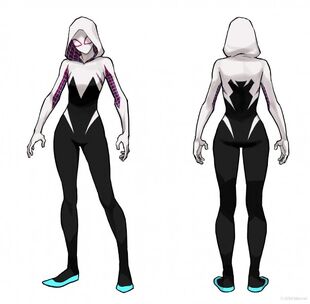 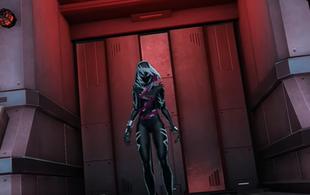 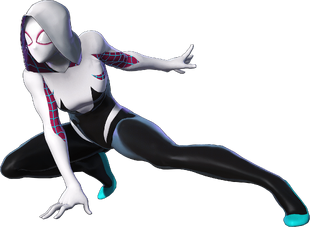 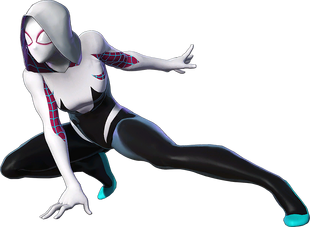