Spider-Man (Miles Morales) is a hero that appeared in Marvel Ultimate Alliance 3.

Young Miles Morales was poised to start the next chapter in his life in a new school. Then, the bite of a stolen genetically altered spider granted the grade schooler incredible arachnid-like powers. Now Miles has been thrust into a world he doesn't understand, with gut instinct and a little thing called responsibility as his only guides. Can he live up to the legacy of Spider-Man?

Miles' costume is similar to that of Peter Parker, except black with red patterns on it.

Surprise Strike: Miles turns invisible then closes in on enemies to strike with a burst of electricity.

Venom Strike: Miles drives both fists into the ground and releases a large sphere of electric energy in an area attack.

High Voltage Lines: Miles shoots a barrage of electrified webs at groups of enemies in front of him.

Miles much like Peter, Gwen, and Venom, is well rounded, with two stats they excel in. In the case of Miles, it's his Mastery and Resistance. His Master especilly comes in handy due to his moves being 'Energy' damage attacks. His moves often have a Shock attribute, and will allow him to occasionally paralyze enemies. 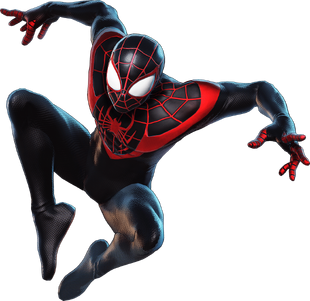 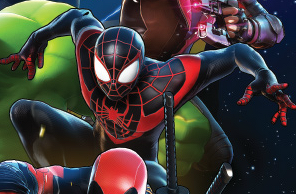