Spider-Man, aka Peter Parker, is a superhero who gained his powers from a radioactive spider. He is the flagship character of Marvel Comics and has become one of the most recognizable superheroes in the world. He was one of the only three characters, the other being Wolverine and Captain America, to be the starting playable character at in two previous Marvel Ultimate Alliance games prior the third game.

Peter Parker was born in Forest Hills, Queens, New York on August 15th, to Richard and Mary Parker, who were C.I.A. agents, they were later killed in a plane crash when he was a young child. He was later adopted and raised by his Uncle Ben and Aunt May. Throughout his childhood, he became friends with Harry Osborn, Mary Jane Watson, Hobie Brown, and Gwen Stacy, who would later become his girlfriend.

At age 15, he was bitten by a radioactive spider at a science exhibit and "acquires the agility and proportionate strength of an arachnid". Along with heightened athletic abilities, Parker gains the ability to adhere to walls and ceilings. Through his native knack for science, he develops a gadget that lets him fire adhesive webbing of his own design through small, wrist-mounted barrels. Initially seeking to capitalize on his new abilities, Parker dons a costume and, as "Spider-Man", becomes a superhero. However, "He blithely ignores the chance to stop a fleeing thief, and his indifference ironically catches up with him when the same criminal later robs and kills his Uncle Ben." Spider-Man tracks and subdues the killer and learns that the killer only wanted his uncle's car but ben refused. As Peter felt guilty and full of sorrow for Ben's death, he remembers his uncle's last words, "With great power, there must also come—great responsibility".

Throughout the years, he has made many enemies, including Green Goblin, Doctor Octopus, Venom, Sandman, The Lizard, Beetle (Abner Jenkins), Kraven the Hunter (Sergei Kravinoff/Alyosha Kravinoff), Electro, Vulture (Adrian Toomes/Blackie Drago), Mister Negative, Rhino, Scorpion, Shocker, Mysterio, Alistair Smythe, Chameleon, Hammerhead, Tombstone, Prowler (Aaron Davis), Hobgoblin (Jason Macendale), Hobgoblin, Arcade, Tinkerer, Hydro-Man, Cyclone, Molten Man, Boomerang, Mad Jack, Kingpin, and Carnage. Even with the enemies that he has made over the years, he also made allies with other super-powered individuals like Daredevil, Luke Cage, Black Cat, Blade, Silver Sable, Human Torch, Prowler, Iron Fist, Punisher, and Iceman. And with his new allies, they formed a team known as the Marvel Knights and continued to fight crime in large scales. Eventually, his girlfriend Gwen is kidnapped by the Green Goblin and dies during Spider-Man's rescue attempt due to the whiplash effect she underwent when Spidey's webbing stopped her so suddenly. When he got into another battle with the Goblin in an attempt to avenge Gwen, the Goblin appears to kill himself accidentally in the ensuing battle with Spider-Man with his glider crashed into his body.

After her death, Peter is sent into a deep depression and he retires from his heroic duties. Mary Jane decided to get him out his current state and he finally gets back to defending New York and the two become a couple. Even though he was in a new relationship with Mary Jane, the dangers did not cease and he would not stop defending the city despite his many hardships and battling his enemies. He gained many new allies and fought new foes when he became a core member of the Ultimate Alliance.

When the S.H.I.E.L.D. Helicarrier UNN Alpha is attacked by a group of super-villains, called the Masters of Evil led by Doctor Doom, Thor teleports Spider-Man, along with Captain America and Wolverine onto the ship's deck. The four-fight through the Helicarrier to the Bridge, defeating Scorpion on the way. They then defeated Bullseye and Fin Fang Foom to rescue the U.N.N. Alpha. From there on out, the entire story with regard to Spider-Man is variable, as the player can choose to include or exclude him from part of all of the remaining story. Though this is true for the in-game portions, Spider-Man is often shown during the cinematics before and after missions, often adding his own comments to the conversation.

Two years after the defeat of Dr. Doom and the Masters of Evil, Nick Fury again brings the heroes together, this time for an attack on Castle Doom. Fury brings a slightly different team with him this time consisting of Spider-Man, along with Wolverine, Captain America, and Iron Man. The five-fight waves of Latverian warriors, defeating Electro, who was powering the Castle, Scorcher, Wizard, and was then sent with Wolverine to meet up with Bravo squad, and defeat the Tinkerer. Though he is again open to complete or partial inclusion or exclusion, Spider-Man can have certain moments that are specific to his characters, such as conversations with Venom and Green Goblin.

As the Civil War continues, Spider-Man and the other heroes are forced to help Nick Fury in investigating the nanites that Iron Man and S.H.I.E.L.D. had been using in controlling supervillains. The heroes discover that the nanites have evolved into a large collective intelligence known as the Fold, which seeks to assimilate every life form on Earth. Nick Fury himself is assimilated, forcing Cap and Iron Man to temporarily suspend the Civil War so that all heroes can fight the Fold.

Although several major hero teams are defeated across the world, Spider-Man and his allies manage to establish a new base of operations on Wakanda. There, the heroes manage to modify a stasis code that will allow them to defeat the Fold. To do so, they must upload the code in one of the Fold's repeater towers. Spider-Man and his allies go to Iceland and manage to upload the code, neutralizing the Fold. Suddenly, the heroes are attacked by Fury, who has been injected by a new set of nanites immune to the code. After a long and fierce battle, Spider-Man and his allies defeat Fury and purge him of the nanites. With the Fold defeated, the President of the United States declares the Civil War over and pardons every hero that joined Captain America's resistance movement.

Grabs an enemy and swings him around, doing radial damage to enemies nearby (Chargeable)

Uses webs to pull himself back and shoot himself forward. (Chargeable)

Uses the web to fling an enemy into the air. Charge longer to increase the distance an enemy will soar

Team Xtreme attack that will grab enemies and spin them into web sacks. It cannot be used against bosses.

Spidey's most famous and well-recognizable outfit: consisting of a blue bodysuit with spider-symbols (small one on the front, large one on the back) and a web-pattern sewn into both front and back of the red-colored areas, accompanied by a red web-patterned mask with white one-way lenses to enable vision, red knee-high boots bearing the web-pattern, and red web-patterned gloves.
Reflect Melee - Reflects a percentage of melee damage back at the attacker
Web Damage - Increases the amount of damage done by web attacks

The costume was worn by Spider-Man's clone Ben Reilly as the ill-fated Scarlet Spider. This costume consists of an all-red spandex leotard, accompanied by red gloves and boots, a red mask with white one-way lenses for vision, leg straps, and large externally-placed web-shooters, and a blue denim sleeveless vest with a black spider-logo emblazoned onto it.
Web Damage - Increases the amount of damage done by web attacks
Experience - Increases the amount of XP gained

A red-colored, gold-plated suit of hi-tech armor made to resemble other variants of Spider-Man's costume, complete with golden one-way lenses built into the faceplate and a whimsical, golden spider-emblem on the front.
Evade - Increases chance to dodge all incoming melee attacks(Maxes at +13% dodge chance)
Striking - Increases striking stat

Spider-Man throughout Ultimate Alliance history has probably remained one of the most dependable and consistent characters in the series. At first glance, Peter seems pretty simply or weak in all 3 installments but if you keep him on your team and constantly upgrade him then his usefulness becomes very apparent, he is a survivor and excells at drawing enemy agro then running (or in his case swinging) away while his teammates recover and begin attacking again or in special cases survive entire boss encounters by himself but I'll describe Spider-Man's changes per game

In Ultimate Alliance, Spider-Man is among the first 4 characters you play as and he mainly excels in ranged fighting, dealing with small mobs and best of all boss fights. He sports very good powers at his disposal like Web Snare, Yank, Throw and Bullets along with one of the best buffs in the game his trusty Spider-Sense. He is extremely reliable in terms of his survivability because of his high dodge/evade chance with Spider-Sense doubling if not tripling.

Peter returns for the series reboot. Much like other spiders, Peter's stats are pretty rounded. While the other Spiders ended up having two stats they excel in, Peter is balanced in all ways, making him a jack of all trades. However, his moves are pretty decent, with the ability to bind multiple enemies with his Spider Drones. 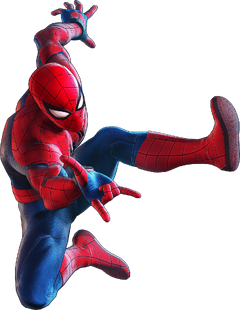 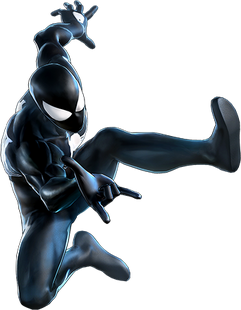 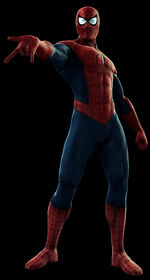 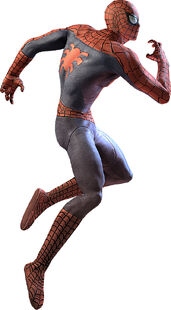 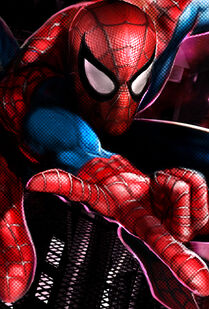