Ororo Munroe was born in Harlem, New York City on April, 3rd 1981. as the child of Kenyan tribal princess N'Dare and American photographer David Munroe. When Ororo is six months old, she and her parents move to the Egyptian capital of Cairo. Five years later, during a conflict between two armies, a fighter jet crashes into her parents' house, killing them. Buried under tons of rubble, Ororo survives but is orphaned and left with intense claustrophobia. Her fear was once so intense that she was known to curl into a fetal position and approach a catatonic state. After the death of her parents, Ororo wanders Cairo's back-alleys for a few weeks, Following an inner urge, she wanders into the Serengeti as a teenager until she is picked up by the benign street lord Amahl Farouk. and becomes a prolific thief.

One day while running away from the authorities, she meets T'Challa, who would become her future husband and the hero Black Panther. Despite strong mutual feelings, the two part ways. After T'Challa left to return to Wakanda, she continued her criminal ways but soon realizes she can do better than just rob people but help those less fortunate. Ororo helped the people of Cairo and to them, she was a goddess and makes amends for her past crimes. She tries to run away from Farouk but was hit with a mind strike that knocks unconscious but she was saved by her future mentor Professor X  who is there to stop Farouk who was actually the telepathic demon known as the Shadow King. The two defeated him Prof. Xavier explained to Ororo that she was not a "goddess" or a thief, but a mutant and had a responsibility to use her abilities to help the world, just as she had helped the local tribes. Curious, Ororo accepted Professor Xavier's offer and was given the codename "Storm due to her weather manipulation powers.

She later becomes a member of the X-Men and was initially very naive when it came to the customs of the modern world, but her teammate Jean Grey (Marvel Girl), helped educate her in the ways of society and the pair formed a lasting friendship. In her early career with the X-Men, she suffers a major claustrophobic attack, which prompts a revelation of her origin to her teammates. When Magneto captures the team, Storm frees the X-Men from captivity. Due to her brave actions, she was made deputy leader of the X-Men and supplants her colleague Cyclops as leader of the X-Men, a role she fills out during most of her time as a superhero. Storm remained with the X-Men for years and eventually reunited with T'Challa, who was now an Avenger and the two got married. Years later she became a core member of the Ultimate Alliance.

Casts lightning bolt down on an enemy

Lightning shoots from Storm's hands chaining from enemy to enemy

Attaches a hail storm to an enemy damaging other enemies nearby

A look reminiscent of the one Storm possessed in the 1990's X-Men animated series. This all-white costume consists of a long-sleeve bodysuit bearing two X-symbols over the clavicles, shoulder pads, wristbands, and rubber gloves.
Weather Mastery - Increases the damage of all powers
Momentum - Increases the amount of momentum gained

When the Civil War began, Storm flew back to Wakanda to be with her husband T'Challa

Storm doesn't quite approach the status she had in previous iterations in this series (especially X-Men Legends); but, she is strong. The big negative is actually her clearing Power, Gale Force, which clears a little too well. It throws mobs quite a distance without doing a whole lot of damage. This is okay if you're on a high point and enemies are being thrown to their deaths, but when they're just getting to their feet again – now too far to reach with anything else – it's a bit of a problem. Her high Teamwork makes her a good choice for Fusion attacks; but, she lacks a good boss-killer Power of her own. 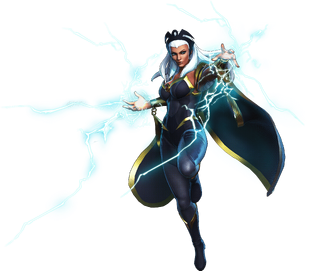 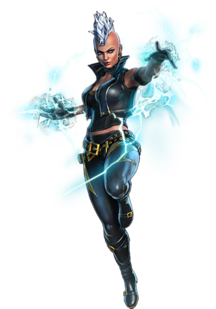 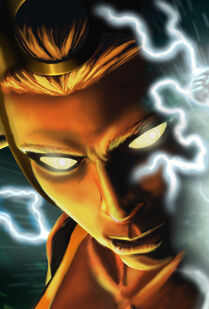 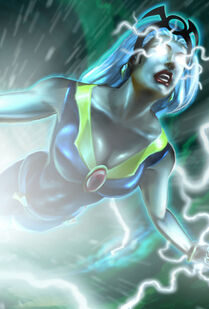 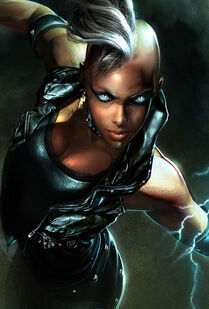 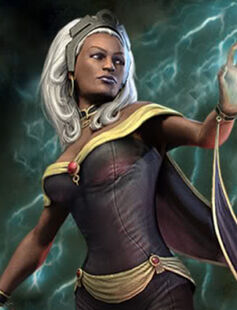 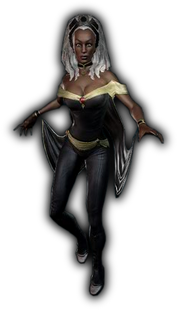