The Mad Titan, Dark Lord, The Most Powerful Being in the Universe, Almighty Thanos, Son of A'Lars, Madman, Prophet, and Genocidal Maniac

Thanos, born Dione appears as the main antagonist (later final protagonist) in Marvel Ultimate Alliance 3: The Black Order. Ironically, Thanos has two separate playable versions of himself, one is without Infinite Six, who act as an ally; while another is with the said Six, who act as a boss in the base game and the last secret sixth DLC character of The Black Order Expansion Pass.

Before re-appearing in the 3rd game, Thanos made a cameo appearance in ending choices of Marvel: Ultimate Alliance, depending on player’s choice on saving Odin Borson or not at Castle Doom.

Thanos was one of the last sons of A'Lars, progenitor of the second colony of Eternals on Titan, and Sui-San, the last survivor of the original settlement of Eternals in this moon. He was born with purple, hide-like skin and a massive body due to his Deviant Syndrome. The very first time his mother laid her eyes on the baby, she was driven mad and tried to kill him. Dione was originally his birth name, decided by his mother, prior to his rename as Thanos.

Despite his unusual appearance and introvert nature, Thanos was well accepted by his peers. He was a mild-mannered intellectual that dreamed of becoming a scientist like his neglectful father. However, signs of his true nature started to creep up early on. For instance, he liked to draw dead animals despite vomiting at the prospect of performing a dissection. Thanos' life reached a tipping point when a mysterious girl convinced him to explore with his friends a dangerous cave to overcome his fear of killing. A cave-in separated Thanos from his friends for three days, during which he refused to even think of murdering the inoffensive creatures that lurked underground for sustenance. When he found his friends, they had been killed by the animals living in the caves. After Thanos returned to society, the same girl convinced him to go back to the cave and slaughter the critters in revenge.

Later, Thanos had become fascinated with nihilism and death, worshipping and eventually falling in love with the physical embodiment of death, Mistress Death.  As an adult, Thanos augmented his physical strength and powers through his superior scientific knowledge. He also attempted to create a new life for himself by siring many children as well as becoming a pirate. He finds no fulfillment in either until he is visited again by Mistress Death, for whom he murders his offspring and his pirate captain. As part of his pursuit for power, Thanos amassed a huge armada of battleships. Having kept the planet Earth under surveillance since it first exploded a nuclear weapon, Thanos learned of a power-object called the Cosmic Cube.

Transformed into a godlike wraith by the Cosmic Cube, Thanos battled the Avengers and the Kree Captain Marvel, the former of whom had already vanquished his armada. When Thanos carelessly discarded the Cube, believing falsely that he had drained it of all power, Mar-Vell struck the cube, willing it to restore the universe to what it had been. Robbed of power, Thanos reverted to mortal form in the center of the universe where his flagship Sanctuary II retrieved him under pre-programmed instructions. Revived, Thanos was dejected to discover that Death had abandoned him because of his failure.

For some reason, he a Inhuman woman have had relationship with someone else, and eventually giving a birth of his illegitimate son, Thane.

Thanos is a major antagonist of the game, but later becoming a final protagonist after switching roles with his son Thane.

When his daughter, Nebula betrays him to work with the Kree Empire, to ensure the Infinity Stones never fell into his hand, Thanos send the Black Order to find them. Thanos and his Black Order able to secretly use the Guardians of the Galaxy as the trackers to find Kree Ship where Nebula and Ronan kept the stones. Unfortunately when the Guardians found out they’ve been secretly used by Thanos, the leader Star-Lord uses a Space Stone into accidentally scatters four stones to be fallen into the Earth’s villains’ hands, while the fifth stone, Reality Stone fell into Dormammu’s hand at Dark Dimension.

Green Goblin, who had the Time Stone and using it on a bad timing at his defeat in a same time, somehow gain a traumatic vision of Thanos’ reign, if the Ultimate Alliance (in which the Guardians now part of) unable to save the universe.

Primarily, Thanos’ first stone would be the Power Stone. He and his Black Order arrived on Earth after the alliance collected all other three missing stones on Earth and currently fighting over the Power Stones between the Brotherhood of Evil (sent by Hellfire Club, who had the said stone before the X-Men’s Nightcrawler and Psylocke steal it back to their allies) and the Sentinels (hacked by Ultron earlier before his defeat and trapped in a Mind Stone he wielded). As the Black Order arrives on X-Mansion, located on Earth, it is unfortunate that the Brotherhood made a temporary truce into joining the Ultimate Alliance due to Thanos’ presence will endanger the mutant species. The allied forces of Earth’s villains and heroes escaped with the four stones into the Dark Dimension thanks to Magneto’s daughter Scarlet Witch, while Cyclops, Colossus, Juggernaut and Mystique hold off the Black Order to ensure their allies escape safely with the remaining stones. As the mission fails, just as the alliance finally escaped, Thanos orders his Black Order to fallback and have a plan to wait for the alliance collect all six stones until the time has finally come to steal them.

As the AIM attacks on Wakanda reaches his ears and got a good news that the alliance brought his son Thane along with them after an incident at Attilan, Thanos finally deploys his Black Order and to have his son join him. The mission is success, as the Black Order’s Proxima Midnight send the alliance into somewhere much worse outside, which revealed to lead them into battling the seemingly unstoppable Surtur and Hela, who are also backed by Hydra into invading Thor Odinson’s homeworld, Asgard.

Thanos led his army to wage war with the alliance’s allies Nova Corps at Knowhere, surprises that the heroes survived the battle against Hela and Surtur thanks to Loki, leading Thanos to exit his ship off-screen and join the battle. When a clash between the alliance and the Black Order was stopped by Thane, whom Thanos given him a Time Stone and recently having a self-conflict, Thanos, knowing Thane well, admit he shouldn’t be ended up like him, knocking his son out and uses all stone to his Infinity Gauntlet to transport everyone in Knowhere at his throne, preparing a final battle between him and the alliance. Unfortunately during a middle of battle against the alliance, Thanos made a big mistake for attacking Thane behind, furthering his corruption by the stone’s power upon waking up back. A corrupted Thane uses his a powerful telekinesis to take the stones-infused Infinity Gauntlet and summons all parts of Infinity Armors, much to Thanos’ horror as the alliance does. The fallen Thane transported everyone into the center of the location where the stones’ created and will kill everyone to prove he is better than Thanos. Thanos made a temporary truce with the alliance to stop his fallen son, knowing him too well as well as the usage of fully utilized Infinity Armor, which proves to be fatal to the users, even Thanos himself has a standing not to wear the full armor by this side-effect. True by Thanos’ fear, the side-effects of fully equipped Infinity Armor progressively killing Thane, and Thanos volunteer to die alongside his son by destroying the full armor along with it, returning all heroes back to his old throne, along with the stones. Ebony Maw attempts to take the Infinity Stones for himself, but is arrested by Richard Rider and the Nova Corps as Richard plans to have him and the Black Order remanded to the Kyln. Afterwards, the chosen alliances members are tasked to keep each separate stones at even more safe places.

A mysterious pair of eyes are seen inside the Infinity Stones. 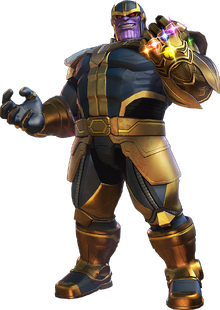 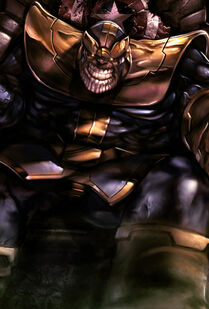