Ben Grimm was born on Yancy Street on Manhattan's Lower East Side, where he grew up in poverty. His father, an alcoholic, was unable to hold a job. Much of the family's income came from Grimm's older brother, Daniel, who obtained funds illegally as leader of the Yancy Street Gang. Grimm, who idolized his brother, became embittered against the world when Daniel was killed in a battle between rival gangs. Grimm was only eight years old at the time. Within ten years, he had succeeded his brother as leader of the Yancy Street Gang. After his parents died, Grimm was taken in by his Uncle Jake, who had risen from poverty to become a successful physician. At first, Grimm resisted his new guardians' kindness toward him. But eventually, he came to return their love. He left his life with the Yancy Street Gang behind, entered high school, and became a football star there. While he was a senior at Stuyvesant High School, Ben received a football scholarship to State University in Hegeman, New York. On the football field, Ben received the nickname "Grimm Reaper.

Grimm's freshman year roommate was the brilliant science student Reed Richards, who became his closest friend. During their first meeting, Richards confided in Grimm his intention someday to build a starship for interstellar travel. Grimm jokingly promised that he would pilot the starship for Richards if he ever built it. Upon graduating, Grimm went into the U.S. Air Force and became a highly skilled fighter pilot, as well as a test pilot and an astronaut. In the meantime, Richards went ahead with his project to build a starship, using both his own fortune and funding from the Federal government. On the day that Grimm left the military, Richards came to him to remind him of his promise to pilot the starship.

After the government denies him permission to fly the spaceship himself, Richards plots a clandestine flight piloted by Grimm and accompanied by his future wife Susan Storm, who had helped provide funding for the rocket, and her younger brother Johnny Storm, who helped the group gain access to the launch system. Although reluctant to fly the rocket, Ben is persuaded to do so by Sue, for whom he has a soft spot. During this unauthorized ride into the upper atmosphere of Earth and the Van Allen Belts, they are pelted by a cosmic ray storm and exposed to radiation against which the ship's shields are no protection. Upon crashing down to Earth, each of the four had to learn that they have developed fantastic superhuman abilities. Grimm's skin is transformed into a thick, lumpy orange hide, which gradually evolves into his now-familiar craggy covering of large rocky plates. Trapped in his monstrous form, Grimm is an unhappy yet reliable member of the team. He trusts in his friend Reed Richards to one day develop a cure for his condition. However, when he encounters blind sculptress Alicia Masters, Grimm develops an unconscious resistance to being transformed back to his human form. Subconsciously fearing that Masters prefers him to remain in the monstrous form of the Thing, Grimm's body rejects various attempts by Richards to restore his human form, lest he loses Masters' love.

The Thing was one of the heroes who went with Fury to Latveria, and when the Civil War erupt, Thing disappeared, wanting to stay Neutral. The Pro-Registration forces were attacked at Yancy Street, and the Thing appeared angry for the War coming to him, defeating a nanite controlled Lady Deathstrike and a freed Multiple Man. He decided to join the fight in the Civil War, and later fought the Fold when they took over the world.

The Thing smashes the ground with both fists causing huge ripples in the earth, knocking enemies off their feet. Does double damage to enemies lying on the ground

Charges forward destroying everything in his path

The Thing wears a simplistic "costume" comprised of nothing more than blue pants fastened by a belt with a 4-emblem buckle and navy blue boots.
Critical Strike - Increases critical strike chance
Rock Hard - Reflects some damage back to melee attacker

The quintessential look of the Thing, dating back to his very first appearances in the Silver Age, is but a pair of blue shorts. His rocky exterior is also lumpier and less smooth-looking than in other appearances.
XP - Increases amount of XP gained
Boost Stats - Boosts body, focus, and strike stats

A sleeveless jumpsuit bearing a 4-emblem in the area of the chest and containing blue, blue-green, and blue-gray regions.
Power Damage - Increases the damage of all powers
Max Health - Increases maximum health

After hearing news on the SRA, Ben leaves a message for Reed saying he's going underground to lay low for a while. He would then appear in Manhattan helping out the heroes. 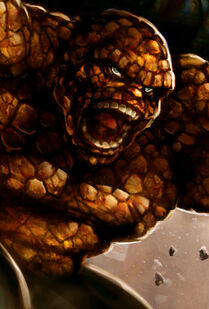 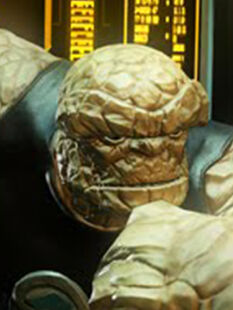 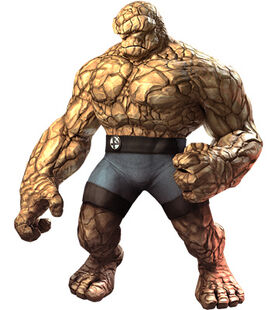 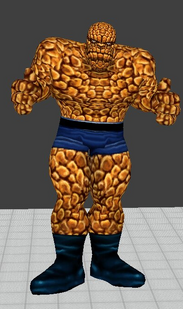