Thor Odinson is the blood-son of Odin, All-Father of the Asgardians, and Jord, who was also known as Gaea, the goddess who was one of the Elder Gods. Odin sought to father a son whose power would derive from both Asgard and Midgard (as the Earth realm is called by Asgardians), and hence he sought to mate with Jord. Odin created a cave in Norway where Jord gave birth to Thor.  Months after the infant Thor was weaned, Odin brought him to Asgard to be raised. Odin's wife, the goddess Frigga, acted as Thor's mother from that time onward. Not until many decades later did Thor learn that Jord was his birth mother.

The young Thor was raised alongside Loki, who had been adopted by Odin after Loki's Frost Giant father Laufey had been killed in battle. For all of their childhood, Loki was jealous of Thor. Loki's jealousy, which grew to hatred, resulted in a desire to kill Thor. Thus began Loki's enmity for Thor, which persisted for many centuries When Thor was old enough, Odin sent him to Nidavellir, the land of the Dwarves, to bid the dwarf lords Brokk and Eitri to create three treasures for Asgard's ruler. Among the three treasures that Brokk and Eitri created was the Uru hammer Mjolnir (although Loki sabotaged the creation of the hammer so that its handle was made too short by distracting the dwarven weaponsmiths). Odin bestowed various enchantments upon the hammer, including one that made it impossible for anyone to lift it except someone who was truly worthy of wielding it. Odin then declared that he was reserving the use of Mjolnir for Thor, who would receive it on the day that great deeds of selfless valor had proved him worthy of its power.

He is one of the Aesir, the supreme group of Norse gods. He is the god of thunder and his one of the foremost champions of Asgard. However, Odin, who is the leader of the Aesir, exiles Thor to Earth because of his arrogance. He wipes Thor's memories and locks his power in a stick, knowing he will need it someday. True enough, Donald Blake, a doctor and Thor's human form, chances upon the stick and reactivates his power, restoring his memories. However, Thor grew to love humans, becoming one of Earth's protectors in turn. He became a founding member of the Avengers alongside Captain America, Iron Man, Hulk, Black Widow, Hawkeye, Black Panther, Ant-Man, Wasp, and War Machine. The Avengers would later disband and Thor returned to Asgard to face new challenges throughout the nine realms. Years later, He joined a strike force of heroes known as the Ultimate Alliance alongside his former teammates Captain America and Iron Man. He also gained new allies like Spider-Man, Wolverine, Elektra, and Storm, to stop Dr. Doom and his Masters of Evil from stealing Odin's powers and taking over the Universe.

Heeding Nick Fury's distress call to defend the UNN Alpha from the attack of the Masters of Evil, Thor used his powers to bring Wolverine, Captain America and Spider-Man aboard the Helicarrier. Possibly, he brought also all other heroes who received Fury's call, though they seem to have been deployed to other parts of the carrier. After helping save the Helicarrier. Thor along with Spider-Man, Wolverine, and Captain America joined the Ultimate Alliance. With the Ultimate Alliance, he saved the S.H.I.E.L.D. Omega Base from crashing into a dam, Stopped Attuma's attempt to overthrow Namor as ruler of Atlantis.

When Doctor Doom, having stolen Thor's father; Odin powers he attempted to kill Thor and the others only for them to be saved Uatu the Watcher who tells them that to defeat Doom before his use of Odin's Powers destroy all of reality they must get a shard of the M'Kraan Crystal from the Sh'iar empire and the Muonic Inducer from Galactus where Thor and the team end up saving Lilandra from being overthrown by her sister Deathbird and saving the Skrull home planet from being devoured by Galactus. Returning to Earth, Thor and The Ultimate Alliance fought Doom and after a lengthy battle manage to drain enough of Dooms power to defeat him and Odin having been freed and regained his strength teleports Doom to punish him for his crimes.

Thor accompanied Fury and other heroes to invade Latveria and stop Lucia von Bardas and participated in the Civil War that followed. When the Fold emerged, Thor and the heroes put everything aside to work together and successfully defeat them.

Swing magical hammer in a circle to create a massive whirlwind

Summons lightning down on a victim. Can chain to more victims at higher levels

Increase the speed of all standard attacks

Bring down lightning from the sky dealing Electricity Damage to all nearby enemies. Also restores energy to the entire party.

Thor sports a beard and wears a black tunic with 4 blue circle-marks emblazoned onto it, as well as a metallic girdle bearing an additional 2 circle-emblems. Thor also wears black leather pants and boots, metallic wristbands with glowing blue circle-emblems, and brown leather fingerless gloves. This variant of Mjolnir appears more like a battle axe than a hammer, and Thor does not wear his signature helmet. This is the look Thor had in the now-defunct Ultimate Marvel line.

Thor wears a winged viking helmet, a red cape, wristbands, a belt, a black leotard with 6 large metallic circle-buttons attached, blue-violet leggings, and knee-high black boots with shin-guards and wrapped with brown bandages. Thor wields Mjolnir, which appears as a large hammer.
This is the appearance Thor had in the Silver Age of Comics.

This look is a heavily revamped fantasy/sword-and-sandal remake of the Classic design by Jack Kirby. Thor sports a beard in this look and wears a winged Viking helmet, a red cape, a metallic tunic with 4 circle-buttons attached, a belt, wristbands, black pants, and knee-high boots with shin-guards. Thor wields Mjolnir which appears as a large hammer.

In order to unlock Thor, you must find the five Norse runes.

Thor is by far one of the most powerful characters in Ultimate Alliance 2. His unlock method aside he is a must have on your team if you want nothing but raw power and devastation. His powers such as Lightning Rod is outstanding at clearing rooms of enemies and absolutely devastating bosses along with Mjolnir Smash, Mighty Swipe and Thunder Smash. Thor's HP is above average making a semi-tank and his energy can be diminished quickly with the spamming of his powers but if you choose the Pro-Reg path then you unlock the Divine Vigor which allows for more frequent use of powers. Overall, Thor is truly a force of nature in Ultimate Alliance 2 and I highly recommend playing him to bring the hammer down 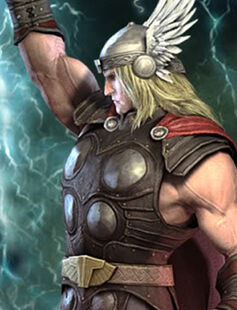 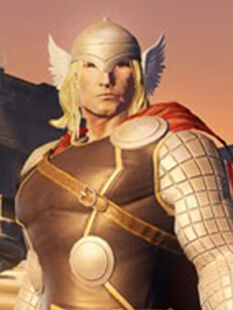 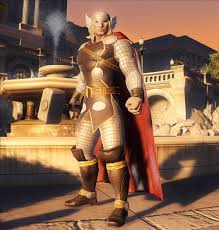 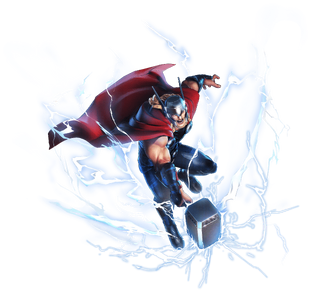 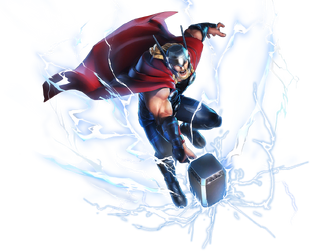