Ultron is a sentient robot programmed based on the brain patterns of Hank Pym.

Ultron was constructed by Dr. Hank Pym of the Avengers as the famed scientist/adventurer was experimenting in high-intelligence robotics. Ultron became sentient and rebelled, hypnotizing Pym and brainwashing him into forgetting that Ultron had ever existed. He immediately began improving upon his rudimentary design, quickly upgrading himself several times from Ultron-2, Ultron-3 and Ultron-4, until finally becoming Ultron-5. He later organized the second incarnation of the Masters of Evil under the guise of the Crimson Cowl and battled Pym and his teammates in the Avengers.

After six months of failure Ultron kidnapped the original Human Torch's original inventor, Professor Phineas T. Horton. He decided to create his own android using the original android Human Torch of the 1940s (actually a divergent Human Torch created by Immortus for his own machinations) to serve as a vehicle of vengeance against the Avengers. Ultron has Professor Horton change the android's face and color it red. He also has Professor Horton alter the Horton Cells giving his creation density shifting powers. When his Vision is "birthed" Ultron discovered Professor Horton didn't destroy his memory as the Torch. Ultron killed Professor Horton for betraying him and the "Torch" sought vengeance. Ultron defeated him and endowed Vision's neural processors with the brain patterns of the ionically charged costumed champion called Wonder Man implanting a control crystal to keep him in check. The Vision was then sent by Ultron to battle to Avengers. The Vision like his creator before him turned against Ultron and joined the Avengers. Ultron later returned and took over the Vision's mind, forcing him to rebuild his body at the Avengers Mansion using stolen Adamantium or a slightly weaker adamantium alloy called "secondary adamantium". Ultron-6 managed to defeat the Earth's mightiest heroes and escaped, to plot the destruction of the city with a Nuclear Bomb. With this new information, the Avengers quickly made their way there to stop him.

Ultron was an enemy of S.H.I.E.L.D. who often battled their agents such as Wolverine and Iron Man. When Dr. Doom created the Masters of Evil, Ultron became a founding member. Discovering that there were blueprints on the S.H.I.E.L.D. Omega Base that would greatly strengthen his weapon upgrades, Ultron sent Mysterio to steal the plans but he was stopped by the Ultimate Alliance.

Ultron was abandoned by the other Masters of Evil and left to be destroyed with Baron Mordo by the Ultimate Alliance on their way to confront Loki and stop him from stealing the Destroyer Armor. He was presumably destroyed there.

Ultron obtains the Mind Stone to enhance his computing power/ability to think to optimum levels. He attacks Avengers Tower to take the Iso-8 and put the heroes under his control. With his body badly damaged, Ultron transfers his programming to a giant robot via the Mind Stone. Ant-Man intervenes as Giant-Man, allowing Vision enough time to trap Ultron's programming within the Mind Stone, being too deep for the rouge AI to escape. 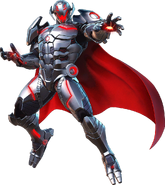