Superbot, The Computer, and Machine

Vision is a robot and knowledgeable ally in Marvel Ultimate Alliance, appearing as an exclusive playable character in the Game boy Advance version of the game.

The robot Ultron is the creator of the Vision, a type of android he calls a "synthezoid", for use against Ultron's own creator, Dr. Hank Pym aka Ant-Man and Pym's wife, Janet van Dyne (the Wasp) of the superhero team the Avengers. Ultron sends his new servant to lead the Avengers into a trap. The Wasp is the first to encounter the synthezoid, and describes it as a "vision" while trying to escape. Adopting the name, the Vision is convinced by the Avengers to turn against Ultron.  After learning how Ultron created him, using the brain patterns of then-deceased Victor Shade, a marine that was injured in Iraq in 2000, the Vision becomes a member of the team. The team initially believes the Vision's body was created from that of the android original Human Torch. The Vision wished to become an Avenger, so Captain America, Thor and Iron Man all attacked him to test his power. He passed the test, and they admitted him to their ranks. The Vision remembered that he had been created by Ultron to kill the Avengers. They went to Goliath's lab and Goliath remembered how he had created Ultron but had been attacked by him and made to forget the entire incident. They also noticed that Wonder Man's memory tape was also missing and realized that the Vision's mind consisted at least partially of Wonder Man's memories and brain patterns. 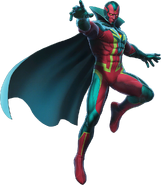 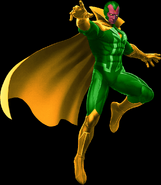