Wasp (aka Janet van Dyne) is a superheroine who appears in Marvel Ultimate Alliance 3.

Janet van Dyne was born in Cresskill, New Jersey on June 14th. The socialite daughter of wealthy scientist Vernon van Dyne. When her father is killed by an alien entity unleashed during one of his experiments, Janet turns to his associate Dr. Hank Pym for aid and convinces him to help her. In order to avenge her father’s death, she undergoes a biochemical procedure that grants her the ability to grow wings upon shrinking under four feet tall and uses a supply of "Pym particles" by which to change her size. Together, she and Ant-Man defeat the alien and avenge her father. Janet decides to remain as Wasp and be Hank’s partner as she has fallen in love with him and married him. During her time as Hank’s partner, she took part in numerous conflicts with villains who included the Porcupine, Egghead, and Whirlwind. Though initially without any offensive powers, Janet proves to be resourceful, using her ability to communicate with insects to fight, as well as using a pin to poke people as means of a weapon.

After the initial confrontation with Loki that brought together the founding Avengers, it is Janet and Hank who propose forming a team of superheroes. Janet suggests the name for the team and becomes a founding member. She also assisted Hank and Tony Stark in the creation of Ultron but, the android that would eventually become of the Avengers greatest enemies. One day, while he had still not fully mentally recovered from the stress of accidentally creating one of the Avengers' greatest foes Hank had a lab accident with experimental gases. These caused a reaction in him that broke his inhibitions down and induced a severe case of schizophrenia. Hank continued to have severe mental breakdowns to the point he lashed out, brutally striking her and getting into conflict with his fellow teammates. After this, Jan began divorce proceedings and resigned from the Avengers months before they officially disbanded. Even after hank got the help he needed from Tony, T'Challa, and Bruce Banner, the divorce was final and the two were no longer working together. 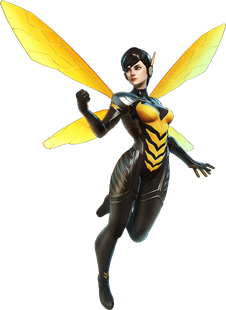 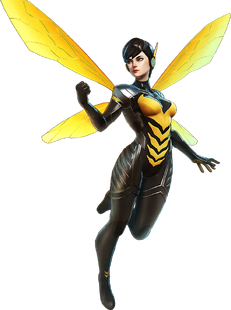