Steve Blum
Wolverine is a mutant and a member of the X-Men team. Famed for his regenerative healing and adamantium skeleton, Wolverine is gruff and aggressive. He had always been a starting playable character since X-Men Legends series, until Marvel: Ultimate Alliance 3 where the Guardians of the Galaxy were the starting characters.

Born at the turn of the 19th century, James Howlett, the man who would one day become known and feared as Wolverine, was a sickly child. But he was also born a mutant, gifted with the remarkable ability to heal virtually instantaneously from almost any wound he also had razor-sharp claws made of bone, a fact he first becomes aware of when, during a domestic dispute, he accidentally unsheathed his claws for the first time, killing his assailant. During World War II, Logan teams up with Captain America and continues a career as a mercenary. He serves with the 1st Canadian Parachute Battalion during D-Day, and later with the CIA before being recruited by Team X, a black ops unit.

As a member of Team X, Logan is given false memory implants. Eventually breaking free of this mental control, he joins the Canadian Defense Ministry. Logan is subsequently kidnapped by the Weapon X program, where he remains captive and experimented on until he escapes. It is during his imprisonment by Weapon X that he has adamantium forcibly fused onto his bones. James and Heather Hudson help him recover his humanity following his escape, and Logan begins work as an intelligence operative for the Canadian government's Department H.

Later, Professor Charles Xavier recruits Wolverine to a new iteration of his superhero-mutant team, the X-Men where he shares a relationship to Jean Grey with Cyclops. It was later revealed that Wolverine had been sent to assassinate Xavier years ago, but he later wiped Logan's memories and forced him to join the X-Men. Logan eventually found out about this and later left the team but was convinced to return by Storm, Jean Grey, Cyclops, and Rogue. Due to his strong bond with them, he returned particularly because of Jean his friendship with Xavier was strained for a while but he later forgave him for it. He later joined the Ultimate Alliance along with Spider-Man, Captain America, Storm, Elektra, Iron Man, acting as a core member and the other X-Men joined as well.

Wolverine, along with Thor, Captain America, and Spider-Man, was one of the first heroes to respond to Nick Fury's call to defend the UNN Alpha from the attack of the Masters of Evil. He is shown to be a little hostile towards Captain America for no reason but the only possible reason for this is the captain's time frozen after WWII in 1945. He is also considered the wildcard of the team due to a lack following orders but he proved to be a valuable asset for the team. After saving the Heillcarrier from being destroyed, he became a core member of the Ultimate Alliance along with fellow X-man Storm. He was later on the mission to the Omega Base where he is reunited with his old ally Dum Dum Dugan. While on the Omega Base, if the player lets the Super Soldiers destroy the computer containing the Legacy Virus information, Wolverine will be shown among the dead viral victims in a possible future depending on the player's actions.

A casual set of clothes consisting of a light grey T-shirt with a ripped "bullet hole" on the left part of the chest area, in addition to denim jeans, a leather belt bearing the symbol of the X-Men surreptitiously in the buckle and military dog-tags.
Environment Damage - Increases the amount of damage done with weapons or throws
Max Energy - Increases the maximum energy

The most popular and well-renowned version of Wolverine's original costume, a leather-and-spandex arrangement made from a yellow-and-brown sleeveless shirt, brown shorts with yellow leggings, brown knee-high boots, and elbow-length gloves, and a red belt. Wolverine's gloves are designed to contain openings over the knuckles to allow for smooth unsheathing of the feral mutant's adamantium claws without tearing the fabric, while his shirt comes attached to his distinctive, horned cowl.
Claw Damage - Increases damage done with claw attacks
Critical Strike - Increases critical strike chance

The most popular and well-renowned version of Wolverine's costume from the Astonishing X-Men series, a leather-and-spandex arrangement made from leather-and-spandex costume is comprised of a yellow-and-blue sleeveless shirt and pants, blue boots, a belt, blue leather elbow-length gloves, and blue shoulder-pads. Wolverine's gloves are designed to contain openings over the knuckles to allow for smooth unsheathing of the feral mutant's adamantium claws without tearing the fabric, while his shirt comes attached to his distinctive, horned cowl. There also exist yellow rubber protrusions on his boots and the cuffs of his gloves.
Health Regen - Increases health regeneration
Bleed Damage - Adds a chance to add bleed damage to all melee attacks(Maxes out at 15% bleed damage and 15% bleed chance)

This is the look that Wolverine possessed in the Ultimate Marvel line, in essence a variation on a standardized design for male X-Men characters. This costume consists of a form-fitting, black leather sleeveless shirt with an X-emblem in the area of the left part of the chest, military pants, boots with yellow straps, a yellow utility belt with an X-emblem buckle, black rubber gloves, and striped black-and-yellow shoulder-pads. Wolverine's gloves are designed to contain openings over the knuckles to allow for smooth unsheathing of the feral mutant's adamantium claws without tearing the fabric.
Max Health - Increases maximum health
Rage Focus - Increases the length of time the Rage state lasts

Leaps into the air, slashing in all directions. (wounding damage)

Dashes forward, viciously striking any in his way. (wounding damage)

Enraged, impales foe and slams them into the ground. (wounding damage)

Allows for more frequent use of powers. Requires Pro-Reg. 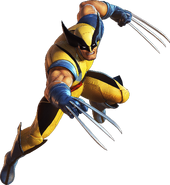 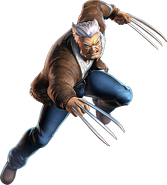 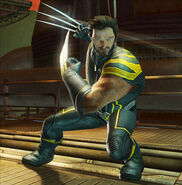